Crews were called to the scene of a massive barn fire in Macon County overnight.

Crews were called to the scene of a massive barn fire in Macon County on Thursday.

The blaze was reported at a farm on Lick Branch Road located between Lafayette and the Kentucky border.

Firefighters with the Lafayette Fire Department said this was one of the largest fires they’ve ever had to fight.

Video from the scene showed heavy flames that could be seen for miles. Thick smoke was also billowing from the area. 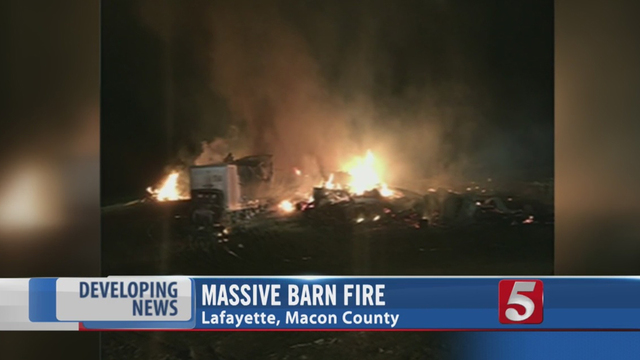 The farmer who owns the property drove through the night to find complete destruction at daybreak.

"We had basically everything, all of our farming equipment stored in here," Terry Jenkins said.

Jenkins said he was staying in Indianapolis to go to an equipment auction in Illinois.

"We had probably 9 tractors, 2 sprayers, a combine, a combine head, roughly 300,000 tobacco sticks, 30,000 tobacco trays, our barn we use it in the off season for storage facility when we're not carrying tobacco in it," Jenkins said.

Jenkins said the majority of his farming equipment was in that barn.

"They say when it rains it pours, we had six greenhouses fall when the big snow comes 6-8 weeks ago but we made it through that so I suppose we'll make it through this," Jenkins said.

Jenkins said they are known around town as "Big Triplet Farm."

"We produce burning tobacco, corn, soy beans, and some cattle. Do a little of everything to stay alive here on the farm... We just finished building the shed on it about two weeks ago. To get it all dry then this happened."

Jenkins said he has insurance on some equipment, but not on everything.

"Pretty distraught, you don't never know when it's going to happen to you... The good lord won't put more on you than you can stand so just keep us in your thoughts and prayers."

Firefighters are still investigating the cause of the fire. Jenkins estimates the damage will cost hundreds of thousands of dollars to replace.

"Our barn was roughly $300,000 dollars of what it will cost to replace it, and equipment I'd just have to pull invoices, I really have no idea."