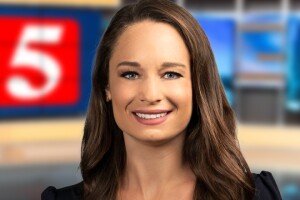 She grew up in Nashville and owes much of her education to the sisters at St. Cecilia High School and the staff at St. Paul Christian Academy.

At WBND in South Bend, IN Alexandra was nominated for several Emmy awards for a Michigan prison break, a story on a controversial pizzeria, and weather coverage.

As the Michigan beat reporter, Alexandra uncovered a federal investigation into a lead abatement program after discovering that $2,000,000 of federal grant money was missing or misplaced.

Alexandra also helped out with sports in South Bend. A highlight was covering the Notre Dame Men’s basketball team in March Madness as they went to the Sweet 16 and advanced to the Elite 8 tournament.

She was also part of a pilot program to test a new live backpack that she would plug into her camera to go live on television.

As a “multimedia journalist” she can shoot, write, edit, and report on her own stories. She takes pride in the fact that she single-handedly covered Benton Harbor, Michigan which at one time was one of the most dangerous cities in America.

Before landing a job at WBND, Alexandra attended the University of Georgia earning a Digital and Broadcast Journalism degree with a minor in Spanish.

During her time at UGA Alexandra was picked up by ESPNU as a campus connection student reporter. She was also an on-air sports intern for www.georgiadogs.com covering a lot of Georgia Bulldawg baseball and tennis. She’s excited to make it to some football games now that she’s back in the dirty south.

Alexandra also interned at Inside Edition through connecting with Tridelta sorority sister Deborah Norville. Most importantly, Alexandra’s first internship was with NewsChannel5’s Talk of the Town. She fell in love and was determined to make it back.

In her free time Alexandra loves to volunteer. She has been on several mission trips where she’s worked with orphans in Nicaragua and the Dominican Republic.