A Memphis couple has been reported missing after the deadly wildfires in Sevier County. Their three sons were taken to Nashville for medical treatment.

A Memphis couple has been reported missing after the deadly wildfires in Sevier County. Their three sons were taken to Nashville for medical treatment.

Family friends have confirmed to NewsChannel 5 that Jon and Janet Summers were vacationing in Gatlinburg with their sons, Branson, Jared and Wesley, when they were forced to evacuate.

As they were fleeing, the family became separated after they were unable to continue traveling in their vehicle, according to a family friend.

The siblings reportedly ran through the woods and were later taken to Vanderbilt University Medical Center. Jon and Janet have not been seen since.

According to family members, the Summers have ties to Middle Tennessee. Jon and Janet live in Memphis, while their sons currently live in Nashville.

Janet Summers posted a photo on her Facebook page Monday afternoon - just hours before the wildfires began to spread - describing the conditions, saying "we are in an odd space with little visibility, ashes floating." 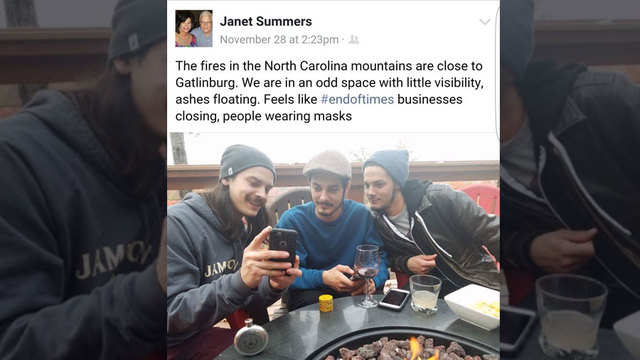 Wednesday afternoon, those with the family released the following statement:

“The Summers boys are stable, and one of them has been able to talk briefly and share his feelings and concerns for his brothers and parents. We have family and friends coming in from all over the country to be here with us. So many have expressed the desire to assist, and a website has been set up for the benefit of the boys.

We are so grateful for the outpouring of love and support by so many people, and look forward to the continued recovery of Branson, Jared and Wesley.

We continue to pray that Jon and Janet are found and we thank everyone for your kind thoughts and prayers.”

For anyone who would like to help out, they've set up a YouCaring page to donate to the family. Click here to donate.

Those with the Tennessee Bureau of Investigation said they've set up a hotline in an effort to coordinate missing persons reports during the wildfire response.

Anyone needing to report a missing person in the areas affected by the wildfires in Gatlinburg, Pigeon Forge, and Wears Valley has been asked to call 1-800-TBI-FIND (1-800-824-3463).