Reports released Saturday stated a mother has passed away. She was desperately sought, along with her two daughters, after they went missing in the wildfire in Sevier County.

According to WVLT in Knoxville, the body of Constance Reed has been recovered from the wildfire. The announcement was made by the Reed family’s pastor around 1 p.m. Saturday.

WVLT reported the pastor confirmed the Sevier County Sheriff’s Office notified the family, but officials had not yet confirmed if they had found the Reed’s two daughters, Chloe and Lily.

The three had been separated during the fire Monday night from Constance’s husband, Michael, who had been searching for them ever since.

Officials said it was apparent Constance had tried to flee from the fire on foot when she was overcome.

WVLT reported the church has set up a fund for the Reed family. The Reed Family Relief Fund can be found by clicking here.

Authorities have not confirmed that the two bodies were identified as Chloe and Lily, but a family member confirmed their deaths. News outlets were still waiting for official word from authorities in Sevier County. 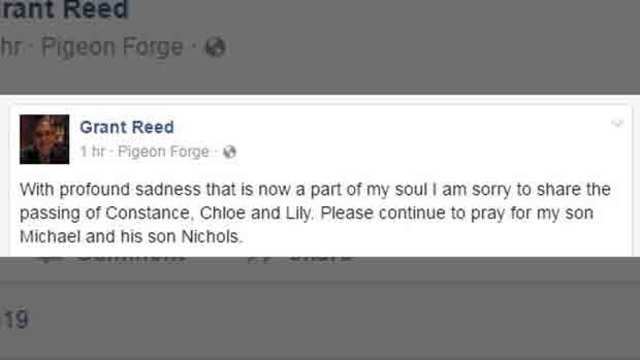 The Reed’s also lost their home to the fire.