Big changes could be coming to outdated and cramped public libraries across Davidson County.

Big changes could be coming to outdated and cramped public libraries across Davidson County.

The Nashville Public Library Facilities Master Plan has called for eight new library branches and the relocation and reconstruction of seven locations through 2040.

Larry Price, Assistant Director for Branch Services, said the area libraries have been seeing a lot of traffic, and he has expected the number of visitors to continue to rise.

“With the explosive growth Nashville is experiencing, we would be remiss if we weren’t planning to grow the library services to meet that expanding population,” said Price.

The plan also addressed areas called “deserts” where there is no library nearby. Price said the goal has been to ensure every Davidson County resident has convenient access to a facility.

Price said ideally each library branch would feature 25,000 square feet, have an open and modern design, and feature space for program areas and public meetings.

The plan would mark the biggest library expansion since the 1990s.

The cost of the plan was unknown since it would span 25 years; however, it would require money from Metro. Funding has been in place to renovate the Madison branch in the fall and for a new Donelson branch.

The map below shows how both growth and preservation fit in the plan: 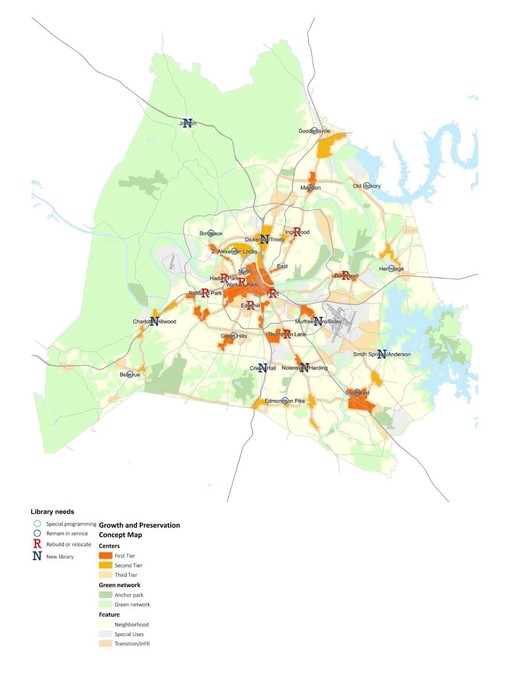