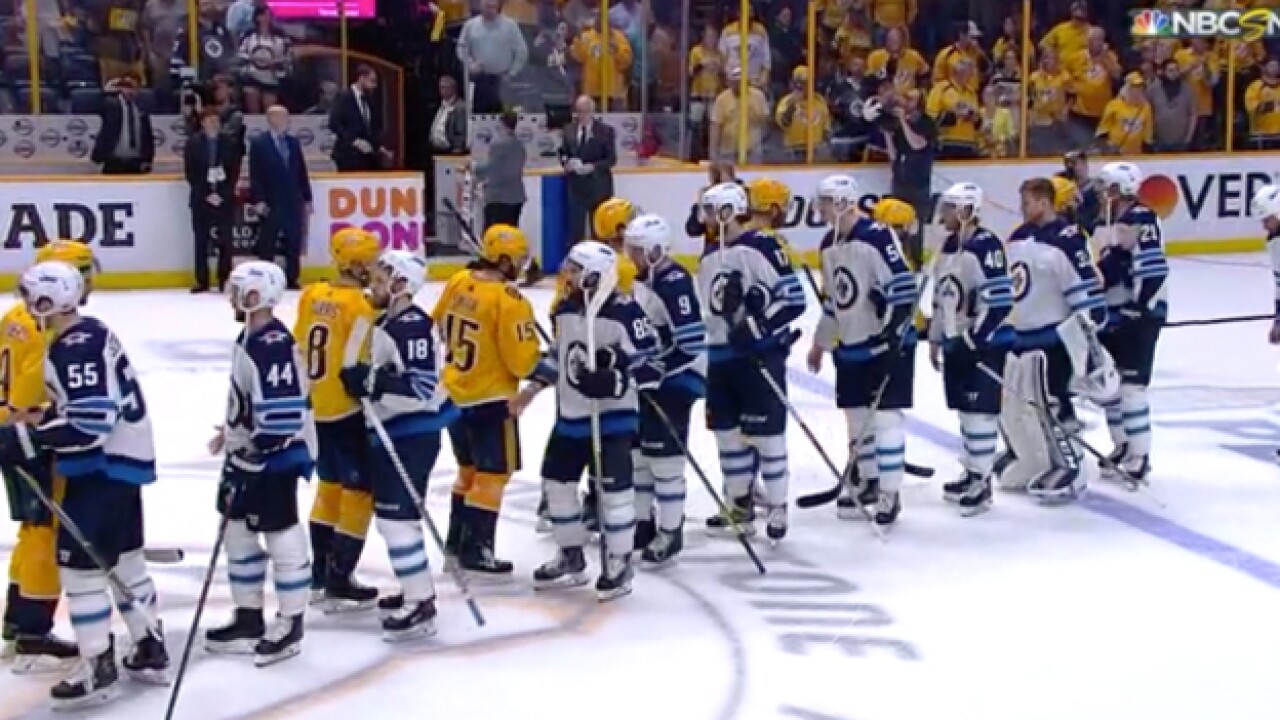 The Stanley Cup parade many people envisioned down Broadway in mid-June will not happen. The Predators will have to wait until at least next year after the team’s unexpected second round exit from the playoffs at the hands of the Jets.

I hesitate to call the season a failure because the Preds set franchise records with 53 wins and 117 points. That’s unprecedented success, not a lack thereof. The banners they’ll raise next October for a Central Division title and a President’s Trophy will bring the total number of banners hanging in the Bridgestone Arena rafters from one to three.

That doesn’t seem like a bust, but the disappointment is real after this team came within two games of winning the Cup last June and was virtually everyone’s pick to take it home this year. Is it fair to judge an entire season based off of the result of one playoff series? Perhaps not, but the Preds have only themselves to blame.

They pointed to the playoffs all year long. On day one of training camp the mission was winning home ice advantage for a playoff run. During a midseason slide, they calmly brushed aside concerns, saying that the only thing that really matters was the playoffs. Then during a March hot streak they seemed ready for the season to end and the playoffs to start right then.

So you can’t fault fans or media for judging this season by that same criteria.

The Preds wanted home ice advantage and got it, but then squandered it by losing an almost inconceivable four of seven games in Smashville during the playoffs. They lost at home three times to the Jets, including Thursday’s 5-1 season-ending loss in game seven.

They wanted to be ready for the playoffs, yet when it came they failed to click on all cylinders and were sent home by a team that, in a wild, back and forth series, was simply better than them for most of it.

The Predators didn’t spend the season talking about a division title or the President’s Trophy. Everything they talked about was about being in the best position to make another run at the Cup. Now they’re out less than halfway to that goal and a great  seven months seems hallow.

Last year’s run seemed so fulfilling. The Bridgestone Arena crowds kept getting louder, the parties outside kept getting bigger and the team kept winning. They won 14 playoff games last year, one more game than they played this year, and went 9-2 at home.

That team maxed out its potential. And, even when it was over, left you feeling like the future was incredibly bright.

The window is still very much open for this team that has so much of its core locked up into the future. But this Predators team, as deep and talented as it was, lacked the “it” factor that last year’s team seemed to have in spades. Maybe it was all the expectations and the pressure of being the favorite, but Nashville only managed a few really good playoff performances this year, and never did it in back to back games.

Vezina favorite Pekka Rinne struggled in goal, the team’s vaunted defensive corps got outplayed by the Jets and a highly productive second line in the regular season was missing in action in the playoffs with just 11 combined points in 13 games.

As all that happened fans got nervous. Bridgestone Arena still motored along at ear-drum rattling levels, but it never seemed to be able to find that fifth gear that it moved into time and time again last year. Perhaps because the Jets just looked like the better team in all four games played in front of them.

And that’s the thing, the Predators aren’t going anywhere but neither are the Jets. These are division rivals that will likely keep seeing each other early in the playoffs. Nashville will need to beat Winnipeg to get to where it will ultimately want to go.

It’s not easy to win the Stanley Cup, and it’s not supposed to be. That’s why it’s the most coveted trophy in all of sports.

The Predators have found that out the hard way in back to back seasons. The only difference was last year felt like they just fell short, while this year feels like they were defeated.