Three people were killed, and many homes were damaged or destroyed as tornadoes hit Tennessee.

The system that moved across the country brought record-high temperatures, strong to severe storms, and the threat for tornadoes to Middle Tennessee on Wednesday.

According to the National Weather Service, possible or likely tornadoes touched down in four areas: Linden in Perry County, Lutts in Wayne County, Lawrenceburg in Lawrence County, and Gordonsville in Smith County.

The Perry County Sheriff told NewsChannel 5 that two people were found dead in storm debris. He said the man and woman were found underneath the rubble of their home in East Perry County.

The two victims were identified Thursday morning as 70-year-old Antonio Yzaguirre and 69-year-old Ann Yzaguirre. Authorities said the two had moved to the area to retire and had just celebrated their 36th anniversary on December 16.

The Perry County Sheriff confirmed a tornado swept through the area destroying many homes in its path.

On Thursday, officials with the Tennessee Emergency Management Agency confirmed a third death happened in Rhea County where a 22-year-old man was killed. No further details about his death were available.

About 500 people were without power, and may not be restored until the morning. Multiple crews from Wayne Co. and TEMA assisted victims. Some crews from Alabama also helped.

Among the many buildings damaged was the Lutts Post Office which was completely destroyed. 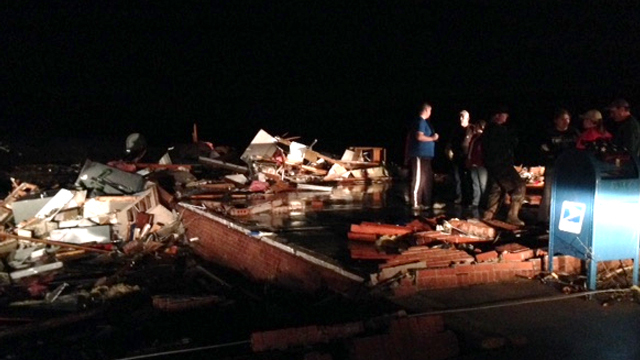 McNairy County also saw a lot of damage to homes, power poles and vehicles. Hunter Fowler shared these pictures with NewsChannel 5 on Twitter.

The storms came through Middle Tennessee around 6 p.m. Wednesday and have lasted until 9 p.m.

Tornado warnings were issued for all of Middle Tennessee. Hail was reported in downtown Memphis, and tornado devastated an area of Northern Mississippi  around 3:30 p.m. where a young child died.

To see all of the region's active weather alerts, click here.

The Tennessee Emergency Management Agency declared a Level III State of Emergency in response to the storms. Damage was reported in multiple counties.

You can find information on how to help the families caught in Wednesday's storms by clicking here: NewsChannel 5 Partners With Community Foundation For Storm Assistance

Mayor Megan Barry encouraged Nashville employers to send their workers home early Wednesday ahead of the storms. The city also activated the Emergency Operations Center (EOC) at 2 p.m. to prepare for any damage they may bring.

The greatest threat associated with these storms would be heavy rain, wind and hail; however the possibility of tornadoes cannot be ruled out at this point.

Throughout the day, temperatures were expected to reach near 70 degrees, and could surpass a record set more than 80-years-ago.