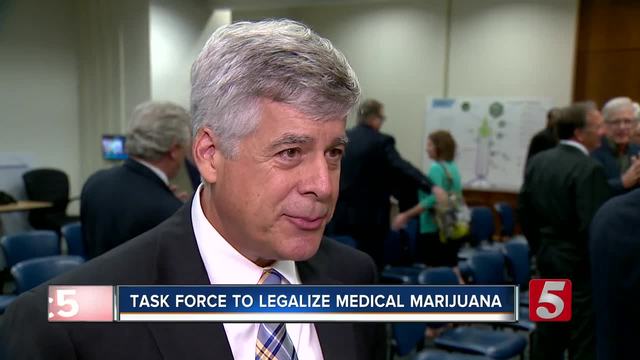 The Joint Committee on Medical Cannabis met for the first time Thursday to discuss what options the legislature has to legalize medical marijuana in the next session.

The Joint Committee on Medical Cannabis met for the first time Thursday to discuss what options the legislature has to legalize medical marijuana in the next session.

A panel made up of state representatives and senators listened to testimony from law enforcement, Tennessee Department of Health staff, various doctors, and experts. The committee was requested by House Speaker Beth Harwell, among other lawmakers, like state representative Jeremy Faison.

"I feel like it's the same arguments that we've heard historically. I feel like the deeper we get into this over the next couple of months, the arguments have no foundation," said Faison. "When it comes just to the strict use of the medical grade cannabis, it's a great benefit all the way around for the state."

The room was packed at Tennessee Tower with supporters and opponents, plus people who have a direct interest. Stacie Mathes has been wanting legal medical marijuana to stave off her daughter Josie's many seizures.

"We're grateful, by far, that we have the CBD. But there are conditions and Josie's included that do apply for more THC," said Mathes. Josie started taking CBD oil, a derivative of marijuana, when it was legalized two years ago. "We have multiple seizures everyday, but a huge reduction, 500 to 1,000 seizures everyday down to 30 on a good day."

Josie is only three years old.

"We support doing additional research. The FDA, more the DEA from our perspective, has traditionally been, for 100 years, has been an organization that exemplifies getting us safe and effective medicines," said Reagan. Until marijuana's schedule one designation changes, Reagan said he doesn't think it will be studied to the level it needs.

The next task force meeting has been scheduled for October. According to Representative Faison, they hope to introduce people who have directly benefited from medical marijuana.