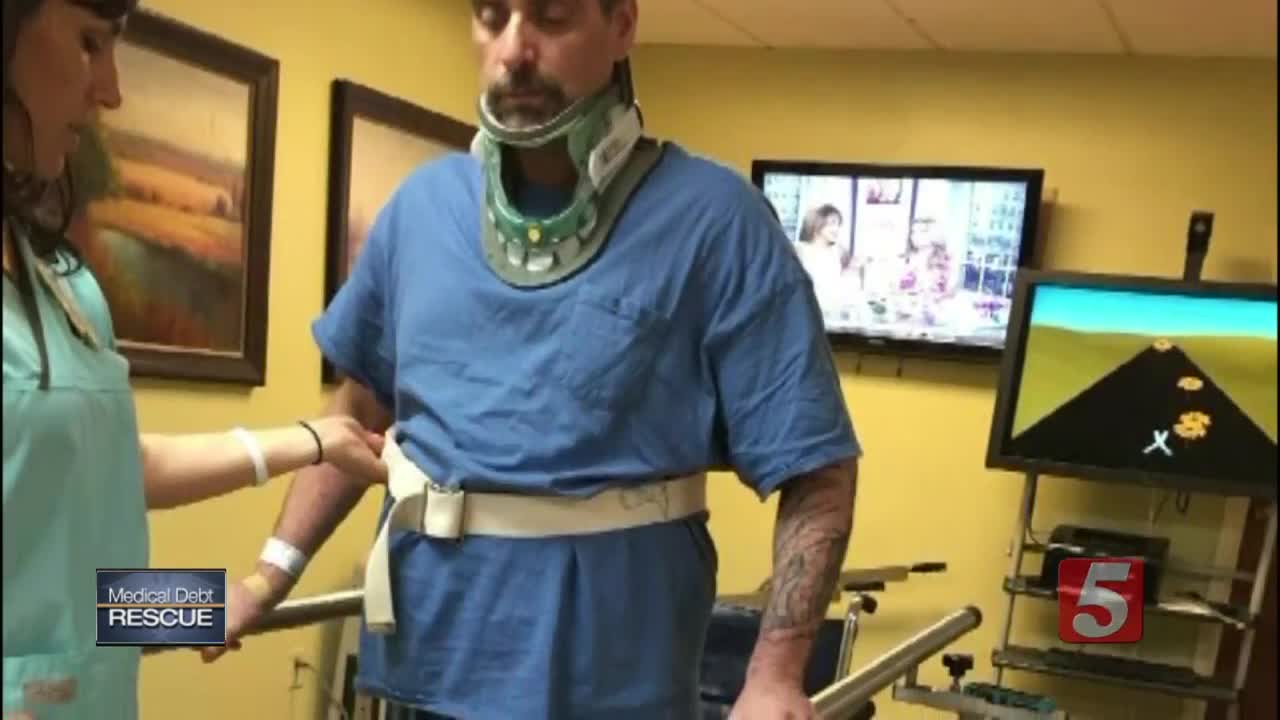 Gary Brown’s has a medical debt he can’t afford. Brown estimates he owes $500,000 dollars. There are days Brown sees no way out. 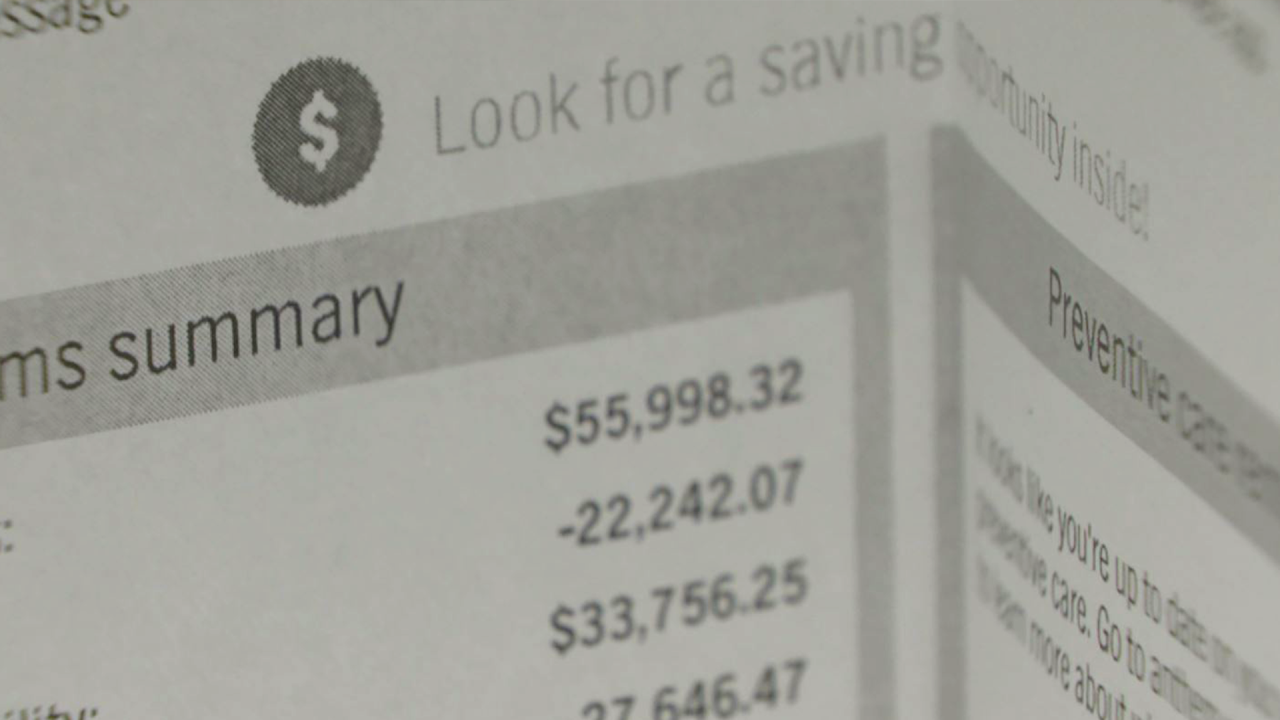 This story is part of NewsChannel 5’s community initiative known as “Medical Debt Rescue." The goal of the project is to shed light on a lopsided medical debt system that has left thousands of Tennesseans with crippling debt and forced many into foreclosure, while also wiping $1.8 million dollars of medical debt in Middle Tennessee. Learn more about the initiative here.

NASHVILLE, Tenn. (WTVF) -- The asphalt county road Gary Brown walked down seemed to stretch on for eternity, yet all he could focus on was putting one foot delicately in front of the other.

His breaths were labored, his eyes focused on the pavement, his movements methodical. As he took a step forward, Gary Brown’s hands came out to his sides to steady his unsure body.

This is what it takes for Gary Brown to walk to his mailbox.

It wasn’t always like this for Brown. There was a time just two years ago when the 48-year-old had a full-time job as a welder. Simple tasks like walking his dog didn’t require this tall, husky man with a pulled back ponytail to take a break from walking simply because he ran out of breath. But that was before the accident.

Brown’s story is one thousands of Tennesseans share, one of a medical debt he can’t afford. Brown estimates he owes $500,000 dollars. He can’t work and his only form of income is through disability, which means most of his debt is in the hands of collection agencies.

There are days Brown sees no way out.

An avid motorcycle rider, Gary had left dinner with some friends back in May 2016. He was less than five miles from his home in Unionville when he suddenly went off the road. Gary’s motorcycle hit two driveway culverts, Gary was thrown off the bike.

He landed a few feet away from a sign in a homeowner’s front yard which read, “Prepare to meet thy God.”

“I landed in the middle of the road, head first. I broke my neck and had trauma to my brain,” Brown said.

Brown was airlifted to Vanderbilt University Medical Center after the crash, where he spent months learning to walk, talk and even swallow again. Every day, he said, was a painful struggle to try and overcome his injuries.

Then, Brown lost his job. “They terminated me because I couldn’t perform my job, so there went my health insurance, I had no coverage,” he said.

“It’s mentally draining. It’s devastated me. I worked so hard for everything. Why didn’t I die right there on the road that day?” Brown said.

Once the bills started piling up, they didn’t stop. Two years after the crash, the 48-year-old still can’t work. There’s a lien on his home. And there are days when he sees no way out.

"I dream about it. I think about it all the time. I want to pay my debt, but I don’t know what else to do. I’ve run out of options,” he said.

“The system is broken and people don’t even know about,” Gary said as his eyes glances down at a pile of medical bills.

In 2018, a majority of Americans said they wouldn’t be able to afford a $400 medical bill. For decades those with insurance thought they could depend on employer-paid coverage to help offset everything from hospital visits to a simple trip to the pediatrician. But rising health care costs have meant more and more employers shifting to higher deductible health insurance plans, a change that has left consumers to pick up a rising portion of health coverage costs.

Studies show that those in this country who carry the most amount of medical debt are people who have insurance.

“Healthcare costs are growing greater and greater over time,” said Melinda Buntin, a Health Economist at Vanderbilt University Medical Center in Nashville. “Healthcare coverage has gotten skinnier. With auto insurance or home insurance, we know those are there for the unforeseen, but with health insurance we get lulled into this false sense of security. And we may not pay attention to what’s actually covered until we need it most.”

One in four adults say they’ve had trouble paying medical bills in the last year Buntin said. In most instances, like Brown’s case, folks have typically lost their jobs due to injuries or illness. Once that happens the downward spiral into medical debt typically begins. With no insurance, the bills continue to pile up.

“It’s this avalanche of things that can happen when you get ill, and that’s very scary for people. We developed this system to the point where it’s unaffordable for a growing part of our society,” Buntin said.

With shrinking or no coverage, many Americans and Tennesseans end up relying on Emergency Rooms for their medical needs. In Tennessee alone, at least nine hospitals have shutdown over the last few years because they have been overburdened with costs from patients who never pay their bills.

And that is where the medical debt system becomes more complex for thousands Tennesseans, stuck in a crippling maze of debt.

For example, if you go out to a nice restaurant, the server brings you an itemized bill. The bill shows the cost of the appetizer, the main course, the dessert – maybe even the coffee.

But when a patient leaves the hospital, it’s more like an expensive five-course meal with no menu, and not getting the bill for 60 days.

“The patient has no idea what they owe when they leave the hospital,” said David Frederiksen, CEO of Patient Focus, a medical billing assistance group based in Nashville.

Nearly one in every four Tennessans has medical debt, according to the Finra Investor Education Foundation. That debt often means patients are forced to make impossible choices.

How NewsChannel 5 is helping

The system is so lopsided that through the non-profit group RIP Medical Debt, NewsChannel 5 was able to help hundreds of Tennesseans eliminate some or all of their medical debt.

With a $15,000 donation, NewsChannel 5 wiped out $1.8 million in medical debt for 604 people across Middle Tennessee. There are no strings attached.

Because the chances of collecting any kind of money from those who owe are so low, debt buyer are willing to accept pennies on the dollar. Or in this case, $15,000 to erase $1.8 million in debt.

“You’re not looking at a real market here. And unfortunately, it’s putting a lot of people into bankruptcy,” Frederiksen said.