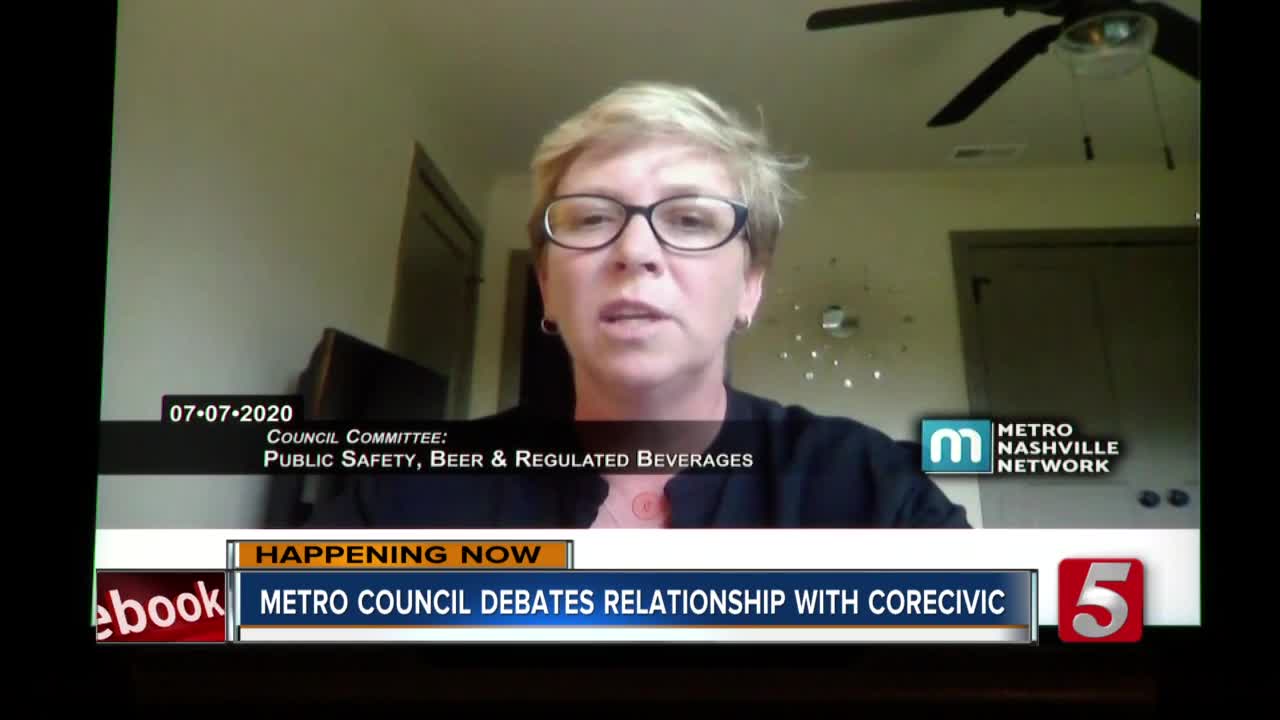 NASHVILLE, Tenn. (WTVF) — It may feel like they're back at square one for Metro council members, but some members say they plan on doing whatever is necessary to meet the 90-day deadline given by CoreCivic on Monday.

On Tuesday, council members met to discuss what to do next after CoreCivic gave them 90-days notice in a scathing letter addressed to Davidson County Sheriff Daron Hall.

In early committee meetings, councilwoman Emily Benedict announced she would defer her bill which would effectively end the nearly 30-year relationship with CoreCivic. The bill also details how the city the transition will have what city leaders are calling, a minimal impact on the city budget.

Benedict had planned to present her and her collegues' findings at Tuesday’s meeting but instead, she says she will defer the bill indefinitely. However, that doesn’t mean she won’t call the bill back for a vote as soon as the next council meeting.

In the meantime, Benedict tells us she’s had multiple conversations with Sheriff Hall on how to proceed knowing both parties have made it clear to council they need at least 9-12 months to transition responsibly.

“The whole reason why we need to take 9-12 months to transition is to take care of the inmates and their safety and to do our best to transition as many workers, guards and staff who would like to transition into civil service," said Benedict. "I don’t want to lose a single employee that’s there unless it’s just the right decision for the employee or if they’ve just not been a good performer. This legislation is designed to make sure the inmates are kept completely safe with no disruption due to the transition. 90 days does not give us enough time. They seem to be more focused on burning a bridge, then they do on the safety of their inmates."

The intention was to sign another short-term contract with CoreCivic once their initial contract expired later this month. However, CoreCivic says back in May the city was ready to award them a five-year contract they were negotiating.

What’s happened in the past couple weeks, they say, is purely political.

In the letter, the company says it first learned about Sheriff’s Hall’s support for ending the relationship with CoreCivic through media reports of the press conference held by Council members Benedict and Freddie O’Connell.

CoreCivic officials accuse the sheriff and others of pushing an agenda that’s “void of fact.” Instead suggesting that if and when operations are transferred, taxpayers should expect to be left with the bill for millions of dollars.

CoreCivic continues on to say contrary to what the council members have said, it’s their policy to “not draft, lobby for, promote or in any way take a position on proposals, policies or legislation that determine the basis or duration of an individual’s incarceration.”

NewsChannel 5 reached out to CoreCivic and their public relations team who say their letter speaks for itself.

Council will now take the next couple weeks to discuss if three months is even feasible for having the sheriff’s office take over or if they have to find another solution.

All indications on Tuesday were that in spite of the limited time they have, the plan was to move forward with having the sheriff’s office take over the detention facility. It wasn't clear when that would happen. The bill will be revisited sooner, rather than later.

If you’re confused because you thought the sheriff’s office had always been operating the detention center, you’re not alone.

The sheriff’s office oversees the facility, but CoreCivic has been responsible for the day-to-day operations where they house local state inmates. As opposed to the jail facilities downtown where they house county inmates.