Metro Nashville Public Schools has defended its decision to dismiss students late after snow moved though the area.

Henson said the decision to continue with school was made at 5 a.m. because buses start their routes beginning at 5:30 a.m.

At that point, school officials made the decision to dismiss early. However, the announcement wasn’t Tweeted until after 8 a.m.

Many parents expressed frustration on social media about buses running when roads were already bad. 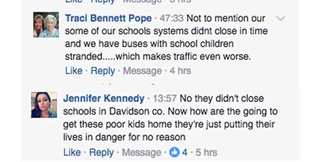 Henson said they’ll monitor students on a school by school basis to make sure everyone gets home. At least 750 buses transport some 50,000 students in the district.

Any students who did not attend school will receive an excuse absence.

“We’re sorry, we understand the frustration and we share that frustration,” Henson said.

Metro busses experienced slick conditions on the road. One bus crashed in South Nashville. There were students on board at the time, but no injuries were reported.

Another that also had students on board was caught on camera sliding down a hill, and narrowly being miss by a sliding snow plow.

Other parents were frustrated with over what they said were miscommunications over school bus service after school.

Aleah Downey, who lives in the western part of Davidson County, says her son was supposed to be on a bus Friday afternoon, but after miscommunications between her son's school and the Metro Schools bus transportation department, no one could tell her exactly where her son was.

That was when reports of that crashed bus started coming in.

"And then I was really freaking out," Downey said.  "Maybe his bus was one of the ones that crashed on the side of the road."

Downey's son eventually made it home safely.  He was not on a bus that crashed.

Good afternoon MNPS staff,
I am grateful to report that all of our students have been transported back home safely after this morning’s decision to dismiss early. I also want to sincerely apologize for the frustration and concern that today’s weather incident caused many of you.
Our inclement weather team was out traveling the roads across Davidson County starting at 3 a.m. this morning. By 5 a.m., they felt confident that road conditions were safe for bus travel. They were also watching weather forecasts closely, which indicated that the snow would fall further south and not impact Davidson County in the way that it has.
School closure decisions are primarily made based on whether or not we feel like it is safe for us to transport the 50,000 students who ride on our school buses every day. This morning, our operations staff made the best decision they could with the information we had at the time.
When the snow began to fall around 6:30 a.m., it quickly became apparent that the weather was not following the forecasts and that road conditions were becoming hazardous. By about 7:30 a.m., we began putting processes in place to dismiss students early. Students could not be dismissed immediately because we have approximately 750 school buses that make multiple routes to transport students of different grade levels. We also needed to give ample notice to families so that caregivers would be there when students were dropped back off.
These decisions are never easy. In retrospect, we could have started school late to give us more time to assess the situation. Using a two-hour delay is something we will certainly do in the future if this same situation occurs. For today, absences will be excused for any families who chose to keep their students at home. As a reminder, athletic events for Saturday have been canceled as well.
Student safety is always our top priority. Going forward, we will more intentionally err on the side of caution. At the same time, we will remain thoughtful about not closing unnecessarily causing us to lose valuable learning time.
I hope you stay safe and warm as we head into the weekend.
Sincerely,