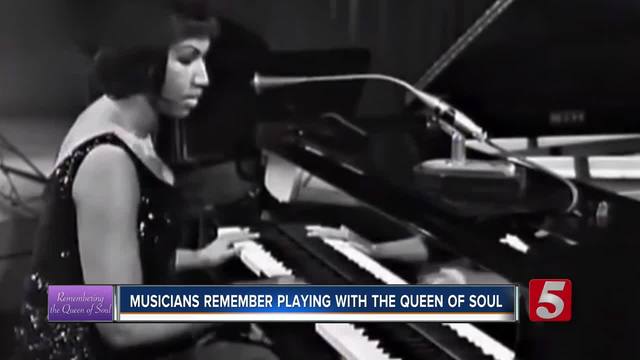 Every single person who heard Aretha Franklin sing recognized her unmatched talent, but for those who recorded her hits with her, experiencing her singing songs that will last forever for the first time was something they will never forget.

Every single person who heard Aretha Franklin sing recognized her unmatched talent, but for those who recorded her hits with her, experiencing her singing songs that will last forever for the first time was something they will never forget.

Aretha Franklin, the Queen of Soul, dies at 76 after battle with pancreatic cancer

"I was fortunate to get to play on her first hit record, 'I Never Loved a Man the Way I Love You,'" David Hood, studio musician, Swamper, and founder of Muscle Shoals Sound Studios, said.

Hood first recorded with Franklin at FAME Studios in 1967.

"Jerry Wexler brought her into the studio and had her play the piano and sing at hte same time, which is something that nobody else had done with her," Hood recalled. "All the musicians that worked with her get their feel from what she's doing on the piano, and also her vocals, and it's a very inspirational way to work."

"We did a song called 'Call Me' during a period when she was having marital problems, and as she played that song, tears were rolling down her face, and you're that close in the studio working with people, you feel their emotions, and you could feel her heart. She was having a heart break situation like that, and that was a great moment," Hood said, also recalling a time they recorded 'Let It Be' before The Beatles version came out. "We listened to Paul McCartney's vocal and piano demo and that's where we got our arrangement to record it with Aretha Franklin."

Everyone who worked with Franklin knew she was talented, but at hte time, they didn't know what impact her music would have.

"She's got a voice like no one else," Gene Chrisman, drummer and studio musician said. "No wonder she was called the Queen of Soul, because nobody could sing like Aretha."

Chrisman only spent one evening recording with Franklin in New York City in 1967, but that evening was a pivotal one.

Together, in the same room, they recorded "Dr. Feelgood," "Soul Serenade," and "(You Make Me Feel Like) A Natural Woman."

"Working with Aretha, it was such a pleasure," Chrisman said. "The way she played piano, you just almost fell into what she was doing."

Chrisman can be heard on B.J. Thomas’ “Hooked On A Feeling," Neil Diamond's "Sweet Caroline," Dusty Springfield’s iconic “Son Of A Preacher Man," as well as Elvis’s last #1 song, “Suspicious Minds”, as well as “Don’t Cry Daddy”, “In The Ghetto”, and “Kentucky Rain."

Hood worked with Staple Singers, Etta James, Wilson Pickett, The Rolling Stones, and many others in Muscle Shoals.

Both said that Aretha Franklin will be sorely missed, but they're happy they were able to play a part in having her music live on forever through recordings over the years.