It’s still unclear as to whether an animal was responsible for the mysterious slaughter of three horses and a dog in southern Kentucky.

It’s still unclear as to whether an animal was responsible for the mysterious slaughter of three horses and a dog in southern Kentucky.

The Monroe County, Kentucky Sheriff issued an alert over the weekend after the animals were all found dead in the Bill Butler Spur area.

Sheriff Dale Ford believes the three horses and dog were killed by a large animal, which is still at large.

However, the Kentucky Department of Fish and Wildlife told reporter Nick Beres they’d ruled out an animal attack. They said the neck wounds to the horses were likely caused by a sharp cutting instrument, not a tooth or claw that would have produced a more jagged edge. 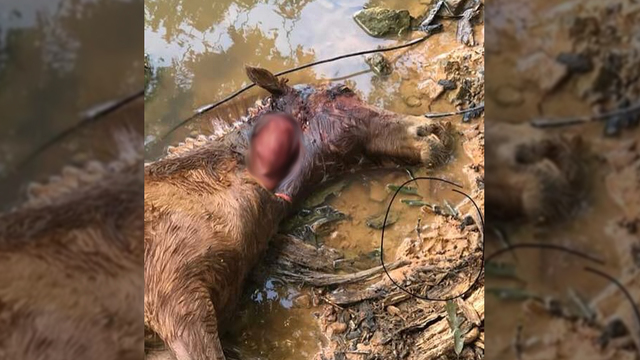 They also said the scene had no signs of a struggle consistent with an attack by a large predator – with no hunks of fur away from the carcasses.

Tall weeds in the corral were not knocked down and the fencing remained undamaged. They also said the attack does not reflect the behavior of a large wild animal, which would not kill multiple animals and then just leave the carcasses behind.

Sheriff Ford, though, still insists this was the work of an animal.