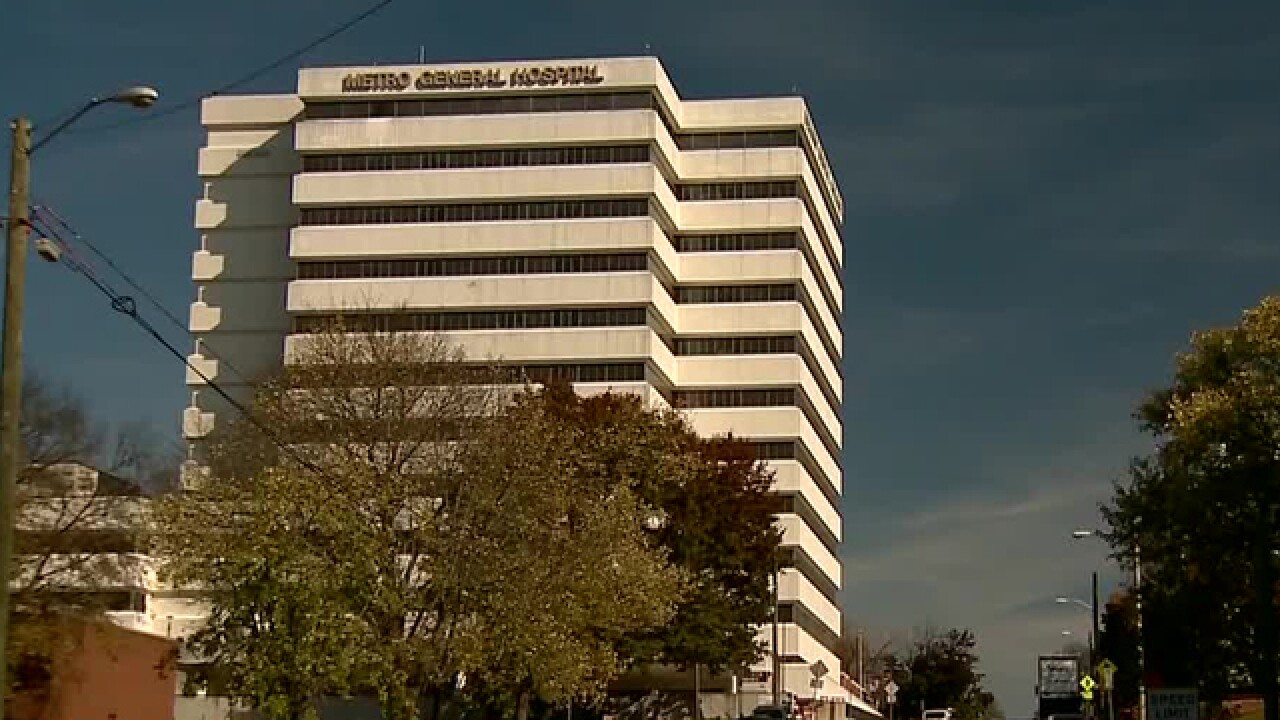 It's a move Finance Director Kevin Crumbo said has "cast doubt upon the integrity of financial reporting from Nashville General Hospital, and more broadly, Metro’s efforts to be transparent in its management of CARES relief to the community."

The accusation comes from a letter sent by Director Crumbo to Nashville General Chairman Joel Sullivan. In it, Crumbo says Nashville General Hospital Chief Financial Officer Bruce Naremore intentionally withheld disclosure knowledge of $9.4 million in federal CARES funding so that funding would not be reduced from the public hospital.

The city of Nashville was hit hard by the deadly March tornado as well as the COVID-19 shutdown. To help the city recover, city council members passed a budget which included a 34% property tax hike.

This year's budget included $43.1 million for the hospital which was the full amount requested by the Hospital Authority. Last year, Nashville General received a subsidy of $46.1 million and did not need midyear supplemental funding, unlike in recent years.

A couple of council members took to social media in response to the accusation.

"I’ve heard some about this in last few days from being budget committee chair. Early info is that this money has strings attached..and across the board, $$ with strings attached didn’t help the budget. So maybe this is a molehill not a mountain?"

"I believe strongly that Nashville should continue to operate a public safety net hospital. No other model answers all the difficult questions of indigent care as effectively. But current leadership can’t seem to deliver what we need in terms of fiscal competence."

Read the full letter below:

Thanks for sharing this correspondence with me. I truly appreciate your prompt attention to this matter, and I understand your efforts to determine the facts and circumstances are ongoing.

NGH is an important part of the community’s effort to meet the challenges of the lingering pandemic. In addition to continuing its normal services, NGH’s recent partnership with the state to expand capabilities for Covid-19 care elevates NGH’s importance to the community.

Since the Hospital Authority is meeting today, I am writing to clarify a primary point in your correspondence in advance of that meeting. I will collaborate with you on other points of clarification as needed after your meeting.

The primary point to clarify at this moment is my impression that NGH’s Chief Financial Officer Bruce Naremore intentionally withheld disclosure of the receipt of $9.4 million of CARES monies is not speculation. Rather, it was reported to me and Metro Deputy Law Director Tom Cross on Monday June 22nd by Naremore as well as NGH’s General Counsel Marc Overlock.

For background, it is noteworthy that NGH and Metro Finance conduct weekly teleconferences on NGH’s cash flow and upcoming financial matters. These teleconferences and other communications have included collaboration on two prior receipts of CARES monies of approximately $835 thousand in recent weeks. Collaboration on CARES monies across all Metro departments and related entities, such as public safety and schools, is essential for maximum community benefit. Like communities across the nation, Metro is diligently working to attain such monies from relief programs and to determine the most effective means for deployment.

It’s a challenging task to interpret the evolving guidelines and then balance community input with the speed of deployment. As you may be aware, Mayor Cooper and the Metro Council are in the process of forming a dedicated task force to address this challenge for CARES monies received by Metro.

On Monday June 22nd, Cross and I hosted a teleconference with Naremore and Overlock to question disclosure of the $9.4 million receipt. Bluntly put, Naremore and Overlock reported that NGH did not make any effort to collaborate on this receipt so that these monies would not be considered during the Metro Council’s deliberations of the Fiscal Year 2021 budget during the week of June 15th. Specifically, it was NGH’s belief that consideration by the Metro Council may lead to a reduction of the budget subsidy appropriation for NGH.

Instead, NGH decided not to communicate the receipt to Metro Finance in the same spirit as the prior two receipts, moved the monies from NGH’s normal operating bank account to an investment account on or about Monday June 15th, omitted the receipt from NGH’s weekly cash flow schedule transmitted to Metro Finance on Tuesday June 16th, and omitted the receipt from the weekly cash flow teleconference on Wednesday June 17th - even though the Wednesday teleconference was after the Metro Council adopted the Fiscal Year 2021 budget.

It is well-known that the Metro Council’s deliberations addressed significant controversies pertaining to revenues and spending due to Metro’s longstanding financial challenges and the recent impact of the spring storms and ongoing pandemic. I don’t know if knowledge of this receipt would have influenced the outcome of those deliberations, but NGH’s actions denied Metro Finance and elected officials the opportunity to consider it.

Because NGH has stated its purpose for not disclosing the receipt was to avoid consideration by the Metro Council during the week of June 15th, it does not seem plausible to me that:

(1) Disclosure was withheld because the federal guidelines for use were not clear to NGH. NGH is aware that Metro has dedicated personnel and advisors tracking existing and emerging federal guidelines that are readily available for assistance. While I am delighted NGH intends to engage its own advisors, Metro resources have been readily available for assistance in the meantime;

(2) Omission from the weekly cash flow schedule and teleconference was due to the “in arrears” weekly reporting cadence. The weekly reporting includes current cash flow and upcoming financial matters, and special items can be quantified and/or simply noted in text or discussion, as is the case every week when the discussion includes actual activity from the first days of the current week;

(3) Movement of the receipt to an investment account was for the purpose of segregation in the same manner that Metro has segregated its recent $121 million receipt. Naremore stated on the June 22nd teleconference that the investment account is not part of the weekly cash flow schedule, and accordingly, moving monies to the investment account would avoid reporting on that schedule. However, the history of moving funds in and out of this investment account is that those transactions have been shown on the weekly cash flow schedule. During the weekly teleconference on Wednesday June 24th (yesterday), Naremore further stated the monies are being held in cash or near-cash securities, and he was seemingly unaware of state requirements pertaining to the investments of public entities like NGH. I have asked the Metro Treasurer to assist NGH with compliance of state requirements.

Also, for the June 22nd teleconference, Naremore and Overlock repeatedly referenced discussion of the foregoing with NGH’s “Executive Team,” so I am puzzled how Naremore solely made the decision not to disclose the receipt to Metro Finance. Likewise, Naremore and Overlock repeatedly referenced concern that other NGH executives may spend the monies for purposes not allowed by the federal guidelines, but it seems to me proper internal controls would prevent such spending.

In any event, not disclosing the receipt in a complete, accurate, and timely manner denied Metro Finance the opportunity to evaluate the receipt and appropriately advise the Administration and the Metro Council during the now-closed budget process. It has cast doubt upon the integrity of financial reporting from NGH, and more broadly, Metro’s efforts to be transparent in its management of CARES relief to the community.

There is much to be considered now, including any other omissions in NGH’s reporting. Coincidently, my office is currently following up on the receipt and recording of certain lease payments we recently learned were remitted to the Hospital Authority, and I will let you know the outcome. I hope there is nothing further; however, as would be reasonably expected of Metro’s Finance Director, I have reported this matter to the Mayor’s Office as well as Metro’s Council Office, Audit Committee, and Internal Auditor. The Internal Auditor is determining a scope and process of review.

Finally, I encourage the Hospital Authority to independently review this matter and strengthen oversight of the receipt and use of these monies. More broadly, I encourage a review NGH’s financial reporting for any other omissions or activities that have not been accounted for. It may be useful to confer with your external auditor about this matter, as well as conduct a current review of compliance with internal control and ethics policies.

Thanks once more for sharing this correspondence with me. Like you and other members of the Hospital Authority, I believe it is important to inspire the public trust with complete, accurate, and timely financial reporting so that we can collectively measure and manage the affairs of our public health system. I look forward to working with you and the Hospital Authority to resolve this matter efficiently and effectively.