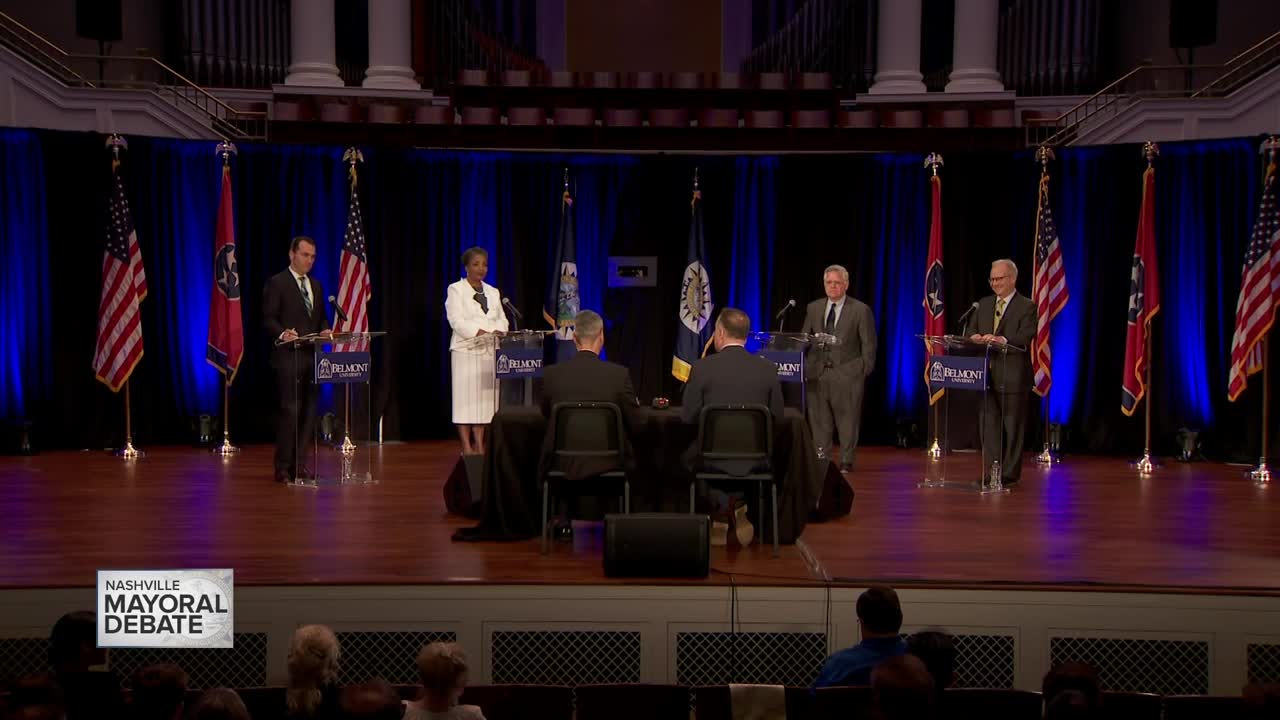 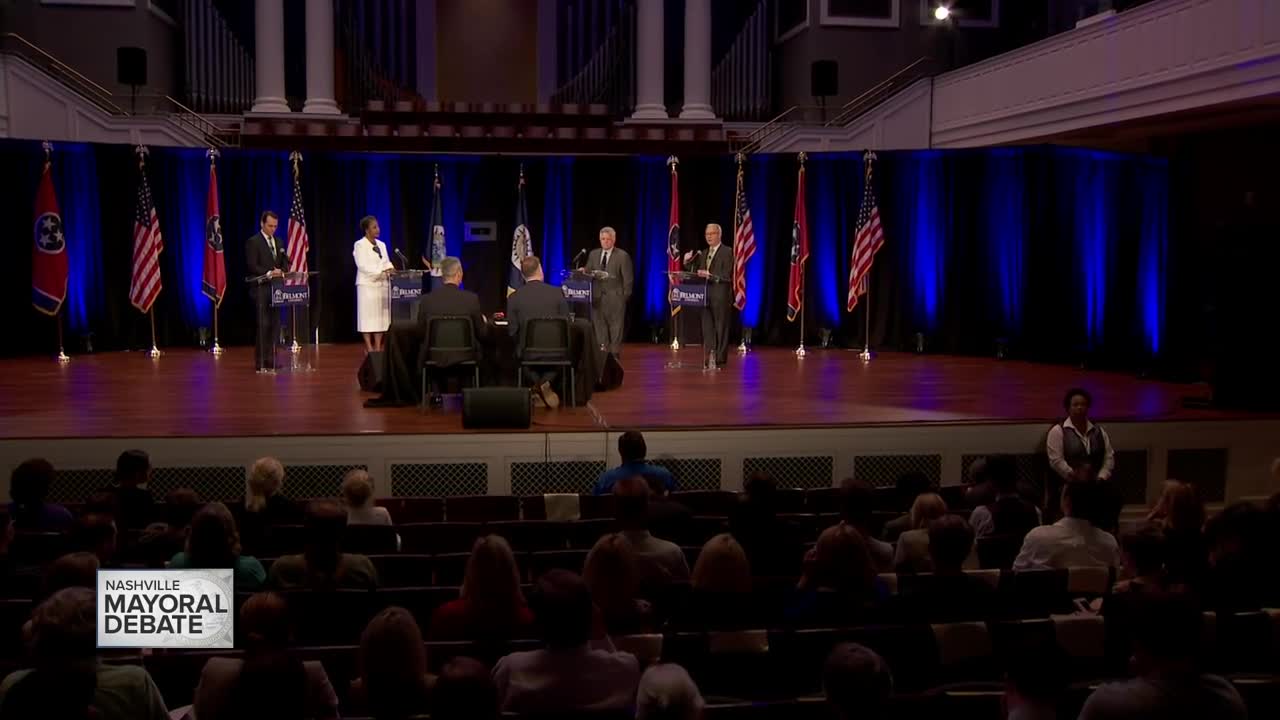 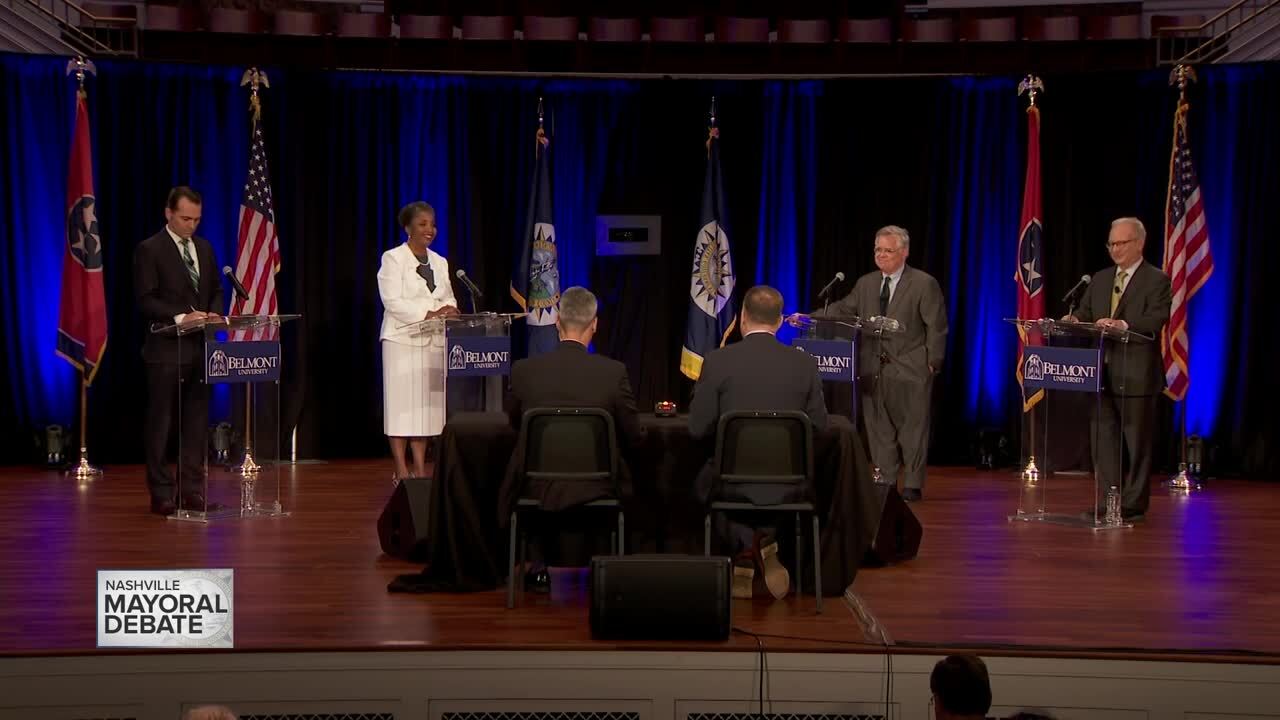 NASHVILLE, Tenn. (WTVF) — The top four candidates for Nashville mayor duked it out for the first time on television, addressing property taxes, corporate tax breaks, scooters and more, during a debate sponsored by NewsChannel 5, The Tennessean and Belmont University.

“To a great extent, it hurt metro employees,” Briley said, saying the spending plan would have increased their tax burden without increasing their pay.

Briley then took aim at what he called a lack of leadership from at-large Council member and mayoral candidate John Cooper, saying he should have presented his own alternate budget to the council last week.

“Your expertise surely would have given you an opportunity to present your own budget to the council,” Briley said. “I don’t know why you didn’t, but you didn’t.”

State Rep. John Ray Clemmons branded the spending plan as the Briley-Cooper budget, saying he would have supported a tax increase to fully fund schools.

Former Vanderbilt professor Carol Swain took swings at the establishment, including Mayor Briley, accusing him of being “tied to the old boys network”

With regard to the increased spending in Nashville, Swain said:

“We have leaders who cant say no.“ Swain continued: “They spend like drunken sailors.”

“There’s a moment when you need to wake up and realize they really aren’t necessary,” Cooper said. “That day is over.” He said tax breaks for companies should be focused on small business and local employers.

The candidates also addressed the turmoil in Metro Schools, including low morale among teachers.

“Schools need to spend more than half of its money on educator pay,” Cooper suggested.

But Briley fired back.

“I am making a demand on them that they change the way they do business, they need to be more responsible with their money,” Briley said.

The candidates also addressed the criticism Metro Police Chief Steve Anderson has received in his handling of two fatal shootings of African Americans, and whether they would keep Anderson as police chief.

“I don’t agree with 100 percent of what Chief Anderson has done, but I support him,” Briley said.

“I think we can do better,” said Carol Swain, saying he’s lost the respect of many police officers. “It’s time for a change.”

“No one is guaranteed a job in my administration,” Clemmons said.

“We are going to have a new era in our relationship between the community and the police,” Cooper said, stopping short of saying he would fire Anderson.

One of the most controversial topics among Nashville citizens was also on the table for the candidates: the use of e-scooters.

Swain said she agreed with Briley’s decision to ask Metro Council to ban the scooters until a safety framework can be put in place.

Cooper and Clemmons called for a larger-scale increase in infrastructure like protected bikeways.

Briley defended his push to ban the scooters, saying they often block the way for those in wheelchairs.

“People use our sidewalks for more than just going to a bar,” Briley said.