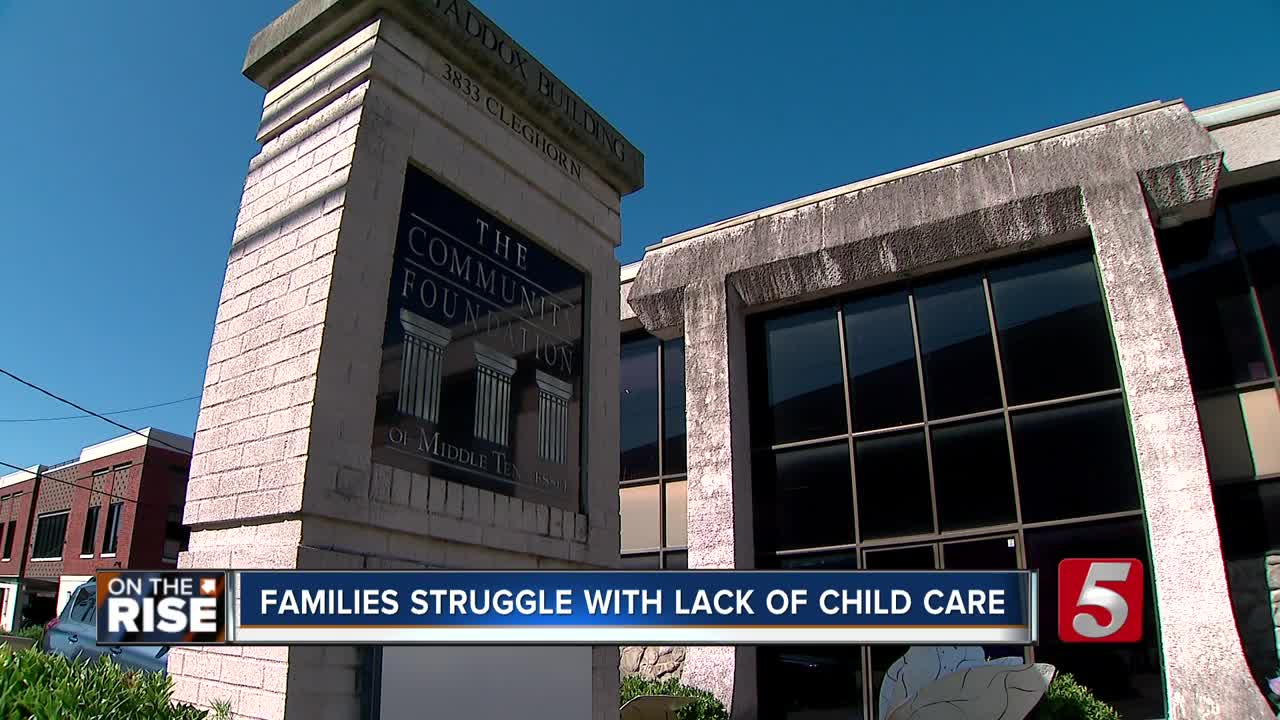 The need for child care is growing in Nashville as more families move in, but the lack of services continues to rise. NASHVILLE, Tenn. (WTVF) — The need for child care is growing in Nashville as more families move in, but the lack of services continues to rise.

Sue and Bill Munson of Leaps'n Bounds Preschool on Trinity Lane told NewsChannel 5 that they plan to expand their infant services, which has become the biggest need for any child care provider. Currently, the private business has one room that serves eight babies, but it hopes to readjust rooms and include eight more infants.

There are at least 50 on its infant care waiting list. Bill said in most cases, couples who do not have babies yet already sign up to be on the waiting list.

"We have a huge wait list for infant care, and that's where we see a lot of our phone calls coming from," Sue Munson said. "Not every child care facility has a space for an infant child, so we decided to restructure our rooms."

In reality, caring for infants is far from lucrative, and in many cases, creates a costlier burden. Sue stressed while strict state regulations help keep the kids safe, they are also making it harder for even the most well-known centers to shutter their doors. State ratios require one care worker for every four babies.

"The cost of paying a staff member, paying taxes, unemployment, and providing benefits outweighs the cost from those four children. We're a highly regulated industry and there's not a huge profit," Sue added.

To make matters worse, the average hourly wage for a child care educator is $10.49. Even though they enter the industry with the desire to help children succeed, the lack of payment makes it even harder to say.

There are about 2,300 child care agencies in Tennessee, but the number is considered by many community leaders and organizations as a shortage. Since 2000, Nashville's population grew 21 percent but the number of child care programs went down 16 percent, according to The Community Foundation of Middle Tennessee. The group also said within the last six years, more than 65 programs in Nashville closed, creating a loss of 3,360 openings that would have served children.

"There has been a huge evaporation of day care slots since the year 2000," The Community Foundation of Middle Tennessee President Ellen Lehman told NewsChannel 5.

Due to lack of availability, the average cost of child care including Nashville in Davidson County is $1,315, according to TCF. Overall, the annual cost of a child care provider is $8,524 for infants in Tennessee, which is higher than the annual cost to attend Middle Tennessee State University.

It can take anywhere between 14 months and two years to be on the waiting list in Nashville.

Lehman urged a change in the system and for agencies to adopt "shared services." By sharing certain services with other providers, it hopefully will help with finances. In the end, her goal is to have a bigger conversation on infants when it is the most crucial time to make an impression.

"As a community, we need to focus on that particular stretch of time for these children, our kids, to give them every advantage about how to understand and appreciate education," Lehman said.

Just this year, the Tennessee Department of Human Services announced major steps to help families with the cost of child care. In March, TDHS raised the weekly reimbursement rates for all providers who take part in the state’s Child Care Certificate Program. It was the first rate increase for child care providers since 2008.

In June, TDHS added a 15 percent bonus to child care payment subsidy rates in counties that are considered "distressed" or "child care deserts." Among the child care desert counties are Davidson, Sumner, Montgomery, Robertson and Shelby.

If you are looking for child care, one of the best places to start is ChildCareNashville.com.

To look find out if a child care agency has violations, click on this link and search for it in the county.