US sets record in daily COVID-19 cases with 188K, records 2K deaths in a day for 1st time since May 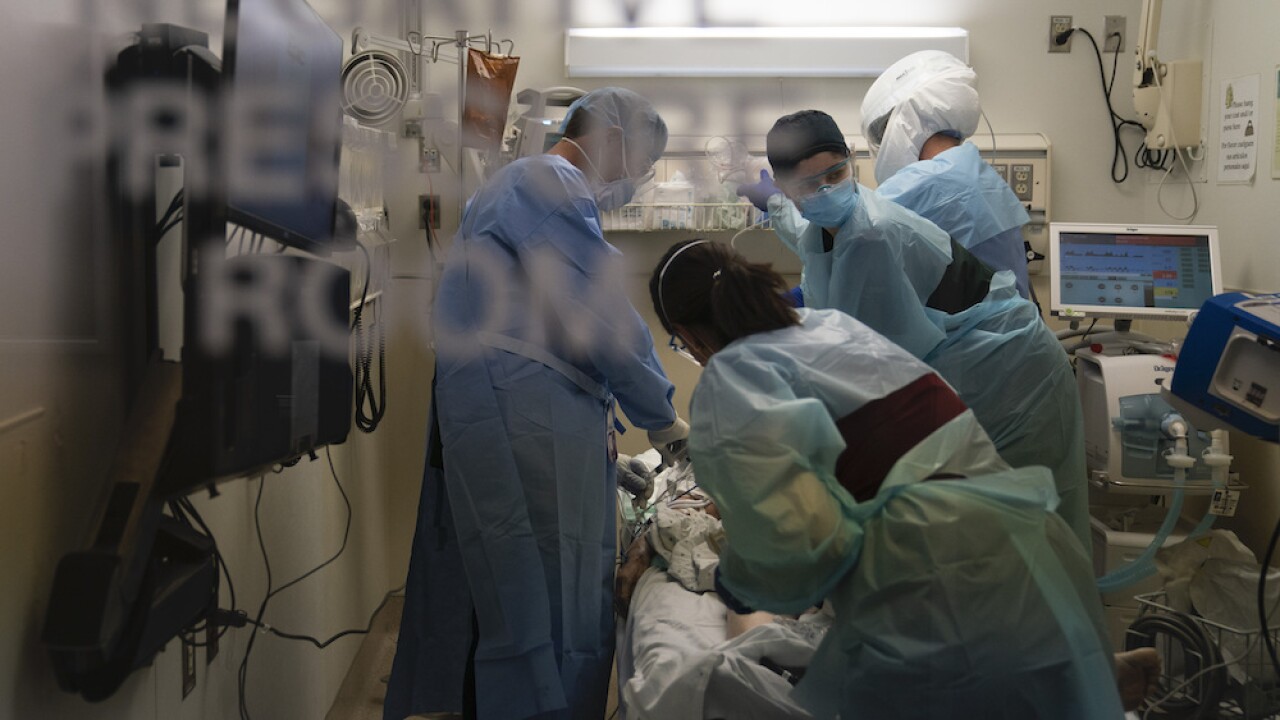 Copyright 2020 The Associated Press. All rights reserved.
Jae C. Hong/AP
EMT Giselle Dorgalli, second from right, looks at a monitor while performing chest compression on a patient who tested positive for coronavirus in the emergency room at Providence Holy Cross Medical Center in the Mission Hills section of Los Angeles, Thursday, Nov. 19, 2020. California is imposing an overnight curfew on most residents as the most populous state tries to head off a surge in coronavirus cases that it fears could tax its health care system, Gov. Gavin Newsom announced Thursday. (AP Photo/Jae C. Hong)

The U.S. reported yet another daily high mark for newly reported cases of COVID-19 on Thursday with nearly 188,000, according to a database kept by Johns Hopkins University.

Thursday marked the eighth time in November that the U.S. broke the daily record for newly reported cases as the COVID-19 continues to spread across the country. About 2.5 million people in the U.S. have contracted the virus since the start of November.

The spike in cases has led to all-time highs in hospitalizations linked to the virus. The COVID Tracking Project reports that more than 80,000 people are currently hospitalized with the virus across the country — an all-time record that surpasses even the early portions of the pandemic.

According to the COVID Tracking Project, 71% of those hospitalizations occur in the Midwest and South, leading to many rural hospitals running short on resources. Some states like South Dakota and Iowa say their hospitals are at their breaking points.

Thursday also saw reports of 2,000 deaths linked to the virus — the first time the U.S. has seen that many reported deaths in a single day since May 6. Since Oct. 17, daily deaths linked to COVID-19 on a seven-day rolling average have nearly doubled from about 700 a day to more than 1,300 a day.

The continued spike comes amid a rash of promising news in the hope for a COVID-19 vaccine. On Friday, Pfizer announced that it had filed for Emergency Use Authorization for its vaccine candidate, two days after initial studies showed it to be 95% effective in large-scale trials. Several other drugmakers have also reported that their vaccines are on the precipice of authorization.

However, health experts warn that the U.S. is in for a rough few months. Vaccines will initially need to be rationed for people in high-risk populations and health care workers. Dr. Anthony Fauci has said he believes vaccines won't be widely available until April.