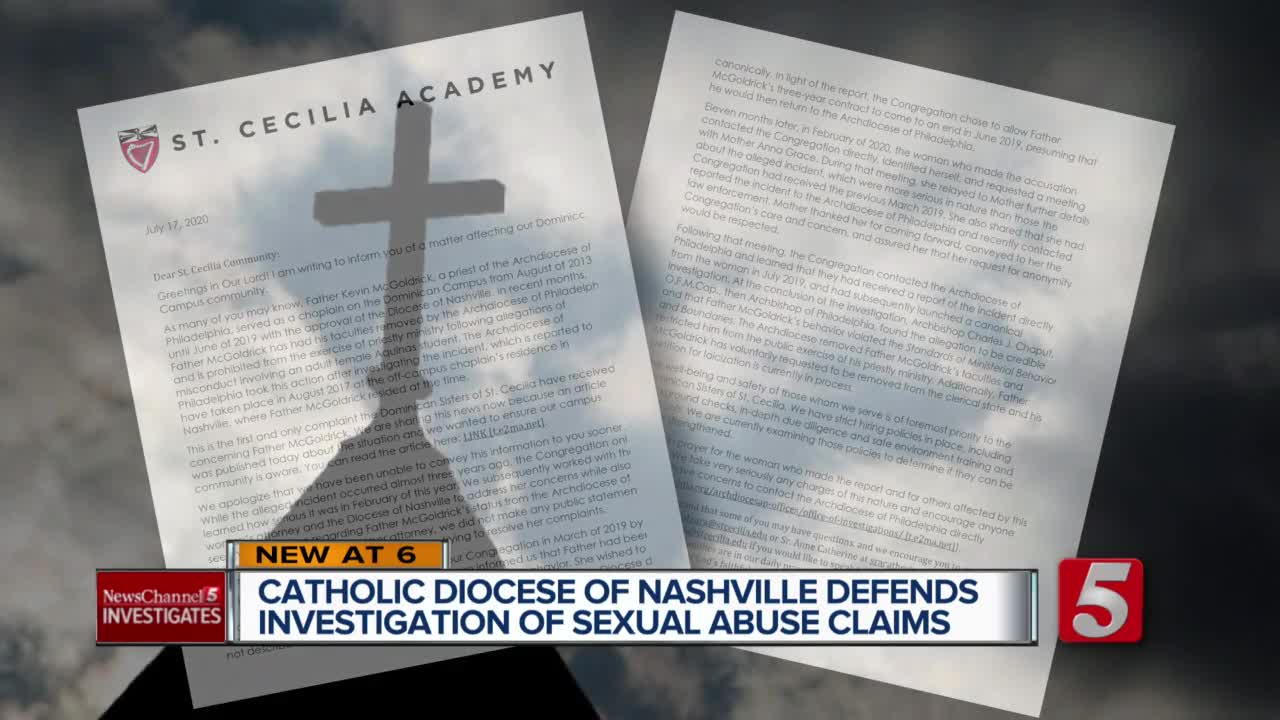 The Catholic Diocese of Nashville responds to an article in a Catholic newspaper claiming serious irregularities in the way it handled a victim's complaint of sexual abuse. 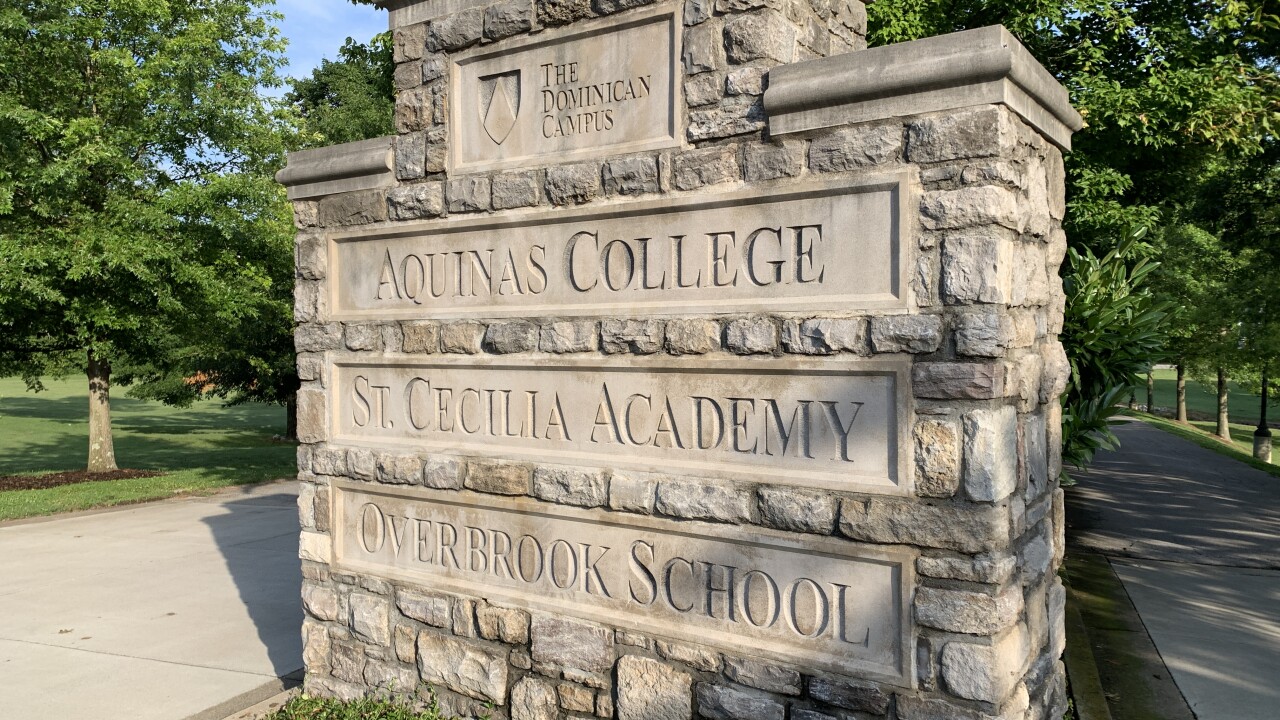 NASHVILLE, Tenn. (WTVF) — The Catholic Diocese of Nashville is defending how it handled a sexual abuse allegation against a priest who served as chaplain on the Dominican Campus in Nashville.

An adult female student at Aquinas College claims the priest sexually assaulted her in 2017.

On Friday, a Catholic newspaper questioned why the Nashville Diocese did not open a formal investigation after the victim came forward.

The article in the London-based Catholic Herald is titled "Adult Abuse Case: Accusations of Grave Mishandling Across Church Jurisdictions."

It focused on sexual abuse allegations against Father Kevin McGoldrick, who served as a priest on the Dominican Campus in Nashville from August of 2013 until June of 2019.

The allegations came from an adult female student at Aquinas College, which operates on the campus.

The article states that, in 2017, "Father McGoldrick got her drunk and sexually assaulted her while she was alone with him in his" residence.

According to the article, "she said she passed in and out of consciousness during the assault. 'Every time I woke up, I hoped I was in a nightmare, and the chaplain of my college wasn't on top of me,' she says in a first person account. 'I was wrong each time.'"

But in 2019, 18 months after it happened, she went to the Nashville Diocese.

She indicated that she was worried McGoldrick might do the same to other women or girls on campus.

But the Nashville Diocese did not open a formal investigation or report what happened to McGoldrick's home diocese, the Archdiocese of Philadelphia.

The communications director for the Nashville Diocese, Rick Musacchio, said the victim changed her story.

"The report that was made to us in March of 2019 was very different than the horrible story we read in the Catholic Herald," Musacchio said.

He said what she reported to the the Nashville Diocese involved late-night drinking in the priest's residence, but did not involve sexual touching.

"Her report did not rise to the level of an allegation of a crime either under civil or church law," Musacchio said.

NewsChannel 5 Investigates asked, " Do you have notes? Is there a report of what she brought to you?"

Musacchio responded, "She made a report to an official here at the Diocese. As a matter of practice we don't release those reports."

Musacchio said the Diocese would not release what the woman told them, but would cooperate with any outside investigators.

He said the diocese immediately contacted the Dominican Sisters that oversee Aquinas College and told them about the woman's compliant, but did not contact McGoldrick's home diocese in Philadelphia because what they were told did not rise to that level.

Catholic deacon Ron Deal has criticized the Nashville Diocese for its handling of clergy abuse cases in the past.

"The Church has no business investigating itself. I've said that time and time again," Deal said.

"We've now set up a classic 'he said, she said.' Okay, Diocese, prove to everyone's satisfaction that she has changed her story," Deal said.

The victim filed a police report in February of this year obtained by NewsChannel 5 Investigates.

She told investigators that McGoldrick "laid on top of her and touched her .... on top and beneath her clothing."

The report indicated the district attorney considered filing sexual battery charges, but the two-year statue of limitations had expired.

In May, the diocese paid the victim $65,000 to settle a potential lawsuit.

"As a matter of pastoral care and outreach to help her find healing rather than go through a legal process, we entered into settlement discussions," Musacchio said.

Musacchio said the diocese insisted that any settlement not include any kind of non-disclosure agreement.

The victim told the Catholic Herald she was frustrated that the Nashville Diocese did not do more to stop a priest in a position to sexually abuse others.

Musacchio said the diocese did what was appropriate with the information they had, and reported it to the Dominican Sisters of St Cecelia.

"What came to us was referred most appropriately to the people closest and best placed to investigate what was brought forth," Musacchio said.

St. Cecilia Academy responded in an e-mail to its community on Friday when the article in the Catholic Herald came out.

It said that February 2020 was the first time they heard how serious the allegations were against Father McGoldrick.

The email to the St. Cecilia community stated, "In February 2020, the woman who made the accusation contacted the "Congregation directly, identified herself, and requested a meeting.. During that meeting she relayed further details about the alleged incident which were more serious in nature than those the Congregation had received in the previous March 2019." (from the Nashville Diocese).

The Catholic Herald reported that the victim also went directly to McGoldrick's home diocese in Philadelphia and gave her account of what happened.

The Archdiocese of Philadelphia found the victim's compliant to be credible, and McGoldrick is now being allowed to voluntarily leave the priesthood.

St. Cecilia Academy said in its email that this was the first and only complaint it received against Father McGoldrick.

The Nashville Diocese said notes from the March 2019 meeting with the victim indicate she was encouraged to contact McGoldrick's home diocese in Philadelphia.

Here is a complete statement released by the Nashville Diocese:

In March 2019 the Diocese of Nashville received a report from an adult woman of inappropriate activity involving Kevin McGoldrick, a priest of the Archdiocese of Philadelphia recruited, hired and supervised by the Dominican Sisters of St. Cecilia to work as the chaplain at Aquinas College and the Dominican Campus.

The report by the adult woman who wished to remain anonymous of an incident that happened a year and a half earlier appeared to be neither a civil nor canonical crime. The report made to us was significantly different than the description of sexual assault subsequently reported to others and contained in published media reports.

The report was immediately referred to the Dominican Sisters of St. Cecilia who had employed and supervised Father McGoldrick for six years and who had the authority and purview to investigate and respond to this matter.

As a pontifical order, the Dominican Sisters are not under the control of the Bishop or Diocese of Nashville. The Bishop of Nashville provides an affirmation that theology taught at Aquinas College is faithful to Church teaching and assures that Masses and the sacraments are celebrated properly, but the sisters are solely responsible for the operation and supervision of the school and its employees.

McGoldrick was not incardinated in the Diocese of Nashville and was not acting as an agent of the Diocese or any of its constituent parishes, ministries, or bodies at the time of the Incident or the report.

The Diocese of Nashville had granted him faculties or permission to perform religious sacramental duties in the diocese after he was selected by the Dominican Sisters of St. Cecilia to serve on their campus. The permission to perform those religious sacramental duties was granted after he passed a criminal background check and presented a letter of good standing from the Archdiocese of Philadelphia which provides the Church’s canonical oversite of his ministry. These faculties were withdrawn after the Dominican Sisters elected not to continue McGoldrick’s employment.

The settlement proposed to the Diocese of Nashville by the person making the report initially included a confidentiality agreement, but in the interest of transparency, we insisted that any potential settlement avoid having a non-disclosure requirement. Out of pastoral concern, we are choosing to continue to honor her request for anonymity, although we are under no obligation to do so.

The parties acknowledged the settlement agreement was not to be construed as an admission of validity or the merits of any claim or allegation made by the person making the report. Any and all liability was specifically denied.