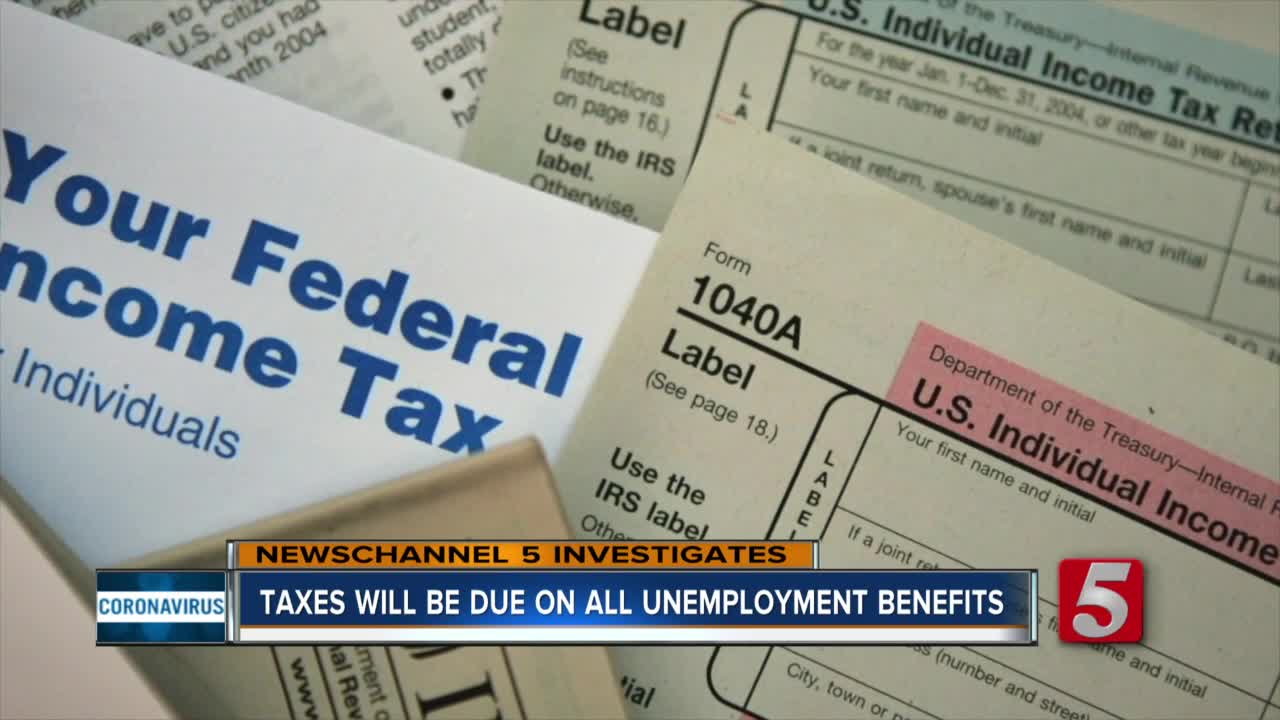 New unemployment recipients may not realize that benefits are considered income and are taxable and so is the extra $600 provided under the CARES Act. There are ways you can avoid ending up with a huge bill next April including asking the state to withhold money from your check to pay the taxes.

NASHVILLE, Tenn. (WTVF) — Since March, more than 700,000 Tennesseans have filed for unemployment, many of them for the first time. And if you're one of them, there's something you may not realize yet about that money you're receiving.

First, it was the deadly tornadoes. Then, the pandemic.

Together they left more than a fifth of Tennessee's workforce out of work and turning to unemployment benefits to help pay the bills.

Nashville resident Jim Holmes told NewsChannel 5 recently, "I know that there's people out there in my neighborhood that it is critical to them. It's a matter of them being able to put food on their table and keep a roof over their head."

But if you're one of the nearly quarter of a million people in Tennessee now getting unemployment benefits, you could be in for a big surprise on Tax Day next April. Turns out, your unemployment money is considered income meaning it's taxable and so is that an additional $600 you're getting through the CARES Act.

"How many people realize when they’re getting their unemployment checks, that they’re being taxed on it?" NewsChannel 5 Investigates asked Jason Sweatt, the Managing Tax Principal with the Crosslin group in Green Hills.

"It’s an interesting mix. And it is a case this year with COVID-19 that there are many people who are receiving unemployment checks for the first time in their life," Sweatt explained.

Sweatt and his firm deal with hundreds of taxpayers a year.

"There's no need to panic at this point in time. If they (unemployment recipients) waited until after the beginning of the year, there's not much that can be done so planning now is key," Sweatt said.

He added that you have several options.

If you are still receiving unemployment benefits, you can have the state withhold money from your check.

"A disadvantage of where we are in that cycle is that the $600 additional payments end soon and so the unemployment payments will go down which means there is less to withhold on," Sweatt explained.

Or, you can start paying some of what you owe now.

"They can make estimated payments at IRS.gov. On that website, there is a spot that says, 'To make a payment' and they can estimate how much tax they owe and make a payment directly from their bank account or from a credit card if they need to," Sweatt told NewsChannel 5 Investigates.

Sweatt also suggested trying to make up what you owe.

"When they start to work again they can increase their withholding on their wages from their job when they start working again to cover the taxes on the unemployment payments," he said.

If you do nothing now, you'll likely end up paying big next April 15.

And even though we're in July already, it's not too late.

"They've got another five or six months of the year left to be able to make tax payments through withholding from other places to make up for it and prevent penalties and interest when they file in 2021 for this year," Sweatt said.

When you file for unemployment, you are asked if you would like taxes taken out.

Even if you did not choose that option initially, you can change that at any time. Just contact the state Department of Labor and Workforce Development.