The 11-page report, prepared by the Nashville law firm of Bone McAllester Norton, also warns that a key Human Resources official hired by Joseph is viewed as "extremely divisive, dismissive and, in their belief, incompetent." It suggests Sharon Pertiller either be terminated, transferred or retrained.

"Based on our discussions with district stakeholders, it is evident that the morale of all employees, throughout MNPS, is very low,” the report concludes, adding: “We cannot over-emphasize the consistency of this concern among employees.”

In the report delivered to school board members Tuesday, the law firm says its investigation encountered “nearly unanimous expression of over-arching concern regarding lack of communication from the highest levels of administration.”

"If these issues regarding communication are not resolved, it will be difficult, if not impossible, for the district to retain qualified and exemplary employees,” they warn.

The report describes a meeting between Joseph and a group of principals who asked to meet with him to discuss hiring and communications issues.

Joseph demanded that the principals “turn off their cell phones and other electronic devices,” apparently so the meeting could not be recorded, the report says.

When they attempted to hand him a list of suggestions, Joseph “refused to accept the copy of the typewritten notes and asked that they all be destroyed at the end of the meeting" so they could not be disseminated.

"The stakeholders stated that this meeting was demoralizing and the Administration was dismissive to the stakeholders present, who have many years of experience in the system,” the report says.

“In fact, it was expressed that the morale amongst these principals was as low as they could ever remember."

The report singles out the district's executive director of human resources for talent strategy.

Stakeholders outside the Human Resources Department told the law firm that Sharon Pertiller is "extremely divisive, dismissive and, in their belief, incompetent."

"The employee's background is not in the education arena, and the employees training and communication with subordinates is ineffective," the report says.

"With such a consistent alarm about this individual, we believe MNPS would be remiss if it fails to address this matter.

"Reluctantly, and with consideration and due respect for this person, to cure the lack of morale, feeling of helplessness and lack of communication, we would recommend that Dr. Joseph either terminate this employee or send this employee for further training to ensure that the employee's communications skills and ability to work well with others improves."

Bone McAllester Norton was given a $100,000 contract back in October to review the district’s human resources operations following a sexual harassment scandal uncovered by NewsChannel 5 Investigates.

Pertiller's conduct has been questioned in several lawsuits filed against the district.

The report claims that “the Board of Education specifically requested this communication be sent as an attorney-client privileged document.”

There is no evidence that the board itself ever voted to make the report secret.

During Tuesday night’s school board meeting, chair Sharon Gentry warned her colleagues that the report could not be released without a vote of the full board.

In fact, other than the finding about Pertiller, the Bone report contains no new revelations about the sexual harassment cases still pending against Metro Schools. Tuesday night, the board voted to approve a $350,000 settlement with three victims of former principal Sam Braden.

It does conclude that “there is virtually no consistency in the way investigations are completed by individual investigators within MNPS.”

"During the course of our review, it was apparent that many of the people who were tasked with completing investigations had little or no formal training on how to conduct a thorough and professional investigation," the report adds.

It recommends standardizing forms and the way investigative files are maintained, as well as routine training in proper techniques for HR investigations.

Among the other key findings: 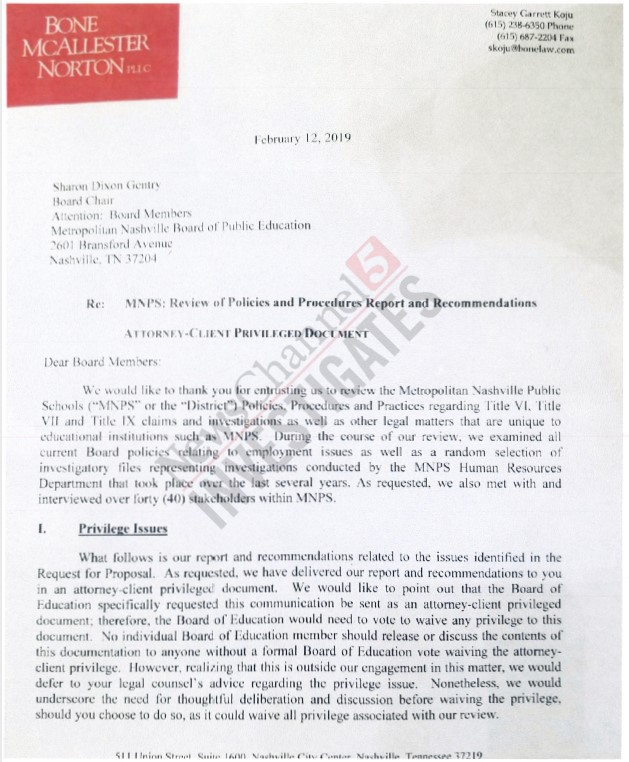