MNPS spent millions of dollars without looking for best price

Metro Nashville Public Schools awarded millions of dollars in no-bid contracts without ever checking to see if they could get better prices, an exclusive NewsChannel 5 investigation discovered.

NASHVILLE, Tenn. (WTVF) — Metro Nashville Public Schools awarded millions of dollars in no-bid contracts without ever checking to see if they could get better prices, an exclusive NewsChannel 5 investigation discovered.

In a written statement, MNPS officials insisted checking for lower prices was unnecessary since they were “piggybacking” on contracts that other agencies had put out for bids.

“That’s the purpose of a piggyback: Use the results of a contract that was competitively bid,” the statement said.

But a veteran state auditor said piggybacking should only be used after officials have determined that it’s actually a good price.

"We may be able to get a better price than that contract we are looking to piggyback on,” said Dennis Dycus, who retired from the Tennessee Comptroller’s Office where he headed the division that monitors local governments.

“So don't say automatically that piggybacking can always save you money, because it can't."

Joseph's team convinced the school board to give ESS a $1 million, no-bid contract.

That contract ballooned to $1.25 million before the school year was up -- when the district finally ended the deal. (View ESS contracts here.)

During a June 2018 meeting, school board member Jill Speering wanted an explanation.

"Why are we not offering them an extension or bringing it to the board to continue this?" Speering asked.

Human Resources Chief Deborah Story replied, "We don't have the money. We can't afford the 27% markup."

"That's quite the markup,” Speering responded.

Joseph's team argues that they did not need to see if any other company could offer a better price because they were piggybacking on a contract that had been put out for bids by Wilson County schools.

Dycus said he's not sure how piggybacking on a smaller system's contract could be justified.

"The savings is, as a rule, generated by volume and the smaller local government would not have the volume of purchases -- be it goods or services -- that a larger government would have to get the best price,” the retired auditor said.

"We piggyback off of a great deal of Metro contracts and off state contracts," Gossage said.

State law also says piggyback contracts “shall be made on the same terms and under the same rules and regulations” as the original contract.

Metro Schools said it changed the contract to reflect Nashville's higher salaries and, in fact, the markup is slightly lower.

“It has been our understanding that as long as we reasonably stay within the scope of the contract, we can alter the terms and conditions,” the district’s statement said.

“It's a different contract,” the retired auditor said. “If you change anything in that original contract, it's a separate contract -- and subject to bid."

After Joseph was first hired as the director of Nashville schools in July 2016, he also ordered his team to hire a company with whom he had done business before.

One of the services provided by Performance Matters is software that tracks professional development training that teachers are required to attend.

Joseph's team negotiated a new contract for the professional development platform based on a deal between Performance Matters and Shelby County.

“In a piggyback process, you can get best pricing -- and that's why you utilize it,” Joseph told the school board back in June 2018.

But NewsChannel 5 Investigates discovered that, in Florida, Polk County Schools bid it out and only had to pay $9.68 per user.

And Broward County got the best deal, at $7.75 cents per user. 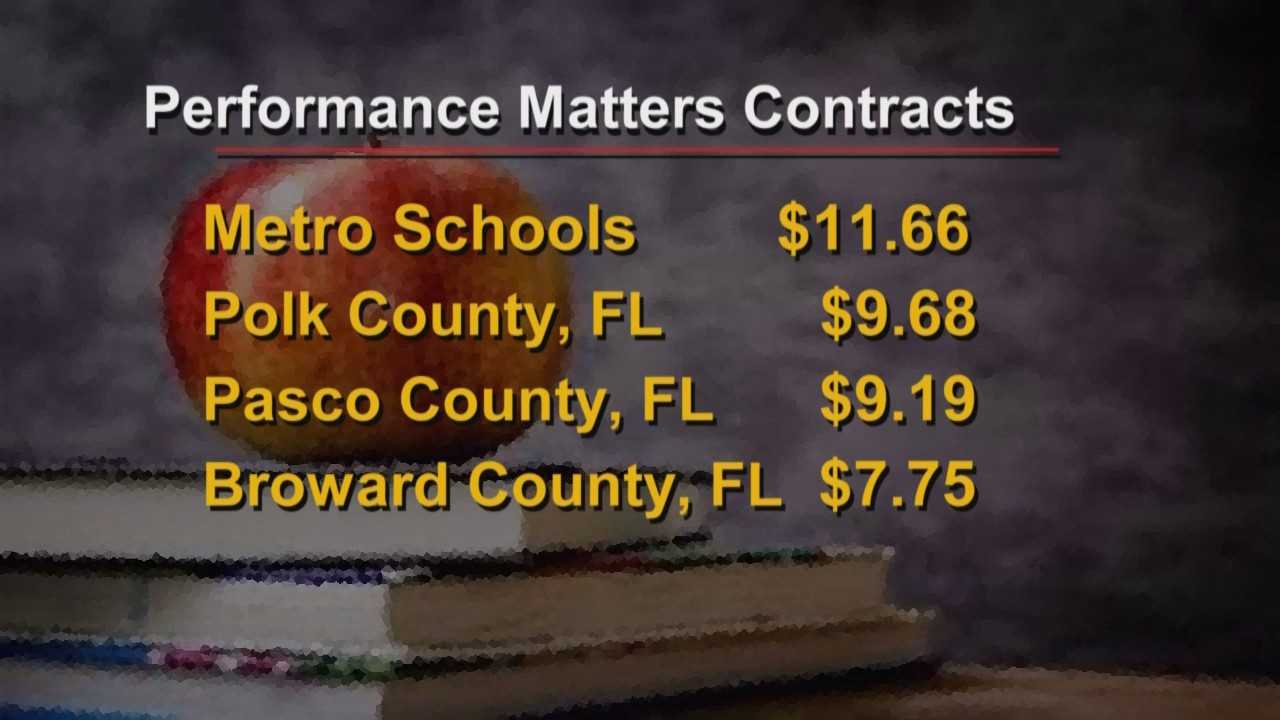 "There's a wide variety in prices, and I'm not certain we got the best price with this contract," said school board member Amy Frogge.

For months, Frogge has been raising concerns about the use of the piggyback process to avoid putting contracts out for bids.

Her concerns increased last year after one of Joseph's mentors, former Baltimore County Schools superintendent Dallas Dance, was caught accepting money from a vendor, then steering contracts to the company using the piggyback method.

"I have talked to other superintendents who've told me that they just won't piggyback contracts, particularly service contracts where there is not a set price, because of the risk of fraud and abuse,” Frogge told NewsChannel 5 Investigates.

Joseph has insisted that there has been no fraud nor abuse.

In the case of the ESS contracts, school officials finally admitted to the school board last summer that it had seen its costs under that contract spiraling out of control.

But five months later, the district gave the company a new no-bid contract, this one worth up to $2.5 million, to hire cafeteria assistants. On the school board agenda, the company was listed under a new name, ESS Southeast.

Again, officials claimed they were piggybacking on the Wilson County contract, which doesn't list terms for cafeteria assistants anywhere.

"You cannot amend that contract because when you amend the contract, it's a new contract and should be subject to bid," Dycus said.

In its written statement, Metro Schools seemingly admits it went outside the lines of the Wilson County contract itself:

“The Wilson County School District contract references their RFP. The RFP includes a chart of daily fees, but it does not define to what role those fees relate. They do identify crossing guards at the bottom, outside the chart. MNPS identified the daily fee for cafeteria assistants so that the ESS markup could be accounted for in our contract.”

Dycus said that, while piggybacking on a contract that's been awarded in the past can be completely legal, it's a mistake for a school system or anyone else to assume that the contract suggested by a vendor is really the best price that's available for taxpayers.

"When you bid out something, you are demonstrating that you get the best price that day. Not tomorrow. That day,” he explained.

"And it's incumbent - especially on local government officials - to determine that they are getting the best price that day."