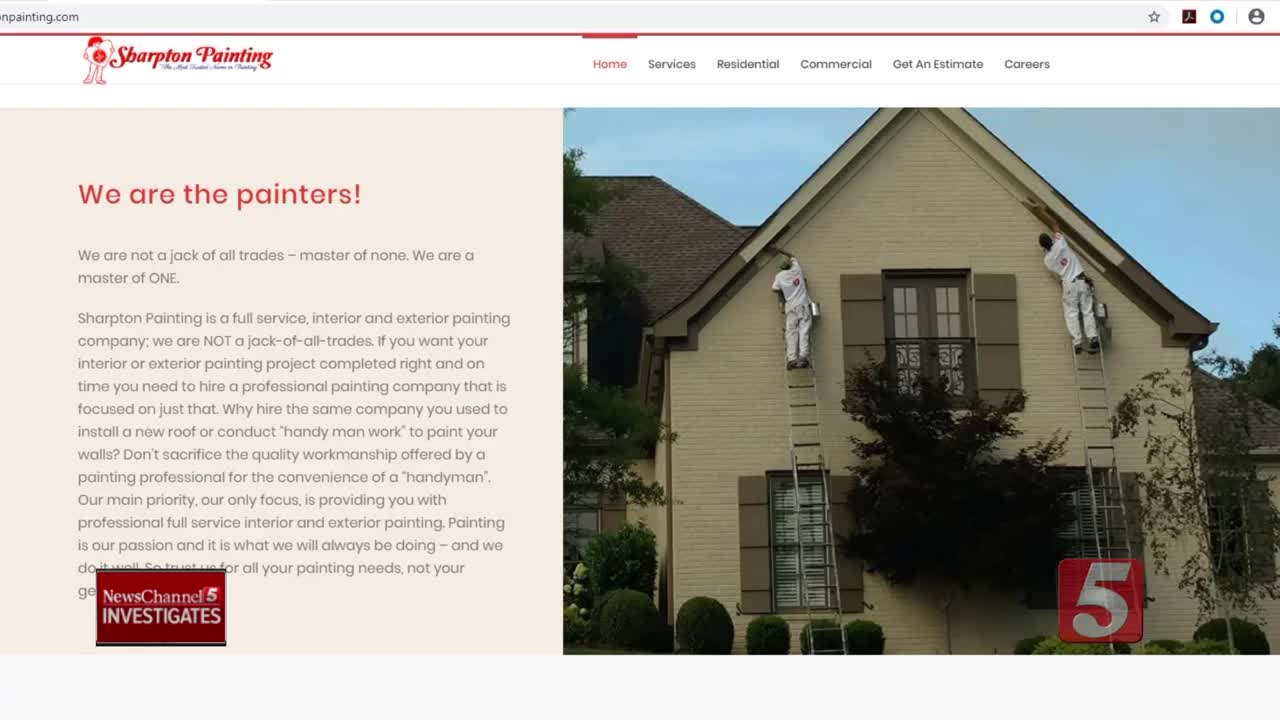 The owner of a Nashville area residential and commercial painting company has sued one of his competitors, accusing him of posting hundreds of fake negative reviews of his company on Google. This is not the first time the competitor has been accused of doing this. 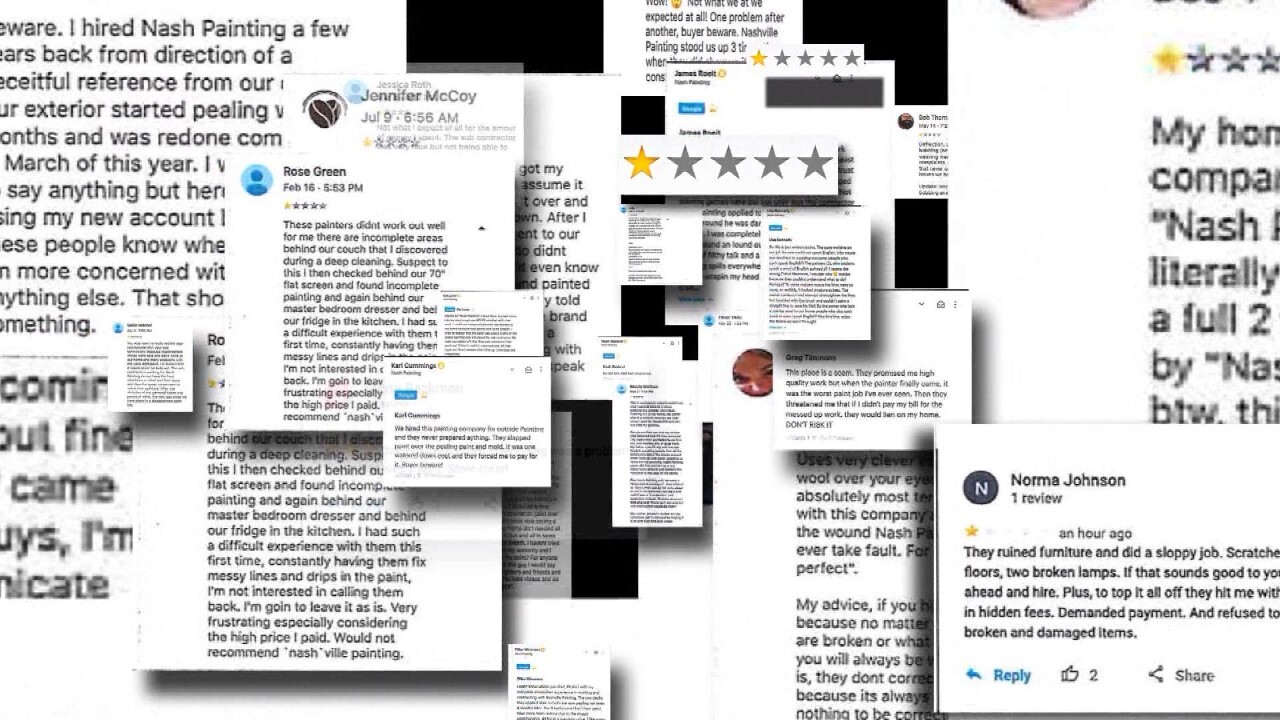 NASHVILLE, Tenn. (WTVF) — You've heard the warnings: Don't believe everything you read on the internet.

The owner of a Nashville area painting company says don't believe all of the negative reviews you see about his business online. He says his company and others have been the target of a competitor who has posted hundreds of fake reviews on Google - and he's found, it's been almost impossible to stop them.

For a small business owner like Bill Nishanian, Google reviews can make or break you. A lot of good reviews can send your company to the top of Google searches. But get many negative reviews, and your company all but disappears from Google, meaning potential customers will never find you. So, just imagine if you started getting bad reviews that were not even real.

"It was obviously a fake story, but it was a little bit over the top," Nishanian recalled.

He has owned the residential and commercial painting company Nash Painting for the last 11 years and remembers the first fake review Nash Painting got.

"I thought someone is intentionally trying to hurt our business with this review. And I couldn't think of anybody that would want to do this," he explained.

And then, they just kept coming.

All told, there were nearly 700 of them last year.

"All of these were fake reviews?" Newschannel 5 Investigates asked him.

Nishanian said he has thousands of happy customers and occasionally, he admitted, he'll have someone who just can't be satisfied. But all of these negative reviews just didn't make sense.

"The reviews would come in sometimes as many as 21 per day," he said.

It wasn't just a lot of one-star ratings. Most of them also included lengthy descriptions of specific problems and complaints about Nash Painting, its employees and even its owner.

"It was definitely a personal attack. It definitely got very personal," he stated.

Nishanian spent hours researching the fake reviews and the pictures. He found many of them had essentially been stolen from real people. For example, a review supposedly from Regina Cooks used a picture of Ann Cannon, a newspaper columnist in Salt Lake City.

"I found news reporters, famous people, adult websites in foreign countries," he said. "It's astounding the amount of time that was invested into this."

Nishanian's company is now suing one of its competitors, Kevin Sharpton and his company Sharpton Painting, accusing them of running a "vicious smear campaign" "for the express purpose of damaging, embarrassing and otherwise ruining Nash Painting."

Sharpton declined requests for an interview.

"Do I think [the lawsuit] going to be successful against my client? No," Sam Blink, Sharpton's attorney, told NewsChannel 5 Investigates. "Speaking with my client, he unequivocally has denied all of the allegations in the complaint against him."

The lawsuit includes a 220-page spreadsheet filled with the hundreds of negative reviews.

"You're saying he posted none of these?" NewsChannel 5 Investigates asked him.

"I do believe there may be two reviews that were posted by him. Outside of that, none," Blink replied.

So who posted the others?

The lawsuit also names Sharpton's longtime girlfriend, Katherine Amanda Lott. According to the lawsuit, she called Nishanian after she and Sharpton had broken up and "described...in detail...Sharpton's scheme...and how [he] was responsible for the fake negative reviews."

After she and Sharpton got back together, the lawsuit states, she sent an email maintaining "it was NOT Kevin," and that she actually had posted "many of the reviews" because she "was very angry at Kevin... and didn't know how else to get back at him."

Now, Sharpton's attorney maintains Lott is taking credit for essentially all of the negative posts.

"Yeah, she says that she is the sole actor in those reviews and my client knew nothing about it," Blink explained.

"So you realize we're now on the third version of her story?" NewsChannel 5 Investigates asked.

"I gather that," he replied.

A year ago, three other companies joined Nash Painting in hiring an attorney to send a cease and desist letter to Sharpton, accusing him of targeting all four of them with fake reviews on Google and other websites. One of the companies, House Painters, said their fake reviews started five years ago.

"Don't you agree that there appears to be a pattern of behavior here?" NewsChannel 5 Investigates asked Sharpton's attorney.

"No, no, I do not. I think there's several allegations that have been thrown out against my client without any evidence really to support it," Blink replied.

Another painting company, Sharper Impressions, sued Sharpton two years ago after it too had hundreds of fake negative reviews. In that case, court records show, Sharpton eventually admitted to what he'd done, apologized, and agreed to not post any more.

"My client learned his lesson from that case," Blink stated. "My client has assured me that's the last time he's ever left a review on another competitor's website."

While Bill Nishanian believes there are a lot of similarities between the negative reviews in that case and the ones against his company, he said the person posting the fake reviews against Nash Painting has been very careful to cover their tracks, and the lawsuit alleges, has used burner phones and even computer programs to hide where the posts are coming from.

Nishanian filed a lawsuit against "John Doe" hoping to identify the person responsible. After he subpoenaed records that would show where the reviews were coming from, the attorney for John Doe stepped in and tried to block it. At one point during negotiations, that attorney inadvertently cc'd Kevin Sharpton on an email.

NewsChannel 5 Investigates reached out to the attorney who confirmed Sharpton was his client.

While Sharpton's current attorney insisted that Sharpton is no longer posting negative reviews, NewsChannel 5 Investigates found Sharpton's own painting company has a lot of positive reviews posted by people who do not appear to even live in Tennessee.

"How do you explain that?," NewsChannel 5 Investigates asked attorney Blink.

"Well, I can't really explain that," he said after a long pause. "You know, people move."

Bill Nishanian told NewsChannel 5 Investigates that he's spent countless hours trying to get the fake reviews taken down, but Google does not make it easy. He has had to file separate complaints for each post and prove how each review violates Google's policies. He's been successful in getting many of them down and is still fighting to get the rest removed. Meanwhile, new fake reviews are still being posted almost daily.