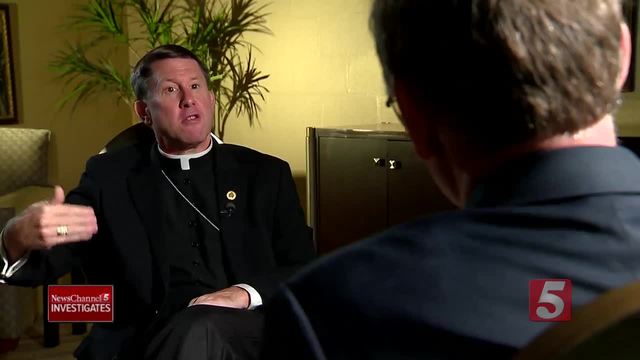 Critics inside and outside the Catholic Diocese of Nashville call for investigation of sex abuse by priests.

Critics inside and outside the Catholic Church in Nashville are calling for an independent investigation of the Diocese.

It comes after the Diocese released the names of 13 former priests who were credibly accused of sexually abusing minors.

None of the priests listed by the Diocese are currently practicing.

As NewsChannel 5 Investigates reported Friday, nine are dead, two are in jail and the other two were dismissed from the priesthood years ago.

But Deacon Ron Deal of the Holy Family Catholic Church in Brentwood questioned if the list released the by the Diocese is complete.

"The Diocese is not competent to investigate itself," Deal said.

Deal was among those who received an e-mail from Diocese early last month saying the Diocese planned to release the names of nine former priests "credibly accused" of abusing minors.

Then later that afternoon he received another e-mail saying the list was delayed.

On Friday the Diocese printed the names of 13 former priests who have been accused of abusing minors.

Deal questioned how the list of accused priests grew by four names in a matter of weeks.

"My question is why didn't you have those names on the first list? Please don't tell me it was a preliminary list because that's not what the e-mail to us said. It just said you are releasing it," Deal said.

The Diocese spokesman said it received additional information and feedback after the initial e-mail that led to the new names being added.

Bishop J. Mark Spalding said in an interview last week he was as confident as he could be that the list of priests was complete.

But late last week a group that tracks abuse by priests sent the Bishop a letter saying at least six other names should be included.

The Survivors Network of those Abused by Priests (SNAP) of Tennessee said it did not release the priests names publicly to protect their victims.

It said none of the additional priests is currently practicing.

Deal said the Diocese should turn over its files to the District Attorney or Attorney General and have a truly independent investigation of sexual abuse by priests.

"We need to get to the truth here. And I don't think it's for the Diocese to tell the rest of the faithful what the truth is in this instance," Deal said.

NewsChannel 5 Investigates asked, "Do you know of any other priests that should be included in this list?"

Deal responded, "Only by rumor, and I'm not going to give voice to that, because I have no direct evidence."

The Diocese said it encourages victims of abuse come forward and report abuse to the authorities.

It said it could add additional names to the list in the future.

But Deal said it should not just be up to the victims to come forward.

The Diocese has said it would allow the District Attorney or Attorney General to review whatever files they would like to see.

When asked if District Attorney Glenn Funk's office was investigating sexual abuse by former priests this was the response:

At this time, our office has not received any new referrals from the Metro Nashville Police Department regarding allegations of sexual assault by former priests.  Previous matters that were brought to the attention of our office were prosecuted and that former priest remains incarcerated for his crimes. If our office receives a referral related to these individuals, we will diligently pursue prosecution as we do in all allegations of sexual assault.