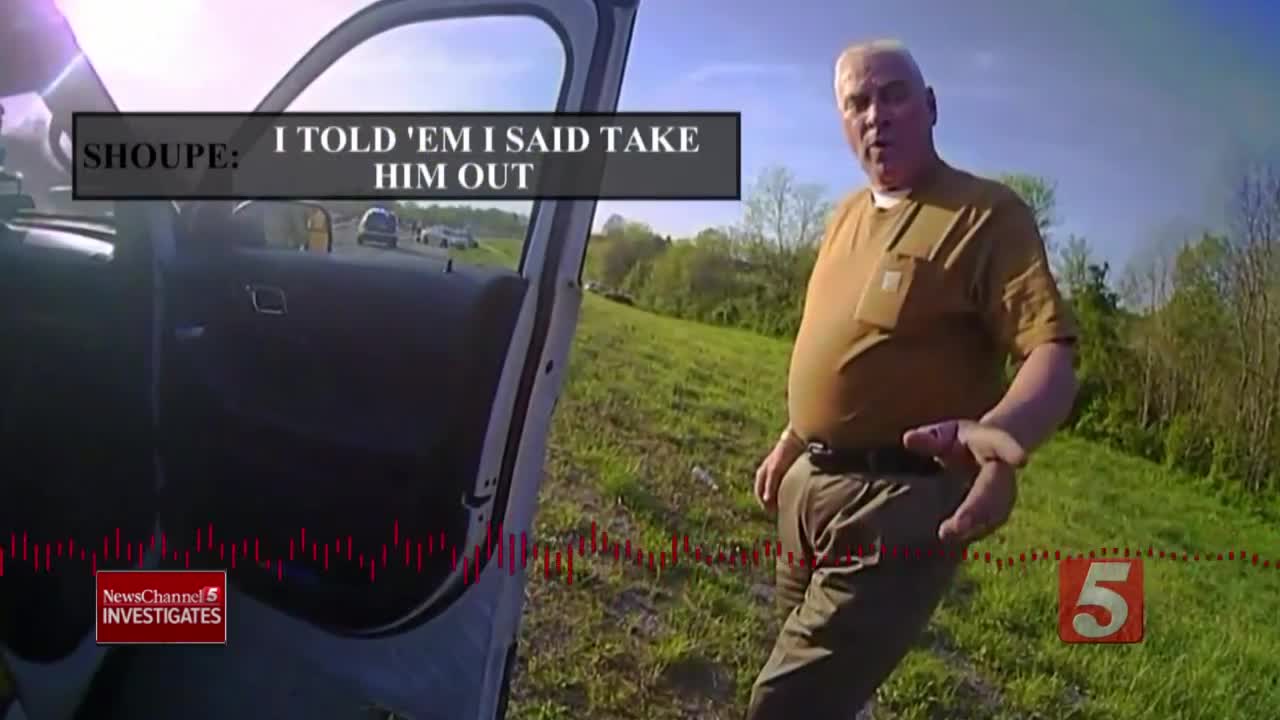 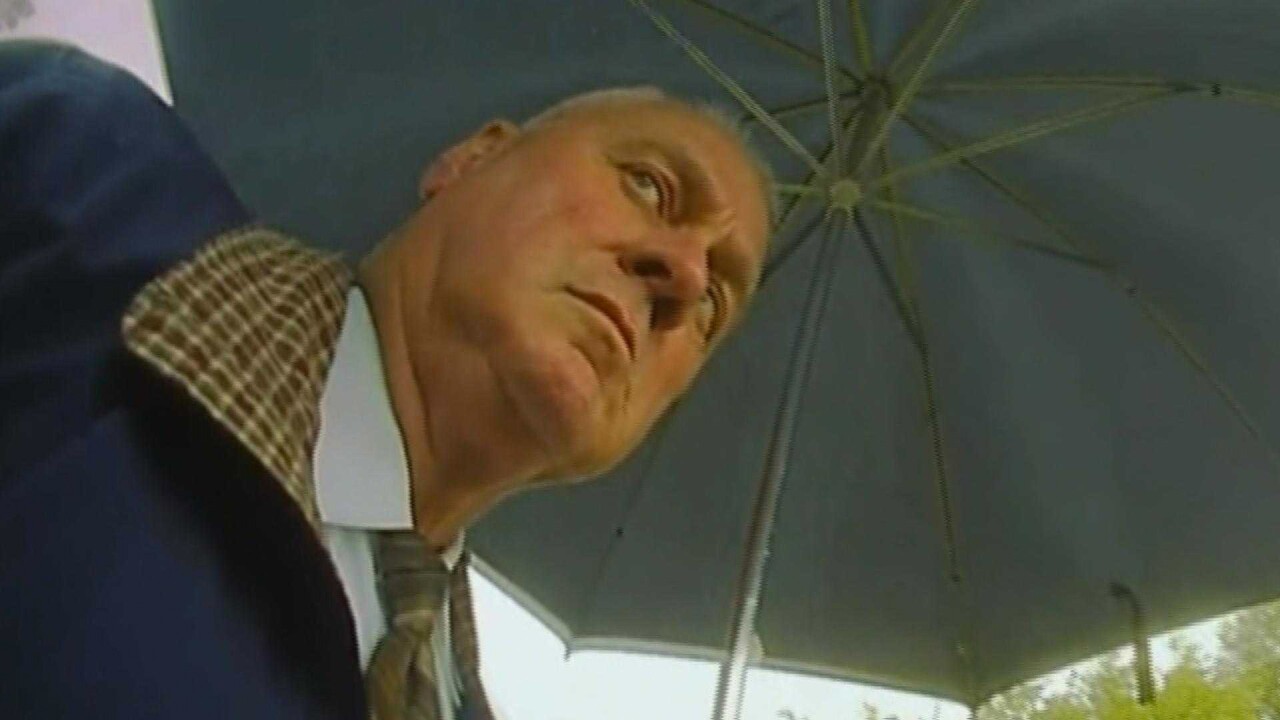 It is the second time a body camera has caught Shoupe making controversial comments, and both times it appears he did not realize the camera was still recording.

Shoupe left office in September after deciding not to seek re-election.

The county's current sheriff condemned Shoupe's comments after NewsChannel 5 Investigates brought the video to his attention.

"No commanding officer should ask another officer to jeopardize their credibility," Sheriff Steve Page stated.

After a pursuit on May 4, 2017, body and dash camera video shows officers surrounding the disabled car of Teddy Lee Dodd.

Dodd had refused to pull over earlier in the day when a deputy in neighboring Putnam County noticed he was driving without his headlights while it was raining.

Putnam County called off its pursuit of Dodd, but White County deputies began the chase again when a deputy noticed Dodd driving in the wrong direction on a road.

Dodd refused to pull over and forced the lockdown of a middle school as the chase went onto the school's property.

Dodd was finally caught after a trooper with the Tennessee Highway Patrol used a spike strip to flatten his tires.

As Dodd stood outside his car, the video shows him reach back inside his car.

White County Deputy Richard Lynch worried Dodd may have a gun and drove his SUV into Dodd's car, which likely broke Dodd's leg.

Minutes later, Oddie Shoupe arrived. He was White County's Sheriff at the time.

Among his first questions on that rainy day was whether deputies still had on their body cameras.

"You got your camera going?" Shoupe asked, looking at a deputy's body camera.

Shoupe then made a quick remark and appeared to gesture to the deputy to turn off his body camera.

But his camera kept recording as deputies explained what happened to the sheriff.

"That's when Lynch rammed the side of his car over there," a deputy said.

"With what?" Shoupe asked.

"His car," the deputy responded.

Shoupe then walked over and examined the vehicles involved.

Minutes later, he returned to the deputies and told them to completely change their story about what happened and say Dodd hit deputy Lynch.

"He hit Lynch," Shoupe said as he stared at the deputies and then walked away.

"Yes, sir," one of the deputies said and laughed after the sheriff left.

The deputies then immediately checked their body cams again.

"When I started, I hit mine," another said.

And if there was any question about what the Sheriff intended, he came over again after talking with the Highway Patrol.

"The THP is going to fill out an incident report. It's not a wreck report since there's no damage to the cars -- very little, minor -- since he hit the patrol car," Shoupe said as he stared at the deputies.

"From this video, the sheriff says 'he hit us' and that's not what happened," Andrews said.

Andrews said it was clear Shoupe was worried about damage to his patrol cars.

"Well, it was obvious he was concerned about his car because he said 'I told them not to use the patrol cars," Andrews said.

The pursuit of Dodd happened less than a month after White County deputies shot and killed Michael Dial.

Dial was unarmed, and at first deputies tried to ram him off the road.

But Shoupe gave the order over the radio for deputies to shoot Dial.

Afterward, he was caught on a body camera saying this to another deputy: "I told em, I said take him out."

"It wasn't long after that I heard 'shots fired,'" the deputy said.

Dial's family is suing White County and the former sheriff claiming Shoupe "preferred to shoot and kill Mr. Dial rather than risk damaging his patrol cars."

Andrews said it appears deputies did the right thing at the end of the Dodd chase by ramming the car.

They did not realize he was unarmed, but he could have been going for a gun.

"It was very clear the officers hit him, and I think appropriately so," Andrews said.

But Andrews, who is a past president of Tennessee Sheriff's Association, is disturbed Shoupe appeared to tell deputies to report it differently.

"It's so uncharacteristic and not representative of Tennessee sheriffs," Andrews said.

The incident report of the pursuit provided by White County shows a deputy reported it accurately despite what Shoupe said.

White County said only one report was written about the incident.

Deputy Nate Theiss wrote in his report "Lynch used his patrol car to shut Mr. Dodd's driver side door so he could not come back out with a weapon."

Theiss said in a statement provided by the sheriff's department, "I will never sacrifice my credibility or reputation to fit a narrative that is fundamentally false. I reported the incident accurately."

Andrews praised the deputy for not falsifying the report.

"The behavior of the individual in this video is not a suitable representation of this agency and its law enforcement officers. We have turned the page in White County, and I will not allow one sheriff’s behavior to remain our legacy. No commanding officer should ask another officer to jeopardize their credibility. Our community deserves better than this, and under my administration, this agency will be held to a higher standard. I did not doubt that Officer Theiss would not compromise his integrity to follow that direct order. He is an outstanding law enforcement officer and sets the example all officers should follow- which is always to do the right thing. I appreciate the opportunity to be interviewed about this incident, however; I would rather move forward than dwell on the errors of my predecessor."

Shoupe has moved out of White County, and we were unable to reach him.