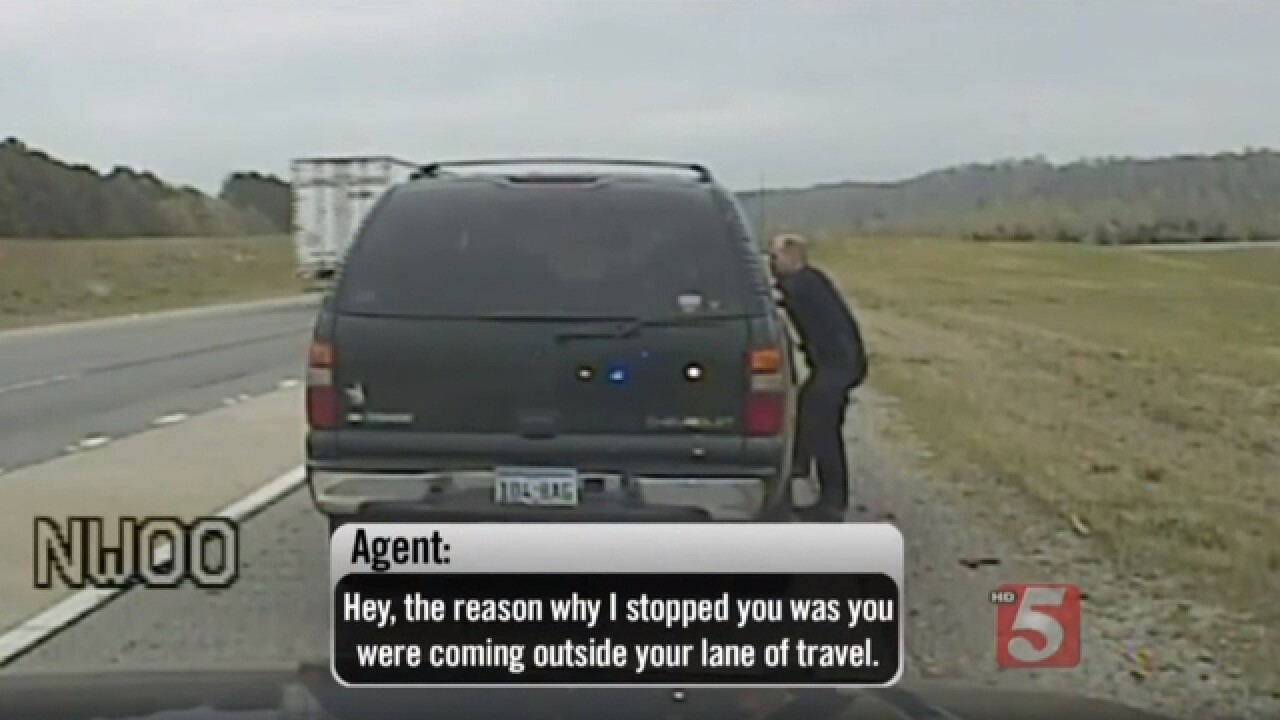 NASHVILLE, Tenn. -- NewsChannel 5's cameras caught a police stop in progress, and it is now at the center of an internal police investigation.

It's the result of a NewsChannel 5 investigation into interstate drug agents who stop lots of out-of-state drivers west of Nashville, looking for drugs or -- more often -- drug money.

Now, the head of one of those agencies tells NewsChannel 5 Investigates that he wants to make sure all of those stops are legal.

"It's got to a legitimate, lawful stop," said Dickson Police Chief Ricky Chandler.

Chandler chairs the board of the 23rd Judicial District Drug Task Force and serves on the board of the Dickson Interdiction and Criminal Enforcement (DICE) unit, both of which patrol a 50-mile stretch of Interstate 40 west of Nashville.

For a whole day, NewsChannel 5 Investigates went on patrol with DICE officers, seeing how traffic violations searches that they hope will yield drugs or, like in one case, a stash of more than $200,000 of suspected drug money.

A DICE officer told us that the traffic stop is key.

"We're not allowed to pull over anybody just for the sake of pulling them over," he said.

But NewsChannel 5 Investigates was also watching from Sky 5 and had questions about this stop where a supervisor from the 23rd pulled over two Hispanic men in an SUV with Texas plates.

His explanation was caught on his in-car video:

"Hey, the reason why I stopped you was you were coming outside your lane of travel. I don't know if you're getting sleepy or you're not drinking are you?"

Yet, our camera had been tracking that same supervisor and captured the exact moment that he put on his brakes -- just as he was about to pass the Texas vehicle. The video shows that the SUV was squarely between the lines.

For almost two minutes, the interdiction vehicle trailed the Texas SUV. While the officer himself was all over the road, it was another story for the two Hispanic men.

We showed the video to Chief Chandler.

"He never weaved once, did he?" we asked.

"No, he stayed within his lane of traffic."

NewsChannel 5 Investigates obtained other videos from that same 23rd Drug Task Force supervisor, where he stopped out-of-state drivers and never even told them that they violated any traffic laws.

Still, neither of the agencies operating in the Dickson area have their cameras set to record the traffic violations that make the stops legal.

"From their perspective, I don't know how it would benefit them to record that," said Nashville attorney Dominic Leonardo.

Leonardo said that a defense lawyer could use such video to fight a case. But, without it, it's the out-of-state driver's word against the word of a sworn police officer.

"If you have no other evidence there, then chances are the person who's hearing this case over the seizure of money or the criminal aspect if there [are] criminal charges brought, the police officer is going to win," he added.

Then, after the traffic stop comes the part where, if officers have suspicions about a driver, even if they don't really have a legal reason to search the vehicle, there's nothing to stop them from trying to persuade the person to let them search.

Take, for example, a stop observed from Sky 5 where an out-of-state driver was detained for more than 20 minutes while agents from the 23rd searched his car.

"This is a very fine line between a good stop where there may be a bust to it -- or basically a legit guy and a complaint," that same supervisor told a fellow officer.

He suggested that they use the driver's claim that he has worked with police as an interpreter.

"Play it off like he's one of us. Hey, if you could do us a favor, if I get another search out of the way, I get to go to lunch."

NewsChannel 5 Investigates asked Chandler if it is "OK to trick people into consenting to searches."

"Power of persuasion and tricking are two different things," the chief answered, "and I think you've got to be able to be persuasive to get searches if you've got hunches."

In another case, the supervisor bluffed the passenger in a car.

"Would there be any reason why we might have received a phone call and been told that this vehicle was transporting a large amount of cash?" he asked.

In fact, it was a lie -- and the search found nothing.

We noted to Chandler that the two agencies are "pulling lots of people off the interstate," applying the same techniques. "Is there any part of that that bothers you?"

As for the questionable traffic stop caught by Sky 5, "Rest assured, if I can get a copy of this tape it will be looked into.... That doesn't look good at all."

NewsChannel 5 provided Chandler with a copy of the video and posted it online here. (At one point, the Texas SUV moves out of the frame -- except for the left mirror which can be seen tracking the dotted, white line.)