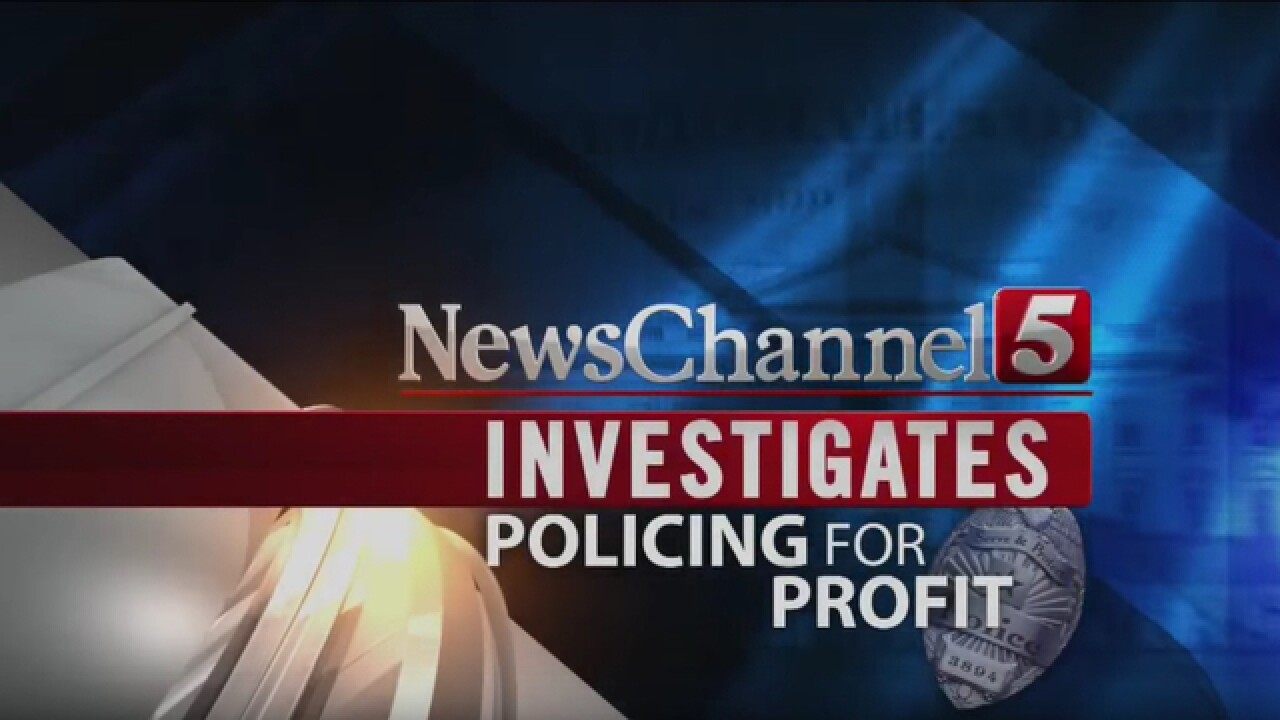 A four-year NewsChannel 5 investigation exposed practices that have allowed some Tennessee police to take cash from out-of-state drivers without charging them with a crime. Those revelations helped fuel a national conversation about civil forfeiture laws that make such practices legal.

A major NewsChannel 5 investigation has uncovered serious questions about Tennessee's war on drugs. Among them: are some police agencies more concerned about making money off the drugs, than stopping them?

New video obtained by NewsChannel 5 Investigates shows an interstate interdiction officer offering to trade the freedom of two truckers -- for their cash. Is it good police work -- or policing for profit?

NewsChannel 5's cameras caught a police stop in progress, and it is now at the center of an internal police investigation into how interstate drug agents stop out-of-state drivers.

Chief Requests Outside Review Of Stops By Drug Officer

Dickson Police Chief Rick Chandler is asking the DA to bring in an outside agency to review traffic stops by a local drug task force officer. It follows an exclusive NewsChannel 5 investigation.

Imagine being stopped on the interstate and put into handcuffs because police think you're carrying too much cash -- even worse, having your money taken. Meet the innocent victims.

A federal judge has questioned whether one of Tennessee's top drug agents made up a reason to stop two Hispanic men on the interstate. It follows questions raised by NewsChannel 5 Investigates.

What Happened To Investigation Promised By Police?

There are even more questions about whether anyone's looking out for the rights of innocent drivers west of Nashville. Authorities promised a full investigation of one of their own, but it never happened.

'Policing For Profit' Leads To Two Bills In Legislature

State lawmakers are promising a full investigation of whether some Tennessee law enforcement agencies are policing for profit.

"If somebody told me this happened to them, I absolutely would not believe this could happen in America." That was the reaction of a New Jersey man whose case was taken in Tennessee.

NewsChannel 5's continuing "Policing for Profit" investigation has uncovered new questions about how government equipment ended up on land owned by the local police chief.

How did a Middle Tennessee police department get a bulldozer that ended up on the police chief's land? That's the question that some folks in Putnam County are asking.

A witness, tracked down by NewsChannel 5 Investigates, is raising serious questions about the story told by a local police chief who is now facing a criminal investigation.

A CBS spokesperson has confirmed that Sunday's night episode of The Good Wife was partly based on NewsChannel 5's "Policing for Profit" investigation.

Unlikely Allies Call For End To 'Policing For Profit'

Two different interest groups, from two totally different perspectives, are now calling for an end to laws that make "policing for profit" legal in Tennessee.

A Putnam County grand jury has refused to indict a Middle Tennessee police chief on charges that he misused government equipment. But the DA says the case is not over.

Monterey Police Chief Kevin Phillips will face a hearing next week to decide whether he should be fired. That follows a NewsChannel 5 investigation.

Tennessee lawmakers are prepared to consider a major overhaul of laws that allow police to take cash off of drivers to fund their agencies.

Monterey Police Chief Kevin Phillips resigned Monday just hours before a vote by the town's civil service board over whether he should be fired.

A conservative-leaning group issued a new report Monday calling upon Tennessee lawmakers to take police out of the business of making money for their agencies.

DAs Agree To Work Toward 'Policing For Profit' Compromise

For the first time, Tennessee's district attorneys have signaled they are willing to work on reforms to protect innocent people who have their cash confiscated by police.

A compromise, designed to protect innocent people who have their cash taken by police, sailed through a House subcommittee Tuesday afternoon.

A major reform -- designed to protect the rights of innocent people who have their cash taken by police -- is on its way to becoming law.

NewsChannel 5 has uncovered a brand new "policing for profit" case -- a case that resulted in a New York man losing a $160,000 on a Tennessee interstate.

Have Tennessee drug task forces lost their way? That's the question lawmakers will be asking Wednesday as a Senate committee tackles a hot-button issue.

While there's absolutely no evidence that the terrorism claim is true, the task force director ended up inadvertently conceding that interstate interdiction units do indeed have a profit motive.

A NewsChannel 5 investigation has led to the guilty plea of a former Monterey police chief. Kevin Phillips pleaded guilty Thursday to official misconduct.

A traffic stop along Interstate 40 is raising new questions about your constitutional rights. Among the questions: what happens to your right to say "no" to a search when police are looking for cash?

An exclusive NewsChannel 5 investigation has uncovered serious questions about the drug dogs that police use to justify searches along Tennessee's interstates.

An agency at the center of NewsChannel 5's "Policing for Profit" investigation has severely restricted the use of civil forfeiture laws that had been used to seize cash from drivers passing through Tennessee.

The policing-for-profit controversy has two unlikely groups teaming up again to push new reforms in the state legislature. It follows a four-year NewsChannel 5 investigation.

Federal drug officials are cautioning highway interdiction teams to remember that they are out on the roads to bust criminals and not to make money for their agencies.

NewsChannel 5 Investigates looked back at its four-year “Policing for Profit” investigation in a one-hour, prime-time special that aired Saturday, Dec. 27.

Tennessee police would no longer be able to take cash or property from drivers without charging them with a crime, according to legislation being drafted by lawmakers.

Should cops be able to take your money without charging you with a crime? A bill to overhaul Tennessee's civil forfeiture laws ran into a police roadblock in the legislature.

DA To Senators: 'Criminals Will Thank You' For Forfeiture Reforms

Don't take away our ability to make money! That was the message that Tennessee law enforcement delivered to a Tennessee legislative committee.