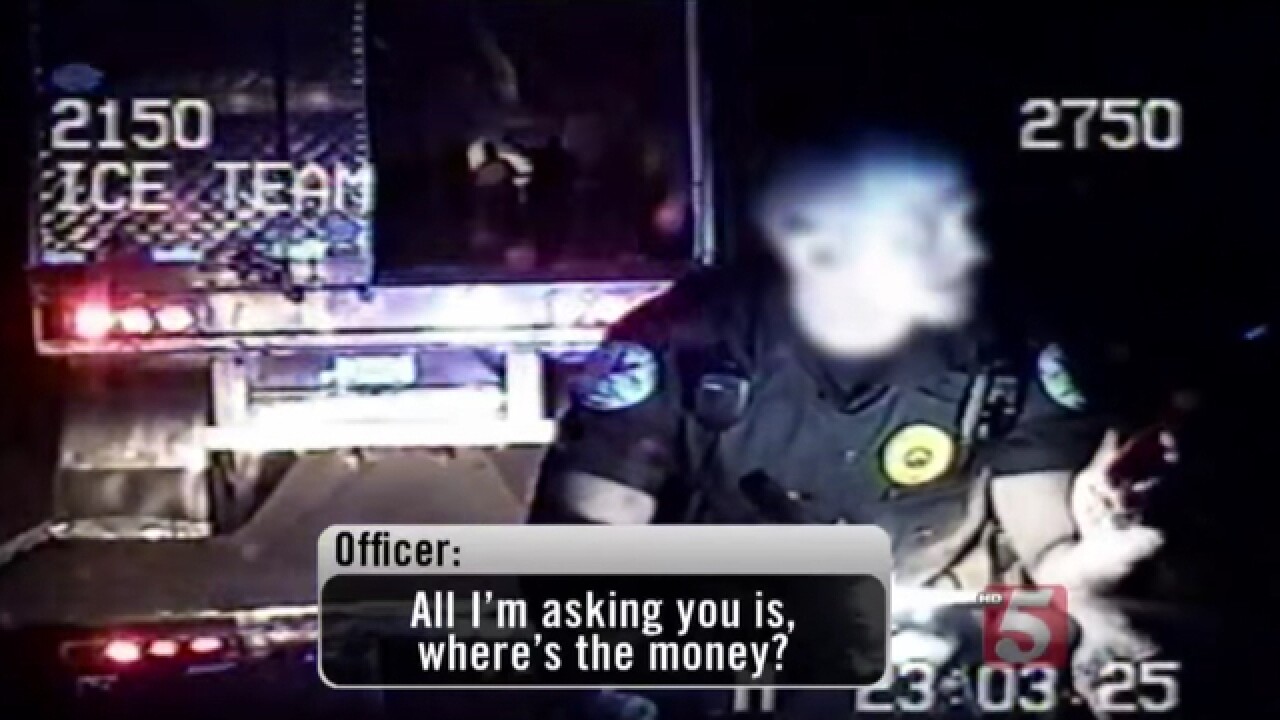 But critics say it's a prime example of how the rules have been twisted by laws that let agencies keep the money they seize.

The video -- obtained under the Tennessee Public Records Act -- shows a May 2010 traffic stop in rural Hickman County, on a darkened stretch of westbound Interstate 40.

There, two California truckers were given a tough choice: potentially face a criminal prosecution or hand over the cash that the interdiction officer suspects is hidden somewhere in their tractor trailer.

"You're going to have to trust me, or you're going to out on a limb and see what happens once we find it," the officer told the truckers.

Before the night was up, agents recovered piles of suspected drug money -- almost a half a million dollars -- money that their agency, the 21st Judicial District Drug Task Force, will get to keep.

"I will do everything I can to take that money out of the hands of those drug dealers and the cartel," District Attorney General Kim Helper told NewsChannel 5 Investigates.

But Helper said the two truckers -- who she believes were drug couriers -- got to walk without even being asked to name their accomplices because she believes they had not really committed a crime that she could prosecute.

"The transportation of illegal drug proceeds through the state of Tennessee from my reading of the statute is not a crime," Helper insisted.

The incident began as a routine traffic stop, except in this case agents are specifically looking for drug money heading back to Mexico.

Officer: "You say you're not traveling with anything illegal in your truck, right? No drugs? And you're not traveling with any large amounts of U.S. currency?"
Trucker: "No, sir. No, sir. No, sir."
Officer: "You wouldn't have a problem if I searched your truck or your trailer for any of the items mentioned?"
Driver: "Not at all."

As the time passed, suspicions were aroused by discrepancies in the truckers' stories, but officers were not finding anything up in the refrigerated trailer, known as a reefer.

So the agent began threatening the truckers with criminal prosecution.

Officer: "Money laundering is what it's called, and it's a federal offense. The good thing for you is when we seize money we don't deal with the feds. We seize it ourselves.  And if it ain't your money and you say 'Agent Owens, it ain't my money, I don't know how it got there...'"

NewsChannel 5 Investigates asked the DA if the officer was not suggesting to the truck driver that his defense would be that he did not know how the money got there.

"I don't think he is," she answered, "because I think he recognizes at this point that the transport of money just through the state is not a crime under our money laundering statute."

Yet, these are some of the statements that the officer made:

Officer: "Here's the thing, alright. Don't talk to him, just listen. Just listen. Do you want to go home?"
Trucker: "I sure do."
Officer: "Does it not make sense that I'm trying to help you... because you honestly can't think for a second that we ain't going to stay here until we find it."

NewsChannel 5 Investigates told Helper that the officer "sure is making this guy think he's committed a crime."

"Well, as I indicated to you," she responded, "law enforcement agents use various means of questioning to get as much information as they can."

But if someone has not committed a crime, is it proper for a police officer to make that person think that they have?

"I believe," Helper said, "that officers can use a variety of techniques."

The officer also assured the driver, that if they would cough up the cash, they would not be asked to rat out their accomplices.

Officer: "I don't even care where you got it. I want the product. That's what I'm after."

NewsChannel 5 Investigates said to the DA that "throughout this incident the officers tell him you do not have to tell us where you got this money."

Is that police work?

"Police work," Helper said, "to the extent that these officers, from my perspective,  are trying to work with these guys who are merely the couriers."

Still, we pressed, "At no point does any officer ever ask, 'What's the name of the big fish in this case?'"

"Right, right," the DA acknowledged. "And I agree with you. Should they have asked it? Maybe."

Finally, an hour into the traffic stop, the driver came clean.

A short time later, the task force would be half a million dollars richer.

Still, the DA admitted that she isn't completely happy with the outcome.

"I would love to see our legislature make a change so that we can make those arrests on the sides of the roads with these guys."

We also found cases in the Dickson area where subjects admitted that the money was from drugs. Not only were they released, but we're told that the video evidence of those stops was later destroyed.

Still, a Nashville prosecutor, who was involved in drafting the state's money laundering statute, tells NewsChannel 5 Investigates that he thinks the law could be used to bring criminal charges against some people running money for the drug cartels.

Helper says she'll now ask lawmakers to clarify the law -- something that apparently no DA had bothered to do before our investigation.