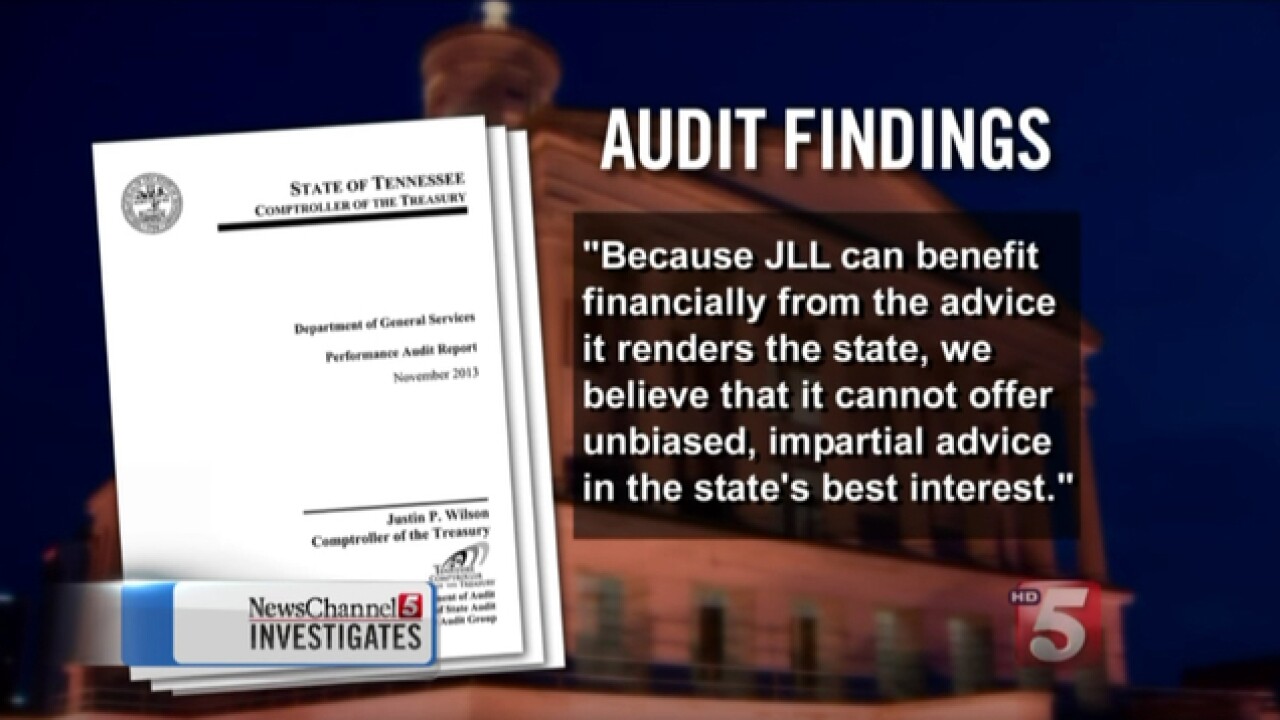 It confirms the findings of an exclusive NewsChannel 5 investigation.

The audit concludes that administration paid a big corporation for advice that, in some cases, gave the corporation more ways to pocket taxpayers' money.

When the Haslam administration outsourced management of the state buildings, the winning bidder was a big Chicago-based corporation, Jones Lang Lasalle. It's a company that candidate Bill Haslam had once counted among his personal investments.

But after JLL produced a $1 million study of the state's real estate needs, NewsChannel 5 Investigates discovered that it began getting even more work through a series of no-bid contract amendments.

While JLL was recommending that the state get rid of buildings like the historic Cordell Hull, the Haslam administration let it charge commissions when the state had to turn around and lease new buildings.

"That is a potential conflict of interest," said state Comptroller Justin Wilson, whose staff produced the audit of the Department of General Services.

The audit concludes that JLL had an "unfair advantage" when it came to those contract amendments.

"Because JLL can benefit financially from the advice it renders the state, we believe that it cannot offer unbiased, impartial advice in the state's best interest," the audit report reads.

The comptroller said he believes the real problem was that the Haslam administration got into too big of a rush to award the contracts.

In fact, the administration has frequently noted that the State Building Commission -- which includes Wilson -- had approved those contracts.

Yet, our investigation discovered that even Wilson had questioned the lease commissions, writing "A commission to JLL at first blush seems very wrong."

State Rep. Mark Pody, who sits on the legislature's Fiscal Review Committee, said lawmakers need to make sure that a potential conflict of interest doesn't cloud an otherwise good idea.

"We shouldn't just have one company do everything, do the looking at it, making the recommendations and they're the only company that can come fix it," the Lebanon Republican said. "It should be spread out through all the companies as well."

The audit also concluded that the state should take steps to minimize that conflict-of-interest and even, as some of our first reports suggested, consider following federal ethics guidelines that try to make sure that consultants are never put into a position to profit from their own recommendations.

Still, both the Department of General Services and JLL continue to deny that there is a conflict. They say state employees make the final decisions on JLL's recommendations.

"Jones Lang LaSalle, in full coordination with the Department of General Services, is executing the State of Tennessee's innovative real estate program that is saving taxpayers tens of millions of dollars by decreasing expenses, reducing underutilized office space and updating office standards to improve productivity.

"All of these services are provided based on terms developed by the Department of General Services and in compliance with applicable laws, policies and real estate industry practices.

"JLL agrees with the DGS response to the Comptroller's Audit, which states, (on page 35): ‘Because of the nature of the approval process, with each lease being fully vetted in public meetings, any risk of a misuse of taxpayer dollars as a result of a perceived "organizational conflict of interest" was eliminated.'

"All recommendations JLL makes to the state are made exclusively in support of effecting the state's goals for real estate services. The state provides criteria for our evaluations, and then either accepts, rejects or modifies our recommendations in its complete discretion."

Department of General Services officials had previously argued that they hired JLL because it had expertise that state employees did not have.