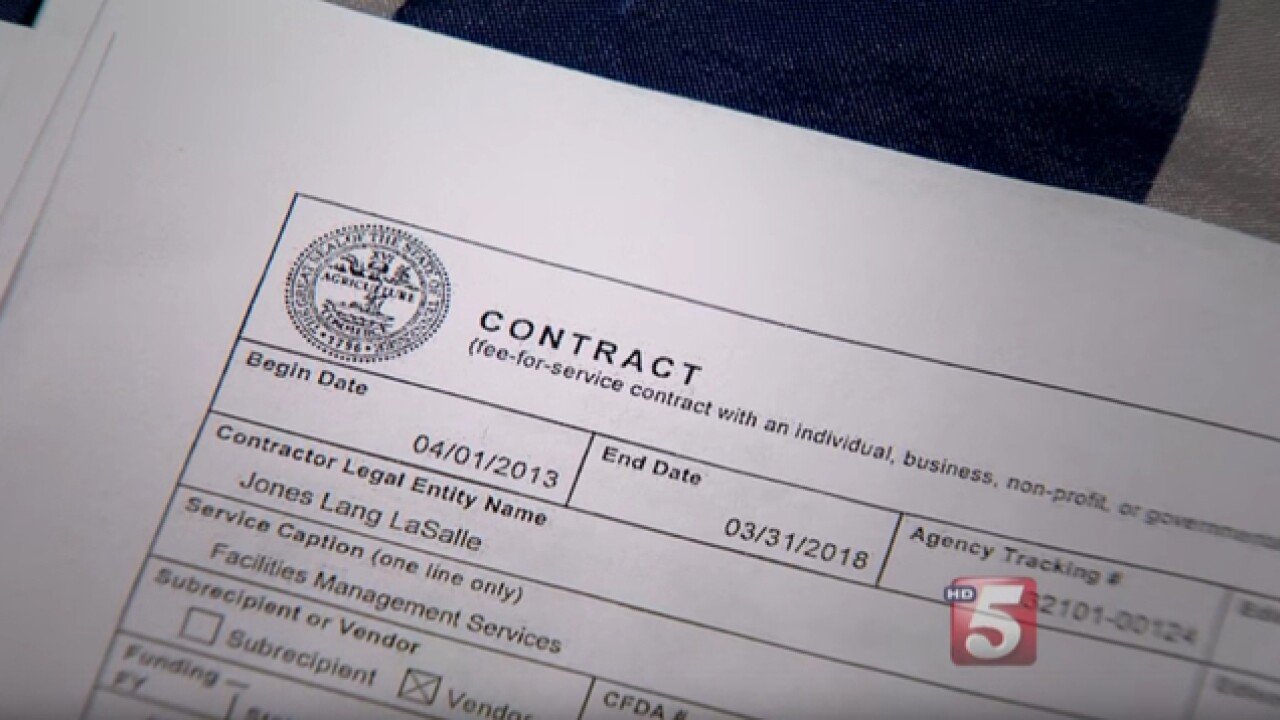 The Haslam administration had wanted to expand its controversial deal with Jones Lang Lasalle (JLL) yet again. But, by the time it got to the State Building Commission on Thursday, that had all changed.

It follows questions raised over the past year by NewsChannel 5 Investigates.

"What happened? Did someone say hold on, enough?" we asked Lt. Gov. Ron Ramsey.

"Well, yes, absolutely," he answered. "The speaker [of the House Beth Harwell] and I both spoke to them."

At the center of the controversy is a JLL consulting contract that had ballooned to 10 times its original amount through a series of no-bid contract amendments. Despite all the controversy, the administration had still wanted to give the company millions of dollars in new work.

The real debate, according to Ramsey, occurred behind the scenes of the State Building Commission.

That contract had been increased from $1 million to almost $11 million, and the administration had recently circulated a proposed amendment to expand it to $16 million.

At the same time, administration officials had warned members of the State Building Commission about dire financial consequences if it was not approved.

"That's the biggest thing that bothered me," Ramsey said, "is don't come to me on December 11th and say 'if this is not renewed by the end of the year that the world is going to come to an end.'

"I don't like working under those circumstances. You should have brought that to us in October."

That contract had also come under fire because JLL got paid to study the state's buildings, often recommending services that it then got paid to provide.

"You're right - it didn't look good," the lieutenant governor said.

So, with little fanfare, General Services Commissioner Bob Oglesby presented the Commission with a new amendment that, he said, will effectively conclude the JLL consulting contract.

"This will allow for the orderly wind down of contracted preplanning, facility assessment and master planning services," Oglesby said in the public session.

The new amendment also included language recommended by the state comptroller to begin the process of putting some conflict-of-interest protections into place.

"We pointed out what we thought could be perceived as problems, could be perceived as conflict of interests," Ramsey later explained. "We don't want that because, I think, we are doing such a great job in the Department of General Services that the last thing you want is any cloud over it at all."

Under the proposed amendment, JLL would have been paid to study the condition of even more state buildings, setting up the scenario where it could have profited from even more advice.

Still, despite what the lieutenant governor told reporters, the Department of General Services spokesperson continued to deny that those objections had anything to do with the change of plans.

"After a careful look, and realizing we had a full pipeline of projects, we decided it was in the best interest of the State not to pursue additional funds at this time," Kelly Smith said in an email.

"Through this contract we have been able to address some serious life safety issues and a lot of deferred maintenance, as well as improve the quality and efficiency of state office space, all while saving a considerable amount of taxpayer dollars."

In addition to the consulting contract, Jones Lang Lasalle also has another big contract for the day-to-day operation of state buildings.

That facilities management contract is not affected by Thursday's decision in any way.