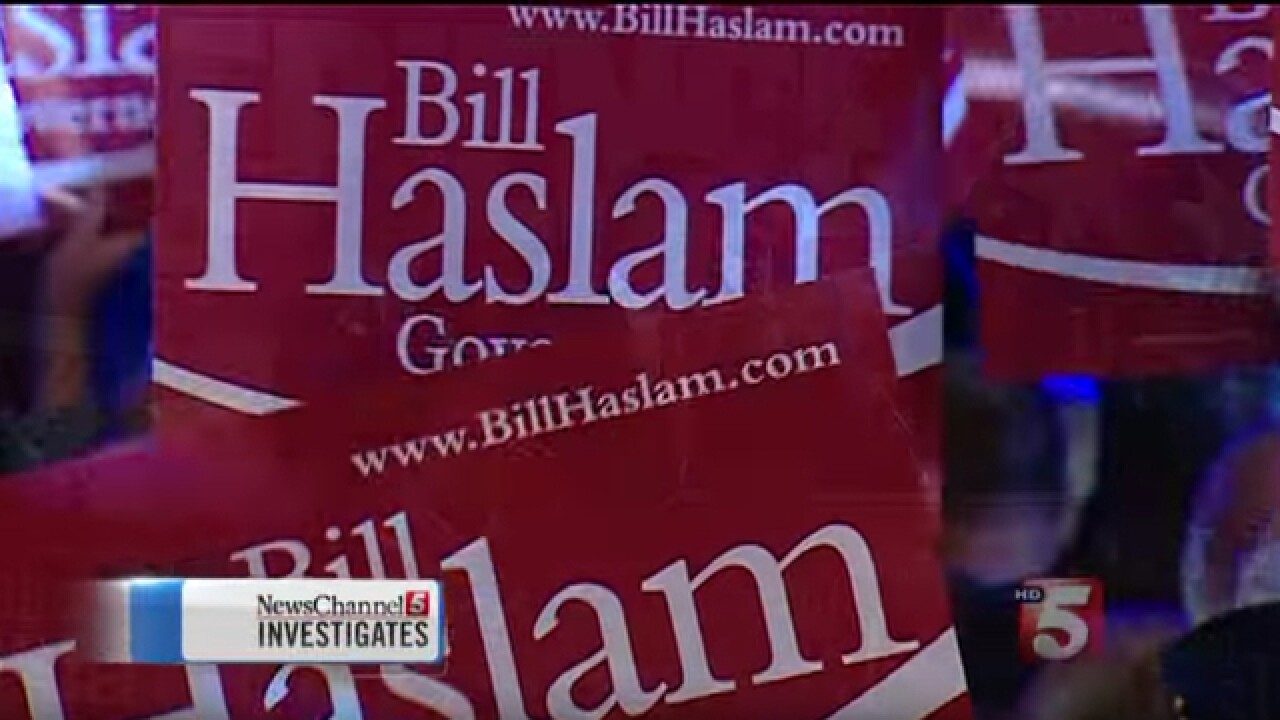 The emails reveal Ingram participated in campaign-related planning events while he was on the governor's private payroll.

State law requires campaign expenses to be reported on campaign financial disclosures so the public can see how much money was involved, but Haslam has insisted on paying Ingram privately.

"I've had him on personal retainer, no state money, no campaign money," Haslam told reporters in May.

The governor insisted that there's nothing wrong with having lobbyist and consultant Tom Ingram on his private payroll.

He said he hired Ingram to help with statewide "organizational" issues.

"It's not fair to have the state pay Tom -- and he wasn't doing political work where it should be campaign," Haslam said last month.

But the new emails reveal Ingram continued to do campaign work, planning for the governor's next election, while he was on the governor's private payroll.

In October of 2012, the governor's chief of staff, Mark Cate, e-mailed Ingram about a "2014 planning retreat."

Cate asked Ingram, as well as Haslam's campaign finance director and key office staff, to set aside eight hours over two days for the retreat.

Later, Ingram suggested having the retreat at the Loews Vanderbilt Hotel because he preferred "to get away from government space."

Haslam's office confirmed the retreat was campaign related about his reelection.

Drew Rawlins, with the Registry of Election Finance, said the law is clear: if someone is paid to do campaign work, it should be disclosed on campaign finance reports for the public to see.

But even though Ingram was receiving regular monthly retainer payments, the governor's office now says Ingram was not paid for the time he attended the campaign retreat.

Haslam's office did not provide details of the campaign retreat, but said it only lasted a couple of hours.

The head of Gill Media and former conservative radio host Steve Gill said the governor should stop hiding how much he paid Ingram.

"When you do something that looks suspicious, that's usually good reason for people to be suspicious," Gill said.

"The governor's campaign was never short on money, so it's not a matter of penny pinching when they decide we're going to pay this out of this account or that account.  It's because they didn't want people to know," he added.

Other emails reveal that in a September 2012 discussion with the subject line "planning session," Ingram told Mark Cate we "also needs [sic] to discuss super PAC."

Haslam's office said Cate did not know what the "Super PAC" reference meant.

Traditionally, the term refers to a political action committee that helps to support a candidate's campaign -- although it normally cannot coordinate with that candidate or his campaign.

A spokesman for the governor said that Haslam started paying Ingram out of his campaign account on July 1.

He said that was the plan all along as Haslam's reelection grew closer and it had nothing to do with outside pressure.

However, the governor has no plans to amend past disclosures to reveal what he has paid Ingram.

If someone filed a complaint with the Bureau of Ethics and Campaign Finance, the bureau could issue a show cause order to Haslam for failing to disclose campaign expenses, according to Drew Rawlins.

If a violation were found, the bureau could issue a fine.  The fine for nondisclosure is up to $10,000 per violation.