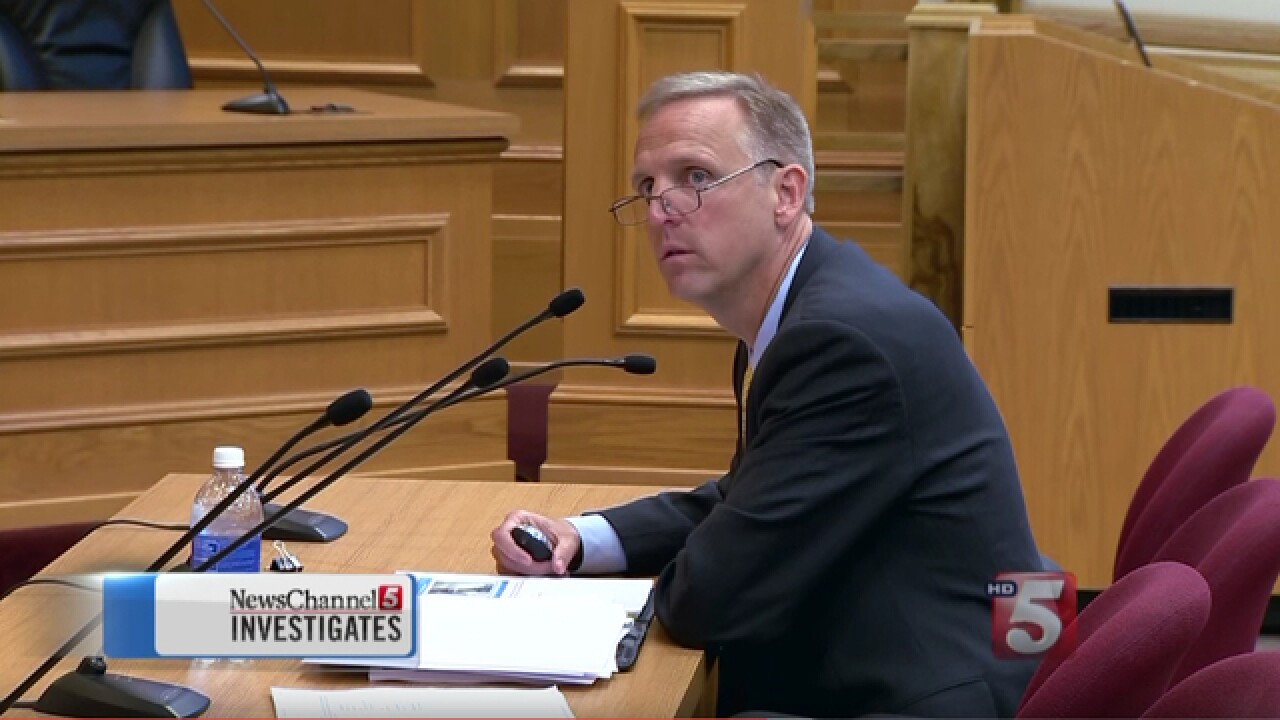 That was the message delivered Tuesday to state lawmakers by the governor's chief of staff.

Mark Cate defended the Haslam administration's decision to outsource the management of all state buildings to a private company.

He showed the legislature's Fiscal Review Committee examples of how state workers had failed to properly maintain those buildings.

And he insisted the contract with Jones Lang Lasalle will save taxpayers tens of millions of dollars every year, although he said the savings may not show up immediately.

Inside the hearing room, state lawmakers had few tough questions.

After months of refusing to personally answer questions, Commissioner Steve Cates insisted he had no regrets about his department's handling of state contracts.

It outsourced the state's motor pool to Enterprise Rent A Car -- without inviting other companies to bid -- even though NewsChannel 5 Investigates was able to find cheaper rates online.

"I can go to a website on a Saturday and click on a car rate, and I might get a better rate because cars aren't being used on a weekend than you can on an annual contract, but also you've go to manage that internally," Cates said.

There was also the outsourcing of the maintenance of other state vehicles to Bridgestone, which ended up being the only bidder.

Emails show that a key bidders conference was rescheduled at the last minute at the company's request.

"Why not tell Bridgestone, this is the date that has been set -- if you want the contract, you need to be there," NewsChannel 5 Investigates asked Cates.

"Well, then you would have got no bidders -- so what do you do then?" Cates answered.

"You really think they would not have bid?" we asked.

"I have no idea," he admitted.

Then, there was a million-dollar consulting contract that went to Jones Lang Lasalle -- a contract that the administration soon began expanding without taking any bids.

The administration claims after JLL won that first contract, it was always presumed that they would get extra work.

But, at the time, members of the State Building Commission, who approved the amendment, made a point of saying that they not want to make a habit of doing such no-bid contracts.

"This approval of this first amendment of the JLL contract is an exception to the State Building Commission competitive procurement policies for this amendment only," Treasurer David Lillard insisted.

Secretary of State Tre Hargett added, "If we approve today's extraordinary item, that doesn't construe that that's a new policy on our part."

NewsChannel 5 asked Cates, "Why do you think they were so emphatic we do not want to do business like this?"

"I didn't hear it that way," the commissioner claimed.

State Comptroller Justin Wilson also looked at the administration's plan to let JLL charge a commission to any landlord who wanted to lease the state a building, writing in an email that it "seems very wrong."

"What I would say," Cates said, "is any time that you have a major transformation and you have major problems, there are going to be a lot of questions. And we welcome the questions. That's how we get better."

Ultimately, JLL was selected over one other competitor for the big contract to manage all of the state's buildings.

Commissioner Cates claimed not to remember that two of the three members of the selection committee came from the governor's office.

Still, he insisted there's no way that politics could have played a role.

Haslam administration officials said that each of those contracts has saved the state money.

Still, the department has decided -- as our investigation suggested -- that the process for the vehicle maintenance contract may have excluded a lot of potential competition.

That work is now going back out for bids.