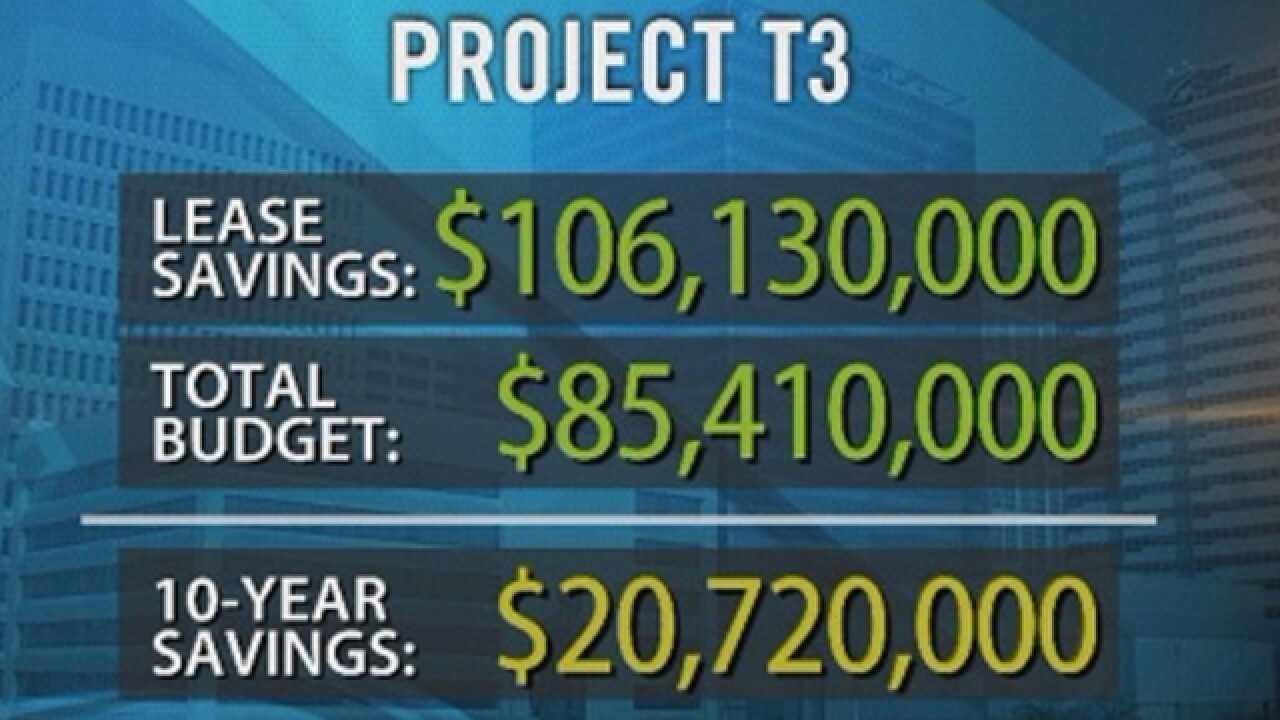 NASHVILLE, Tenn. -- An exclusive NewsChannel 5 investigation has uncovered questions about one of Tennessee Gov. Bill Haslam's pet projects and his claim of incredible savings.

That investigation discovered what could be an $80 million mistake in the governor's numbers.

Two years ago, the Haslam administration convinced lawmakers to write a check for tens of millions of dollars to consolidate state offices, saying it would -- in turn -- save $100 million.

But, after digging through thousands of pages of emails and other records, we discovered internal documents that suggest those claims may be inflated.

"This is a contract that's going to save the state $100 million over the next 10 years," the governor told reporters at an event last year.

It's a refrain that the Haslam administration has repeated again and again.

"Ultimately, through Project T3, it's going to lead to savings in excess of $100 million over 10 years," the governor's chief of staff, Mark Cate, told lawmakers back in July.

That $100 million was supposed to come from what the administration calls "Project T3," also known as "Transforming Tennessee for Tomorrow." That was a plan to pack state employees into brand new workspaces in buildings that the state already owns, allowing it to cancel dozens of leases.

It was first presented to the State Building Commission in February 2012 by Haslam's General Services commissioner, Brentwood developer Steve Cates.

"Can you help me understand the $100 million in savings that I've heard about, $100 million over 10 years? Is that a net savings or a gross savings?" asked Secretary of State Tre Hargett.

Cates testified that T3 would actually let the state cancel leases worth almost $180 million. Even after expenses of almost $80 million, the commissioner claimed, T3 would still save $100 million over 10 years.

It was a claim that the governor's chief of staff, Mark Cate, repeatedly emphasized to the legislature's Fiscal Review Committee back in July.

"So 10 years, $100 million," Cate said. "That's actually net savings after getting out of leases, consolidating space -- all of that nets out to $100 million of net savings over that time period."

But our investigation discovered that, a full three months before that testimony, the administration had an internal estimate showing that the actual "T3 Savings" were $43 million -- a lot less than the administration's $100 million claim.

We also showed Gilmore more recent internal estimates showing that Project T3 will save even less than expected and cost even more, resulting in net savings of just $20 million dollars.

That's $80 million short of what the administration has claimed.

"There's an issue of trust of what kind of information we are getting," Gilmore said. "Is it being done deliberately, or is it because somebody is just incompetent?"

The Haslam administration said that the decision to get rid of older state buildings like the Cordell Hull -- a process called "decommissioning" -- makes those savings more complicated to track.

"You can't separate decommissioning from T3, as we would have increased the occupancy in those six buildings had they not been deemed functionally obsolete," General Services spokesperson Kelly Smith said in an email.

But our analysis discovered that when all the spending associated with decommissioning is factored in, according to the administration's own numbers, the total operational savings are just $4.5 million over 10 years.  That's $450,000 a year. (To get to $100 million, the administration counts $85.5 in deferred maintenance that might be needed on those buildings and $10 million from the sale of the buildings.)

In addition, after we asked the Haslam administration to show us where it gets the savings they are counting on, they gave us a list of what was supposed to be canceled leases.

It's a list that, in some cases, was pure fiction.

Take, for example, a building in South Nashville. The administration's list takes a lease canceled for the Department of Labor and counts it twice, showing almost $1 million extra in savings.

The list also includes a canceled Department of Health lease at a Knoxville building, saving $1.3 million.

In fact, that lease has not been canceled.

And it claims savings of half a million dollars by closing a Department of Safety office in Chattanooga.

It doesn't count a new lease for a bigger building that will actually cost $1 million more.

"It causes me to be very disappointed," Gilmore said.

Those bogus claims, Gilmore said, raise even more questions about how much the Haslam administration is really saving taxpayers.

"And I think we are going to have to ask the questions to try to figure out which one it is."

Department of General Services officials refused to go on camera to answer questions about the $100 million claims.

Instead, the spokesperson sent us an email, focusing on the fact that state employees now have nicer and safer surroundings, while still saving some amount of money.

"I can't figure out why that would be such a bad thing," she added.

Our analysis discovered that, if you look at everything all T3-related spending, it actually adds up to more than $150 million, not $80 million, meaning that the potential savings could be even less.

NewsChannel 5 could not independently confirm where the administration really stands on his state goal to reduce the amount of state office space by one million square feet.

After a Department of General Services official referred to a document and quoted a much smaller number during budget hearings before the governor in December, we filed a public records request for that document.  The spokesperson refused to release it.

We were also unable to verify some of the administration's claims on its decommissioning costs.