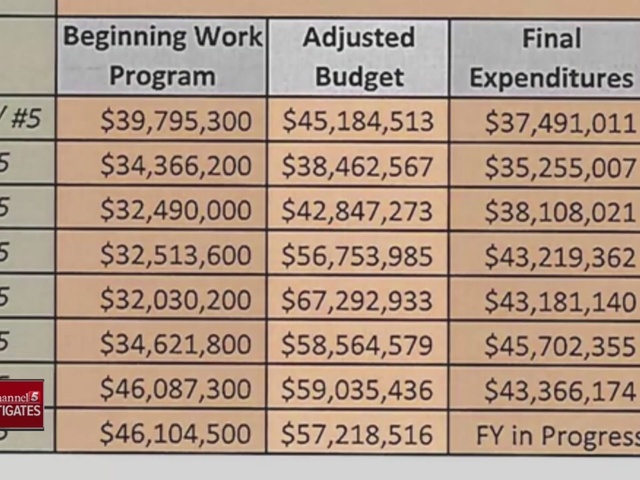 An exclusive NewsChannel 5 investigation has uncovered new questions about a major Haslam initiative. An exclusive NewsChannel 5 investigation has uncovered new questions about a major Haslam administration plan that was supposed to save taxpayers' money.

But our investigation discovered that effort -- to turn the state's vehicle operations over to private companies -- is costing millions of dollars more than lawmakers were told.

"When we look at something like this and it turns out that the proposed budget and the actual is not even close, that's very concerning," said state Rep. Mark Pody, R-Lebanon.

It was part of Tennessee Gov. Bill Haslam's promise to run state government more like a business.

While state employees once handled most maintenance of state vehicles, the Haslam administration outsourced the work to a private company.

A fleet of state vehicles were once kept on standby for state workers, but that job was outsourced to Enterprise's WeCar program.

The administration also sold off hundreds of state-owned trucks and cars, choosing instead to lease them -- all supposedly to save money.

But a careful analysis of state budget documents suggests the state's motor vehicle management operations have consistently blown through the budget numbers given to state lawmakers, now costing taxpayers more than ever.

In 2011-2012, the Haslam administration proposed a motor vehicle budget of $32.5 million dollars, but they overspent by more than $10 million.

The next year, they were $11 million over budget.

All that despite a major drop in gas prices.

NewsChannel 5 Investigates asked, "Do you feel like you've been lied to?"

The Lebanon Republican's response: "I believe I've been misled."

State officials say the budget numbers are complicated by the fact that, when other departments want to purchase vehicles -- a fire truck, for example -- those expenditures flow through the exact same account.

That can make it difficult for taxpayers to know what to believe.

Still, those officials claim they've got another set of numbers that show they always come in under budget.

"If you ran a business like this, you'd be bankrupt pretty quick," said former state Rep. Randy Stamps, who now heads the Tennessee State Employees Association.

We showed him the state's numbers.

But the Haslam administration came up with an "adjusted budget" of $67 million.

So when they spent $43 million, they claimed they were actually under budget.

"If I have the ability to double the amount in my budget every year from the original proposed budget to the adjusted budget, I could come in under budget every year," Stamps said. "I believe that's what they've tried to do."

And the administration's own numbers show major budget adjustments every single year.

"When you do that consistently over, I believe, it's six years, there's a problem -- if you are having to adjust your budget by tens of millions of dollars every year," Stamps added.

As for the administration's claim that the budget documents given to state lawmakers aren't necessarily the real numbers, Pody said:

"They'd better be. They had better be a real reflection because if I can't trust the very budget document that they submit for me to vote on -- and we've got the constitutional requirement in this state that we vote on a balanced budget -- that budget had better be correct before they bring it to us."

Despite the fact that motor vehicle costs have gone up year after year, the Haslam administration continues to insist that outsourcing is saving money.

But state finance officials admit no one has done an independent analysis to see if the numbers really do add up.

The state's budget director, David Thurman, told NewsChannel 5 Investigates that our investigation raised "a fair question" and that officials could do a better job of making sure lawmakers and the public are given the real numbers.