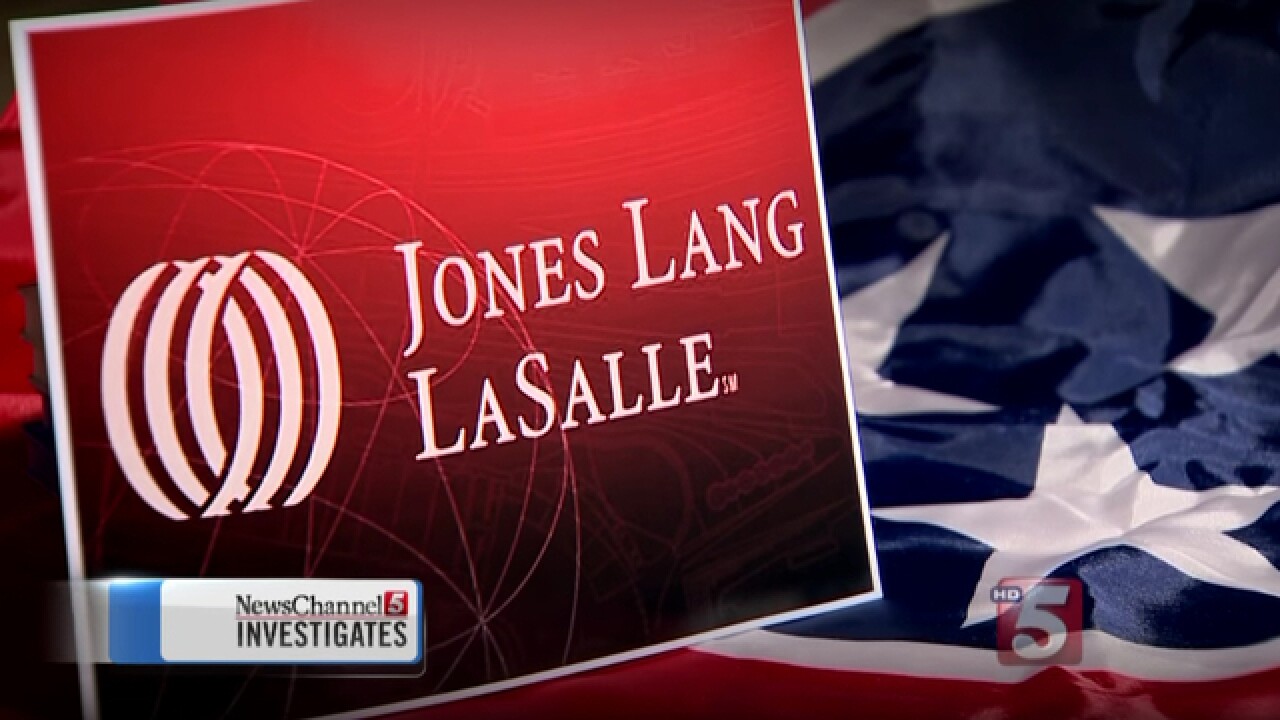 NASHVILLE, Tenn. -- There's new evidence that a big corporation found more ways to make money off of taxpayers than many knew.

Jones Lang Lasalle was the big company that the Haslam administration put in charge of the state's buildings. JLL, as it's known, has insisted that it's saving taxpayers a lot of money.

But our investigation discovered that every time a state agency makes a big move based on JLL's advice, the company also makes a lot of money.

In fact, what our investigation discovered inside invoices submitted by JLL had Jones questioning who's watching out for taxpayers.

"If I was gonna make a half a million, a million dollars on each one of those recommendations, I could make a lot of money real fast," she added.

"So it's a conflict of interest?" we asked.

"Oh, it's a serious conflict of interest -- serious."

Take, for example, JLL's recommendation that the state demolish the Cordell Hull state office building and sell off four other state buildings.

The company not only got paid for that advice, but the State Building Commission has already approved commissions of $2.7 million for JLL to negotiate just five leases for new space.

On top of that, invoices show that the Haslam administration agreed to pay JLL another $1 million to supervise the decommissioning of the state buildings.

And when state employees are moved, JLL also gets paid to supervise that process, as well.

But the best example of the potential conflict may be a building in MetroCenter.

JLL got paid to advise the Tennessee Lottery to move out.

Then, the company got paid to advise the Department of Children Services to move in to the very same building.

Part of the concerns that JLL voiced to the Lottery was the building's "mechanical and electrical systems," a less efficient "floor plate design" and "the risk of another flood such as MetroCenter has experienced" before.

Children's Services is moving out of the Cordell Hull.

"With all of the problems that DCS has and continues to have, we're going to move them into a building that's not efficient enough for the Lottery to work in, but it's gonna be okay for DCS," Jones said.

And one of the buildings where JLL took the Attorney General's Office for a tour, the Fifth Third Building at 5th and Church, is leased and managed by JLL itself.

The Attorney General's Office is also scheduled to move out of the Cordell Hull.

"This is totally ridiculous," Jones said.

She argued that taxpayers should not be paying for advice from a company that's trying to figure out how to make money off those same taxpayers.

"The public ought to be furious about that."

JLL said, in a statement, that state officials make the final decisions -- and that these questions about a potential conflict of interest disregard the company's own projections that it will ultimately save the state "tens of millions of dollars."

Here is the statement:

"Jones Lang LaSalle is acting in the best interests of the State of Tennessee to deliver tens of millions of dollars in cost savings through its expert real estate services.  These services are provided in accordance with the terms and scopes of work that were developed by the Department of General Services and are in compliance with applicable law, real estate industry practices and the firm's rigorous ethics policy.

"The recommendations JLL has made to the state have been consistent with the state's goals to reduce expenses, reduce underutilized office space and update office standards to improve productivity. The state provides the criteria, and then either accepts, rejects or modifies our recommendations in its complete discretion.

"By focusing exclusively on the cost of conducting this work, Channel 5 disregards tens of millions of dollars in savings to Tennessee taxpayers. Results of the state's competitive bid process for real estate services confirm that JLL's services are being provided at or below market costs and represent considerable savings over what the state had been spending on real estate management previously."

The Department of General Services said in a separate statement that it does not believe there is a conflict.

Here is that statement:

"The Department of General Services does not believe there is a conflict of interest.  Through a competitively procured process, Jones Lang LaSalle was selected to provide comprehensive real estate services.  Jones Lang LaSalle provides expert and professional real estate recommendations, but the Department makes all final decisions, based on what is in the best interest of the State.  These comprehensive real estate services are saving the State millions of dollars each year."

Still, one top governmental ethics expert has told NewsChannel 5 that she believes it is a conflict, which is why the federal government has rules against these types of contracts where consultants make recommendations that they get paid to carry out.