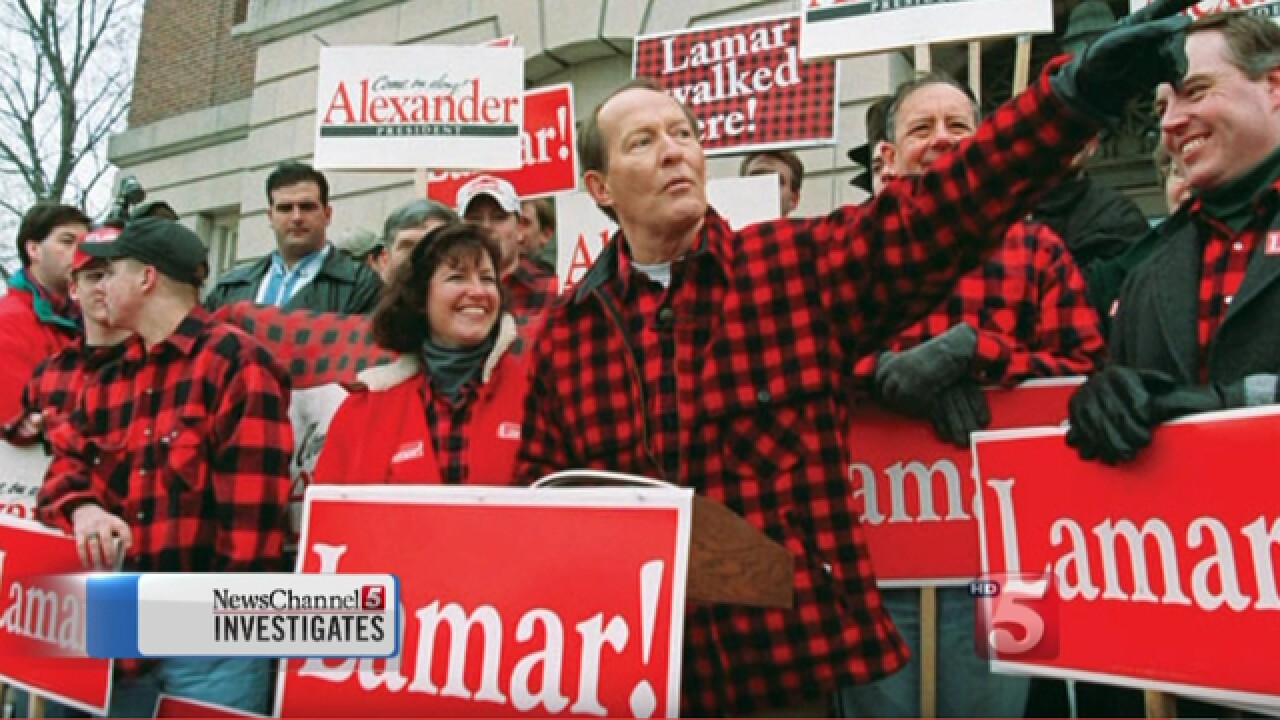 The taxpayer-supported museum had been working with Alexander's campaign on an exhibit that would travel across the state -- while the senator was running for re-election.

After NewsChannel 5 Investigates requested e-mails from the state museum, officials abruptly postponed the exhibit until after next year's election.

The e-mails show Alexander's campaign worked with the museum on the timing and even funding for the exhibit.

The exhibit highlighted Lamar Alexander's two terms as governor and his unprecedented swearing in three days early to end the scandal-plagued administration of Gov. Ray Blanton.

"This is one of the pivotal stories in Tennessee's contemporary political scene," said Lois Riggins-Ezzell, the museum's longtime executive director.

"When we first started talking about it, there was a general understanding that he probably wasn't going to run," Riggins-Ezzell insisted.

But even after Alexander announced he would seek re-election, the museum communicated with campaign employees and planned to open the exhibit next month in East Tennessee, then take it across the state through next year's election.

"There's no way anyone looks at this and says, 'Yeah, that's fair,'" said Ken Marrero, executive Director of the Nashville Tea Party.

"Run it starting November 7, next year.  Don't run it while the senator is out there campaigning," Marrero said.

Just days after we started asking questions, the museum postponed the exhibit until after the election.

"The decision was made based on all the factors you are bringing up," Riggins-Ezzell said.

Emails show the chief curator at the museum wrote Alexander's campaign manager in January: "I understand that the Senator would like to have the exhibition open at the Museum of East Tennessee History in Knoxville ... If there are some dates in August 2013 that might be more convenient with you, please let me know."

A month later, Alexander's campaign manager, Alice Rolli, wrote to the museum's curator: "Tom Ingram and I would like to re-connect with you and Lois in the next few weeks with respect to the traveling Come on Along Exhibit."

Ingram is Alexander's former chief of staff, who was paid $30,000 by the campaign in the first three months of this year.

In April, the chief curator at the museum asked an employee of Tom Ingram's consulting firm: "Do we have any word on funding?"

The employee responded, "I'm looking into this and will be back in touch with an answer mid-week."

NewsChannel 5 Investigates asked Riggins-Ezzell, "Was it up to the campaign to try and fund this?"

The budget for the traveling exhibit was estimated at nearly $44,000.

Riggins-Ezell said that they did not have funding in place when they postponed it, but the museum, not the campaign, would have found private money.

"Would we have asked someone for suggestions of someone who might be close to the governor or senator, and who might have an interest in seeing the exhibit go forward, like a Nissan? Yes," Riggins-Ezzell said.

One document with Tom Ingram's handwritten name at the top seems to map out months and locations for the exhibit, but Riggins-Ezell said they weren't trying to coordinate with the campaign.

They just wanted the exhibit to follow the same route Alexander walked across the state in the late 1970s when he ran for governor, she said.

"You have months worth of planning and conversations and when a reporter asks about it, 'Well we're going to pull away, now the timing is bad," Marrero said.

The campaign said it was just trying to coordinate Alexander's busy schedule with museums across the state that wanted him to appear, nothing more.

Alexander's spokesman Jim Jeffries sent a statement which said:  "As far as Senator Alexander is concerned, 2015 is as good as 2013. The exhibit is about Tennessee history, and he's not ready to go down in history yet anyway."

Officials with the Tennessee State Museum said they still plan  to tour the exhibit after the election is over.