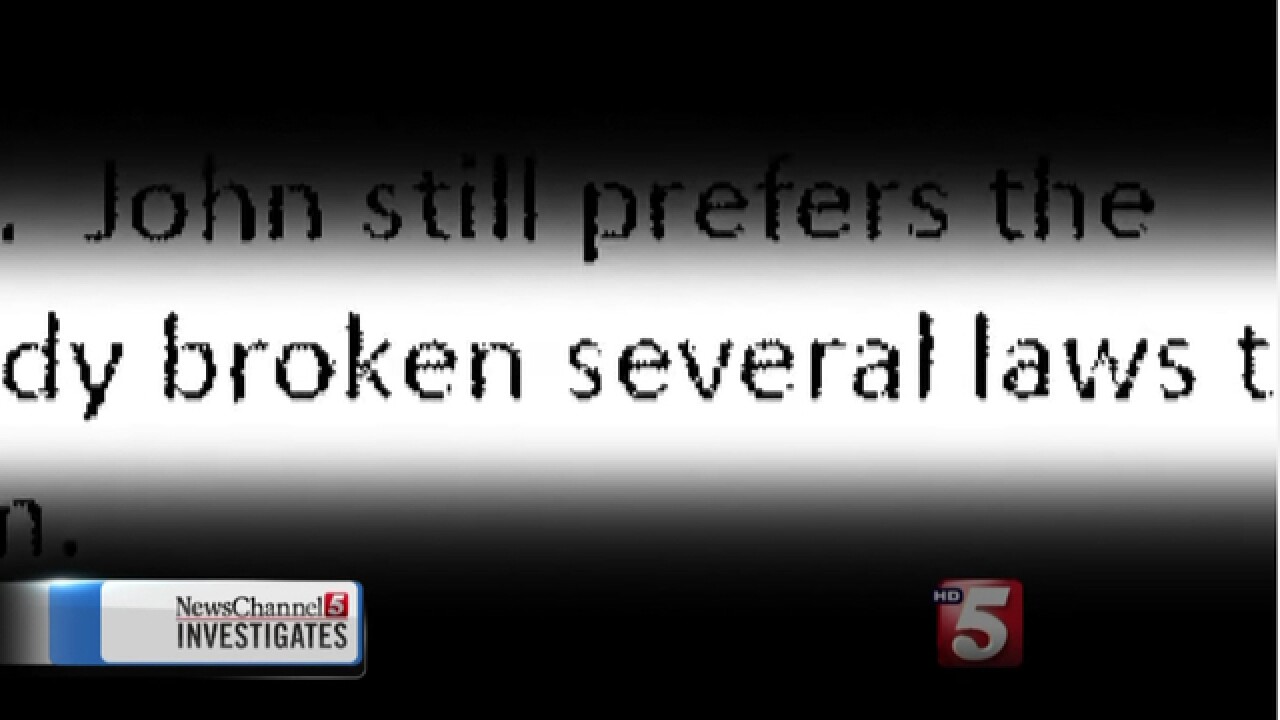 That startling statement -- made by a career state employee -- describes how the Haslam administration handled one questionable contract.

It's contained in new email messages just obtained by NewsChannel 5 Investigates -- messages in which that state employee complained about taxpayer money being steered to a company with connections.

The emails emerged as part of a legal claim, seeking damages, filed by Sanders Moving Company.

Sanders is a Nashville firm whose history dates back to the horse and buggy days.

Last year, the Haslam administration abruptly canceled a moving contract that the longtime Tennessee company had with the state. Sanders has argued that it was done to give the business to Flood Brothers Moving out of Atlanta.

"This is not a company that is afraid of competition," said Harold Donnelly, attorney for Sanders Moving. "They are fierce competitors. They just want everybody to be following the same rules."

He specifically blamed Atlanta native Leah Shrock, an employee of Jones Lang Lasalle. That's the big corporation that the Haslam administration put in charge of the state's real estate.

"I know we redid [the statewide contract] four months early so Leah could get Flood Brothers on there," Herron wrote.

Donnelly said the emails speak for themselves.

JLL has been supervising a multimillion-dollar redesign of state offices that has required the relocation of whole departments.

In one email, the career state employee wrote, "JLL only wanted to use the bigger companies and therefore made the requirements so strenuous that the smaller companies couldn't compete."

This summer, Haslam administration officials told lawmakers that the contract was redone partially so that durable shipping crates like the ones shown in a Flood Brothers video could be used for the moves.

"This is unprecedented, unprecedented moves," the governor's chief of staff, Mark Cate, told the legislature's Fiscal Review Committee. "So to do that, we had to get the right, we needed the movers that could do this in a way that was the most efficient."

Still, the emails indicate that diversity experts within the Department of General Services had "has declared the mandatory use of crates to be discrimination" against smaller moving companies that might want to compete for the work.

In addition, the claim filed by Sanders Moving alleged that state officials also allowed Flood Brothers to illegally change the prices on its bids to undercut its competitors.

And when Sanders was the winning bidder on one project, Herron's emails claimed that the JLL employee suddenly wanted to "change some of the stipulations of the move, making it more difficult for Sanders."

He added that a complaint from a Flood Brothers official "stirred up all the indiscretions and illegal actions he has done. He shouldn't be throwing stones when he has done far worse on many occasions."

Both officials from the state and Jones Lang Lasalle refused to go on camera to answer NewsChannel 5's questions.

A spokesperson for the state Department of General Services released the following statement:

"The Department of General Services is acquainted with the issues being raised and is looking forward to fully addressing them at a proper time in the future.  As you know, this matter is presently the subject of ongoing litigation and it would not be appropriate to comment any further at this time.  Further questions should be directed to the Attorney General's Office."

In a statement, JLL admitted that it has worked with Flood Brothers in the past, but insisted that any suggestion that it steered state business to anyone is "entirely false."

Here is the company's statement:

"Jones Lang LaSalle's role in the procurement process for movers was limited to supporting the State's personnel, just as it does on other procurements. All of JLL's actions were proper and in conformity with its contract and Tennessee law.

"JLL did not share any information, including information about the Tennessee procurement process, with anyone from Flood Brothers prior to their being selected for award by the State. Any allegation otherwise is false.

"While JLL has previously interacted with Flood Brothers in the performance of moving services, as it has with many moving companies, the firm had no role in recruiting Flood Brothers to this project or advocating on its behalf.  Any allegation otherwise is, again, entirely false."

One of the owners of Flood Brothers also denied that there had been any illegal activity, but he declined further comment.

As for the state employee who wrote the emails, he complained that he was taken off the moving project because he refused to go along.