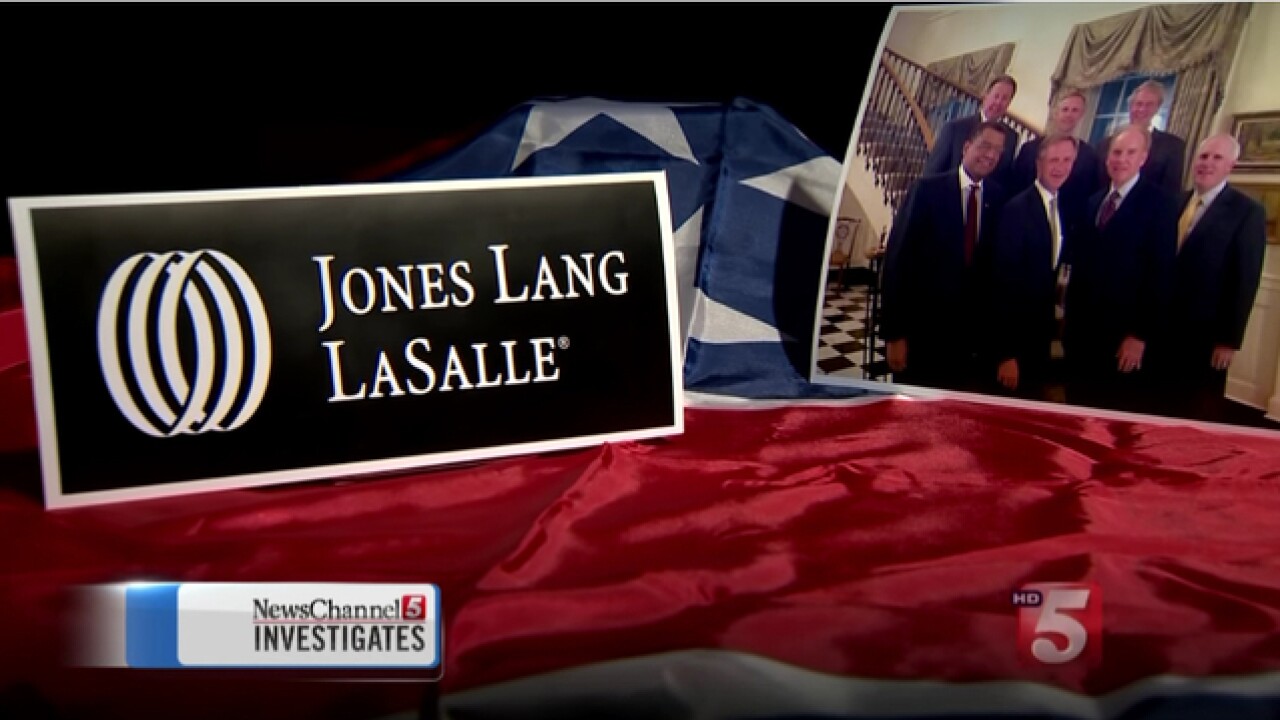 NASHVILLE, Tenn. -- A day after a critical audit of a big state contract, the Haslam administration is making no apologies.

In fact, NewsChannel 5 Investigates has learned that it may be about to give even more of your tax dollars to the company at the center of the controversy.

Now, officials are circulating a $5.3 million expansion of the controversial contract with the real estate giant Jones Lang Lasalle.

During budget hearings before the governor, General Services Commissioner Bob Oglesby made no mention of the just-released state audit -- an audit that questioned the state's deal with the Chicago-based corporation.

JLL got paid to study the state's building needs, then it got paid millions of dollars to implement its own recommendations.

NewsChannel 5 Investigates asked Oglesby, "The audit was very blunt that JLL cannot be trusted to give impartial advice when it has a profit motive. Do you disagree with that?"

"That's not the way I read that at all," the commissioner responded.

So we went back to the audit, and there it was on page 29.

"Because JLL can benefit financially from the advice it renders the state, we believe that it cannot offer unbiased, impartial advice in the state's best interest," auditors said.

We asked Oglesby, "So what's wrong with that statement?"

"Which part of that statement?" he asked.

"That JLL cannot be trusted to give impartial advice when it has a profit motive," we answered.

"I'm not even sure I understand that comment," he answered.

As our investigation first revealed, JLL was first awarded a $1 million contract to study the conditions of some of the state's buildings.

That million dollars quickly grew to almost $8 million as JLL got paid to carry out its own suggestions.

Now, the administration is preparing to pay JLL the additional $5.3 million to study more state buildings -- and make more recommendations.

"JLL doesn't have the final say. It's got to come back -- anything involving a lease or a building has got come back before the State Building Commission and has to be approved by the department as well," Gov. Bill Haslam told reporters after the budget hearings.

While the governor did not hint at future plans, he said that the Jones Lang Lasalle contract has saved taxpayers money -- and he left open the possibility of giving more of that money to JLL.

"So whether it be that contract or anything else, you take what you know and what you've learned and what you need at that point in time and make a decision on it," he added.

The proposed new expansion of that contract will eventually make its way to the State Building Commission for final approval.

Late Thursday, a spokesperson for the Department of General Services emailed that "we are still in discussion phase, nothing is final at this point."

She added that "if executed, this will be the final amendment to the contract."

JLL also has another multimillion-dollar contract where it gets paid for the day-to-day operation of state buildings.