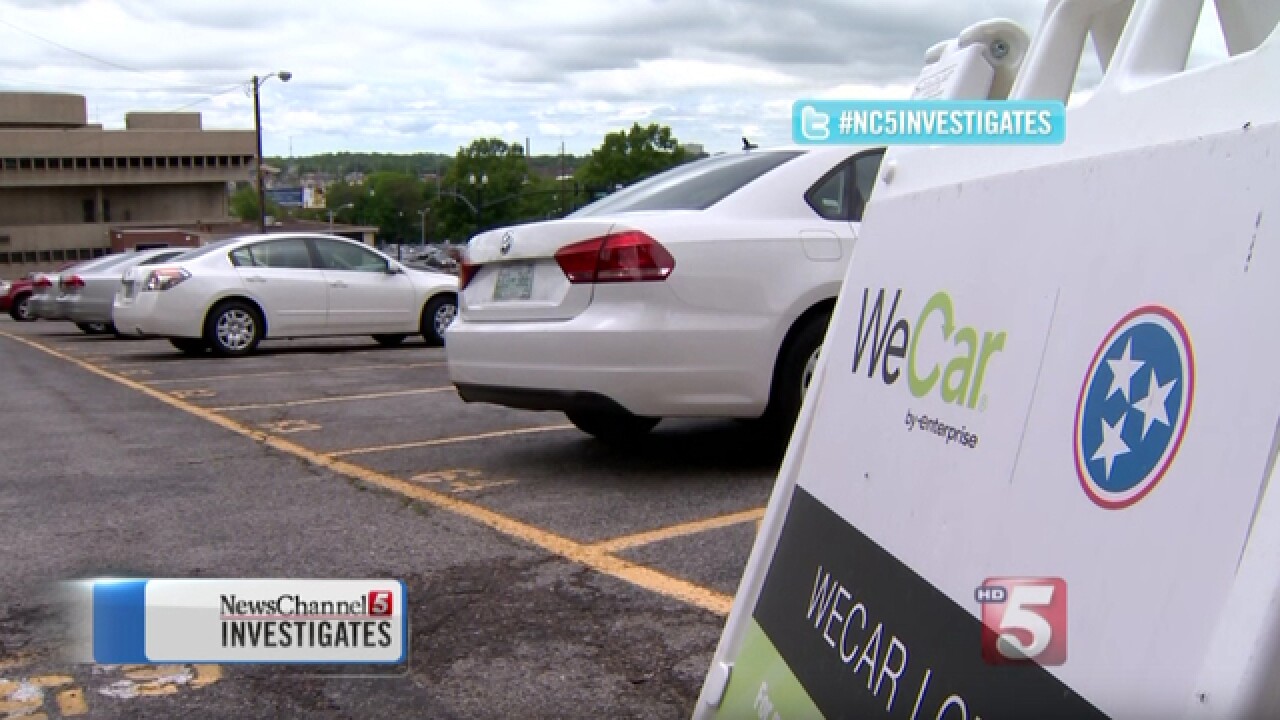 NASHVILLE, Tenn. - An exclusive NewsChannel 5 investigation has discovered some state agencies may be paying more to rent cars than they should.

But the company behind the contract to outsource the state's motor pool insisted that it's not the one responsible for the questionable charges.

In fact, Enterprise Rent A Car prides itself on customer service. It's an attitude that our undercover producer saw on full display.

Need to return a car early? The friendly sales people insisted that it would be no problem.

"Only charged for a week," one salesman assured us.

"Only charged for what we use it for?"

And if we're running just a few minutes late to return a car? Again, we were told, no problem.

But what we discovered inside bills that Enterprise sent to state agencies -- like the department that used a car for three hours but got charged for three days -- had taxpayer watchdog Ben Cunningham shaking his head.

"I expect the state to do what any consumer would do," said Cunningham, who heads the group, Tennessee Tax Revolt.

"If you use it for three hours and yet you are billed for three days, go back to the vendor and raise hell and get the best possible deal."

As our investigation first revealed, the Haslam administration outsourced state government's motor pool to Enterprise and its WeCar car-sharing program. It did that without giving any other company a chance to compete for the job.

But while the state contract with Enterprise specifically calls for "hourly car-sharing services," there are no hourly rates.

So when the Department of Education checked out a mid-size car and used it forjust 51 minutes, Enterprise sent them a bill for $34 -- the full daily rate.

When the Board of Probation and Parole reserved a minivan for exactly one hour, even though no one ever showed up to get it, the agency still got hit with a $48 charge.

"The contract is for 'hourly rental car services. NewsChannel 5 Investigates noted. "What does it say that they don't have an hourly rate?"

And even though state employees get locked out of a WeCar at the end of a trip, Enterprise still sends them a bill for the full reservation if they end a trip early -- unless they take the time to go online and change the reservation.

Which is how the Department of Correction, after using a car for just two days, got a bill for four days. That's because the original reservation was for three days -- and 30 minutes.

And while the state's contract with Enterprise offers a cheaper weekly rate, it usually doesn't show up on bills it sends to state agencies.

So when the Department of Education rented a minivan, it got the daily rate times seven. The weekly rate would be almost $50 cheaper.

"Again," the taxpayer watchdog said, "any typical consumer spending their own money would look into this and find out why they didn't get the best rate."

But Enterprise insisted that it doesn't get one cent more than it should.

That's because, when the Department of General Services negotiated the deal, it promised Enterprise a guaranteed amount each month.

And after Enterprise bills all those state agencies, General Services always has to write a check to make up the difference.

Cunningham noted that the more that General Services can charge to other agencies, the better the contract looks on paper.

"It's numbers game, made to make this contract look better than it is," he suggested.

As NewsChannel 5 Investigates previously reported, in the last 12 months, General Services had to pay $289,000 to make up the difference.

In fact, Enterprise said that it generates the bills based on rules specifically set up by the state and that General Services approves every bill before it goes to the other departments -- including those questionable charges uncovered in our investigation.

"If you ran your own business like this, what would be the result?" we asked Cunningham.

"You would be losing money," he said, "and clearly you would not run your business this way."

NewsChannel 5 did not find any questionable charges where state employees actually went to an Enterprise location and dealt with those customer service agents.

These charges just involved cars picked up from the state's WeCar parking lots.

In those cases, Enterprise says they just did the bills the way that they are told to do the bills.

A spokesperson told NewsChannel 5 Investigates in an email:

Any rental rate or fees billed to individual agencies are for State of Tennessee internal billing purposes only. Never do these charges result in the State of Tennessee's bill exceeding their already established plan fee. Enterprise does not ever collect any revenue above the contracted plan fee.

As for General Services officials, they still refused to go on camera to discuss any aspects of the Enterprise contract.

But a spokesperson insisted that other state agencies should know the rules. If they don't question the bills, then -- she said -- it's their responsibility.

Still, as a result of NewsChannel 5's investigation, state lawmakers are also questioning this contract.

General Services officials will appear before the legislature's Fiscal Review Committee next Monday to answer those questions.