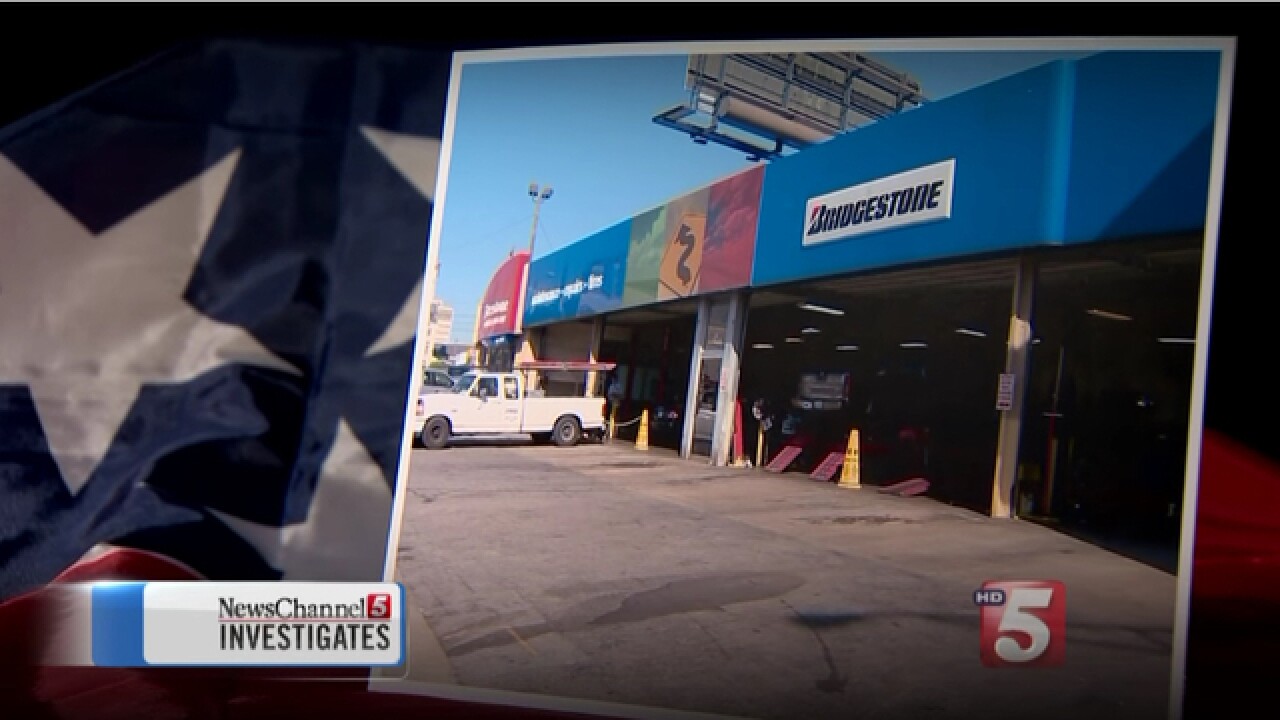 NASHVILLE, Tenn. - Are you getting your money's worth from a multi-million dollar contract for maintenance on state vehicles?

Two years ago, the Haslam administration took that job from state employees -- and outsourced it to a big corporation, Bridgestone Retail Operations and its chain of Firestone stores.

The contract was supposed to save taxpayers' money.

But NewsChannel 5 Investigates discovered some examples where you're actually paying more.

"I think we may have been penny wise, but pound foolish," said Rep. Mark Pody, R-Lebanon. Pody sits on the legislature's Fiscal Review Committee.

It all stems from a state contract to outsource oil changes, tire rotations and other work on the state's fleet of more than 4,000 vehicles.

After the Haslam administration put out the contract two years ago, the only company that put up a bid was Bridgestone/Firestone -- a company once headed by Haslam's finance commissioner, Mark Emkes.

Emkes insisted to NewsChannel 5 that he played no role in the contract process.

"Anytime that we are doing something like this where there is only one person or one company that says I qualify for that bid, it would cause a red flag," Pody said.

The lawmaker was alarmed by the spending that we discovered and questioned how the state of Tennessee could end up with just one bidder for a vehicle maintenance contract that has already cost taxpayers more $2.1 million in the last 21 months.

"In any kind of bidding process, it has to be written so that several people can compete. Otherwise I could write a bid proposal where only one company could qualify," Pody added.

The outsourcing initiative has been pushed by Haslam's General Services commissioner, Steve Cates.

But when the vehicle maintenance contract was put out for bids, Cates' department excluded oil change locations like Jiffy Lube because the department insisted the vendor also had to be able to do repairs.

Local repair shops were also excluded because the vendor had to be able to service vehicles statewide.

And other major players, like Walmart, were not even invited to bid.

"I think the red flag starts when you have a very limited number of people that you ask to bid, because it's just common knowledge that there are a lot of folks all across the state that do that type of work," said former House Finance chairman Rep. Craig Fitzhugh, D-Ripley.

NewsChannel 5 Investigates discovered that Bridgestone/Firestone was so tight with state officials that, one day before an important vendors meeting, other interested companies were suddenly told that it had been rescheduled.

What they did not know was that Bridgestone had told the state that the original date was just not convenient for them.

In fact, emails show Bridgestone was the one suggesting new dates for the vendors conference. The company even pushed for some "private discussion time" with state officials to discuss the bidding process.

"It was almost like there was something [where] they knew that this was the company they had to have at that meeting," Pody observed.

Department of General Services officials did invite Goodyear to bid.

But after that vendors' meeting was rescheduled for Bridgestone's benefit, Goodyear executives from Ohio were not able to make that conference.

In the end, a company spokesperson told NewsChannel 5 that they decided not to bid because, given the way the solicitation was written, they were not sure they could meet the state's expectations.

And recordings show that when that meeting was held here inside state offices, the moderator told one interested vendor that the process was on such a fast-track that he probably would not have time to find partners he would need in West Tennessee to be able to bid.

"It would be kind of complicated, I believe, to partner up with somebody else in this short length of time," he said. don't know. But I would say probably it's going to be pretty tough on you."

Fitzhugh said that "something as simple as dividing that contract into East, West, Middle could have allowed more contractors to bid on that."

Which is how the state ended up with a contract that charged taxpayers a respectable $25.99 for an oil change -- but invoices show the company has really made its money on parts.

Take, for example, that headlight bulb.

Records show that the state could have bought it for $1.74 from a separate contract that it has with a parts companv. Bridgestone's charge: $12.34, plus another $23 for installation.

That air filter, on the state parts contract, is listed for $4.04.

"If I am the only one bidding, and I know it, it's harder for me to say I'm going to have the cheapest price when I know I can add a little bit extra in there," Pody said.

The Department of General Services argued to NewsChannel 5 that our price comparisons "do not take into account the brand, quality and/or warranty of the particular products."

Still, they admitted that they had expected the Bridgestone contract to cost $952,000 a year, but it's now averaging $1.2 million a year -- a quarter of a million dollars more.

As for Finance Commissioner Emkes, he told NewsChannel 5 in an email:

"In my position as Commissioner of Finance Administration, I am not involved in contract negotiations. In the contract that you have referenced, not only was I not involved, but my advice was not solicited."