State demands response from Metro Nashville about its finances 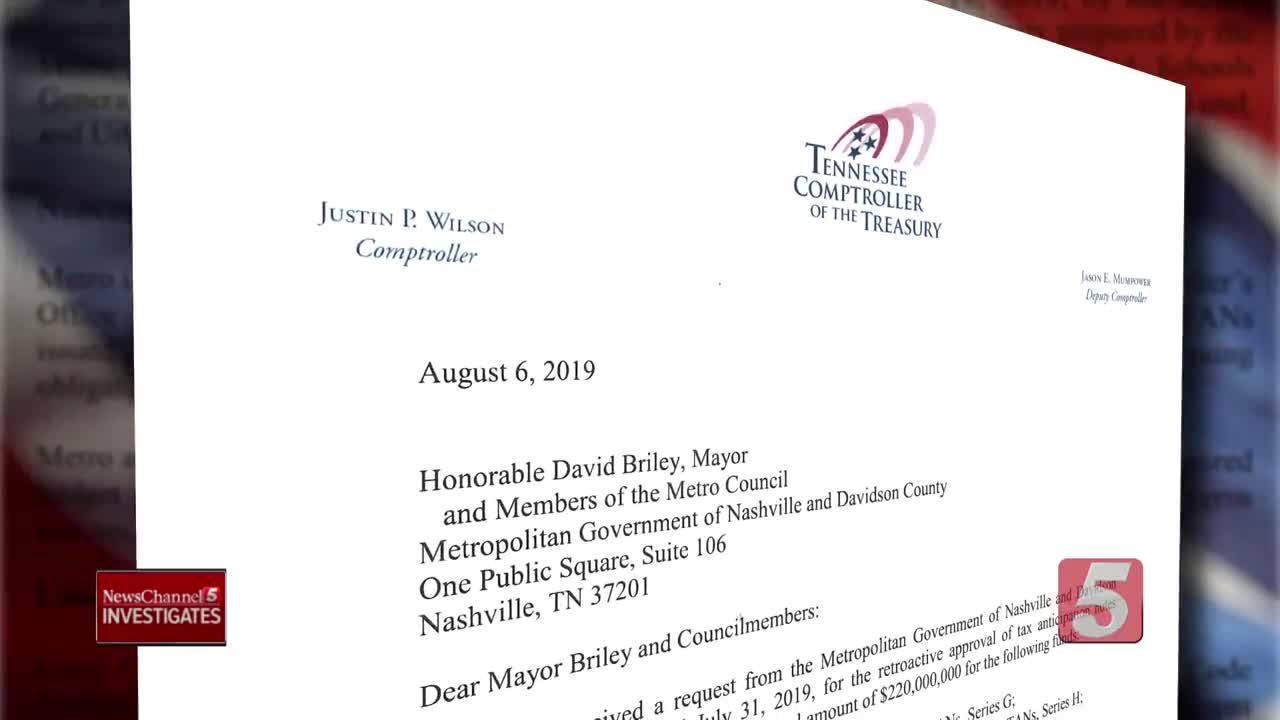 The Tennessee Comptroller sent a letter to Mayor Briley voicing concern about Metro's ability to balance this year's budget. Mayor tells departments to come up with "savings." 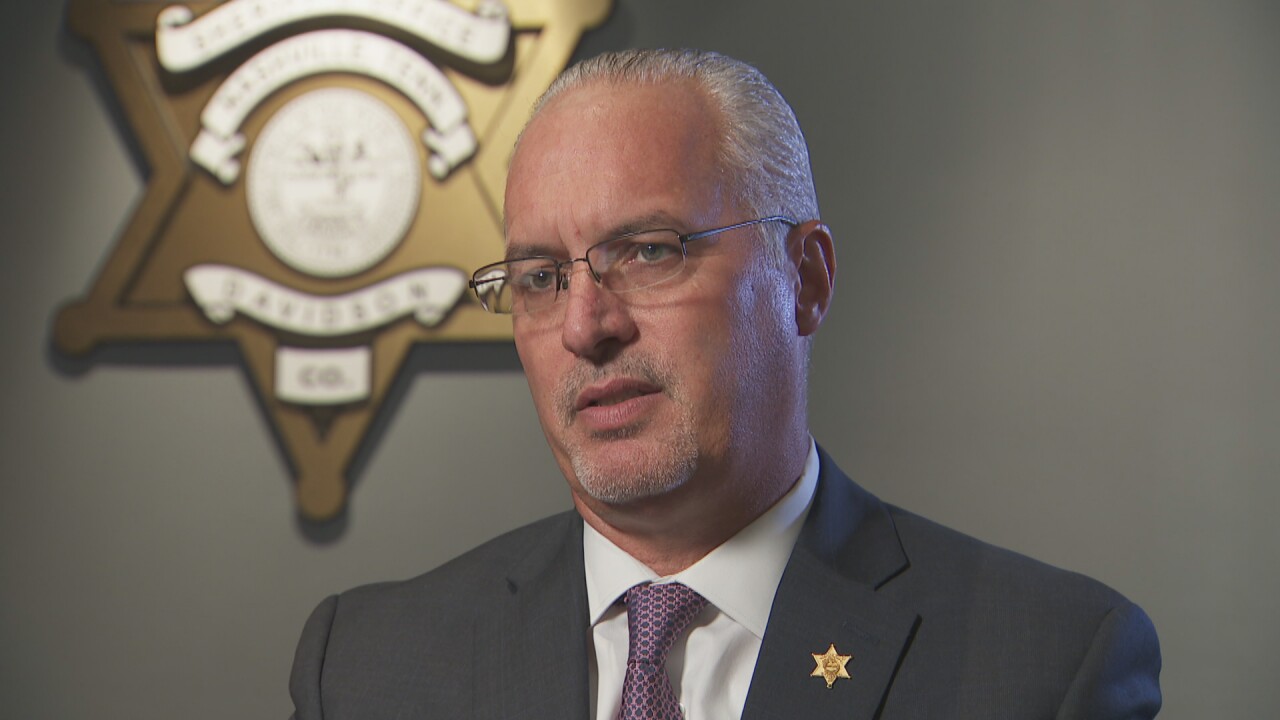 He is hoping the savings will generate more than $12 million this year.

This month the Tennessee Comptroller sent the Mayor and Metro Council Members a letter voicing concern about Metro's finances.

"I've been here all my life, living in Nashville. It's the biggest boom we've ever had, but we don't have any money," Sheriff Hall said.

The Sheriff said the Mayor and Metro Finance Department sent him an e-mail asking him to find $636,300 in "targeted savings."

NewsChannel 5 Investigates asked, "Will you be able to meet that amount?"

It's the second year in a row the Mayor has asked nearly every Metro Department to find so-called savings after the council approved their budgets.

"If the Mayor's Office wants to cut people's budgets they should do that in a public way so the Council could ask 'What does that mean to you?' Don't do it a week after the budget is approved, telling me what the planned savings are."

The Mayor asked the Metro Police Department to find nearly $2 million in savings for a second straight year.

The Fraternal Order of Police said the department is already understaffed by at least 180 officers.

"Demanding targeted savings will compromise the ability of the MNPD to provide efficient and effective services to its community. Public Safety is the top priority of government. Failing that priority will have disastrous consequences," said FOP President James Smallwood.

And the Metro Fire Department must find $586,300 in savings for a second straight year.

The fire chief said the department "will do its best" to achieve the savings "without negatively impacting services."

Last year the department cut the number of firefighters working certain shifts to achieve the savings.

Earlier this month the State Comptroller's office sent an unusual letter to Mayor David Briley and all Metro Council Members.

"We're seeing there is a spending problem to some degree in Nashville and that there's a cash management problem in Nashville," said John Dunn who is the spokesman for the Comptroller.

The Comptroller reviews county and city budgets when debt is involved.

The letter shows the state has concerns about Metro's ability to balance this year's budget.

Metro's current budget is counting on $30 million from the sale of parking meter enforcement rights, but that sale is in limbo and will need to be approved by the Metro Council.

The state is demanding "a summary that explains the impact of the sale of assets, including property and parking rights" on this year's budget.

The Comptroller actually has the authority to take control of Metro's finances.

It could order cuts or even raise taxes if it looks like Metro is in financial trouble.

Dunn stresses Metro is not close to that yet, but the letter should be taken seriously.

Mayor Briley issued the following statement about the Comptroller's letter:

"The letter from the Comptroller’s Office underscores the very real budget challenges I’ve been working to resolve in my first year as mayor. Today’s realities were set up in 2017. The budget passed by Council that year dug deep into reserves and failed to set the property tax at the correct rate. It also resulted in the city reneging on promised cost-of-living raises for Metro workers, first responders and teachers in 2018.

While I wish we could have completely recovered from this in one year, it will take some time. I am proud that we have made great progress. Based on projections of $100 million in new revenue, my FY20 budget provided cost-of-living and step increases for all Metro workers, raised starting police pay 6.4%, gave teachers their highest cost-of-living adjustment in a decade, and brought all Metro workers on the pay plan to $15 an hour or more. We are on the right track, but we have more work to do – and we are up to the challenge.

As I have said many times, to fully implement the necessary improvements to our budget, we will need to take a close look at all revenues, including property taxes. While some have called for new city revenues to come out of the Convention Center Authority, state law and bond commitments substantially restrict the use of those funds for non-convention center and tourism-related expenses. Metro does not have the legal ability to commandeer those funds for other general government operating expenses. This is why I’ve continued to say that we need a robust public dialogue in the coming year about our city’s finances, needs and goals, so that any tax and revenue decisions can be as accurate and informed as possible."

Metro now has more than twice as much debt as the state of Tennessee.

Metro is more than $4.5 billion in debt.

"I've never seen it happen since I've been here where a state agency gets involved and says 'Hey its time to get that in order,'" said Sheriff Hall.

Sheriff Hall cut a mobile booking unit last year but still did not meet the targeted $636,300 in savings.

"I don't want them to assume they are going to be able to get savings out of this operation until we get the money we need to run it," Sheriff Hall said.

He's aware Metro's in financial trouble, but in his 20 years as Sheriff he has never seen budgets done this way.

"I would hope the city finds a better way to budget and have this process in a public discussion instead of coming up with savings after the Council makes their vote," Sheriff Hall said.

Mayor Briley's office said the targeted savings goals were a recommendation from the Blue Ribbon Commission that reviewed Metro's budget. He says they were clearly communicated to each department throughout the budget process.

Here is the Mayor's full statement on the targeted savings:

"Per recommendations from the Blue Ribbon Commission, every department in Metro was again given a targeted savings goal this year. The goals for all public safety agencies were held flat from the amount last year. These savings targets were clearly communicated throughout the budget process by the Metro Finance Office and the Office of Management and Budget.

Mayor Briley was pleased that his budget delivered 3% cost-of-living adjustments and open-range pay increases to Metro workers, including all first responders. He was also able to raise the starting pay for police by 6.4%. He meets regularly with MNPD Chief Anderson and NFD Chief Swann and fully supports the work of all members of law enforcement."