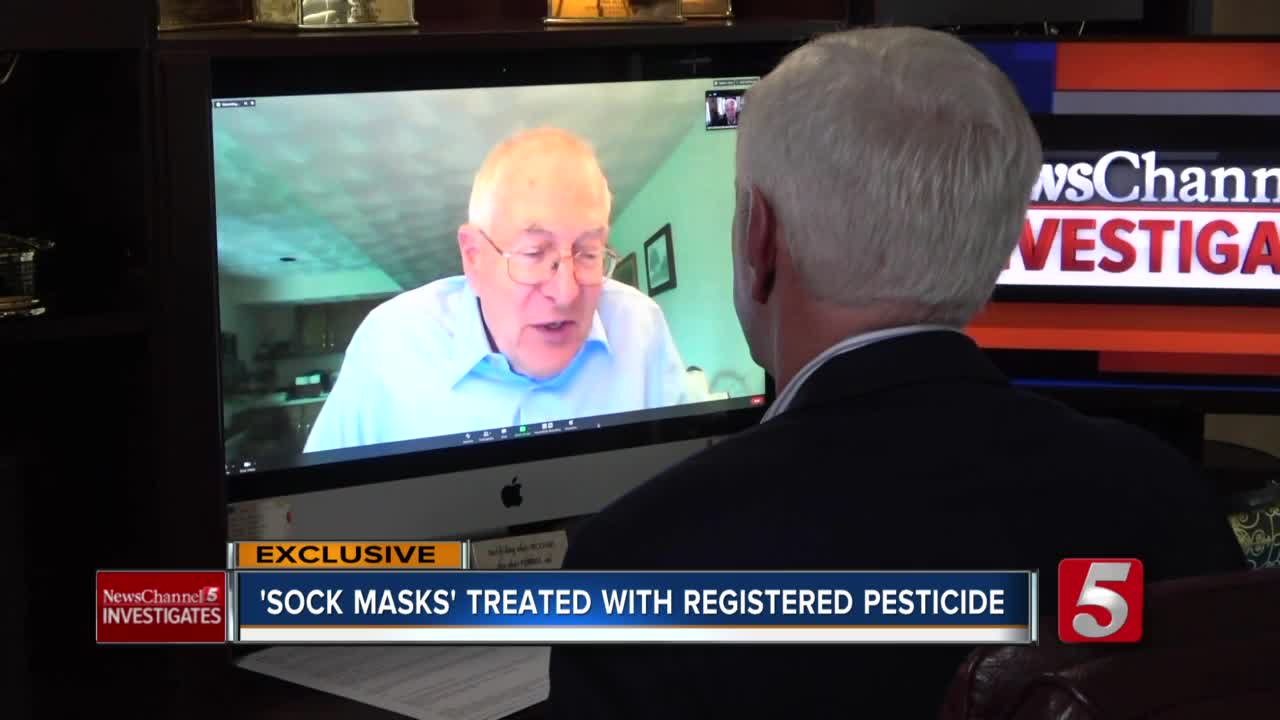 Hundreds of thousands of Tennesseans have picked up free face masks provided by the state, never suspecting that those masks might carry their own health risk. 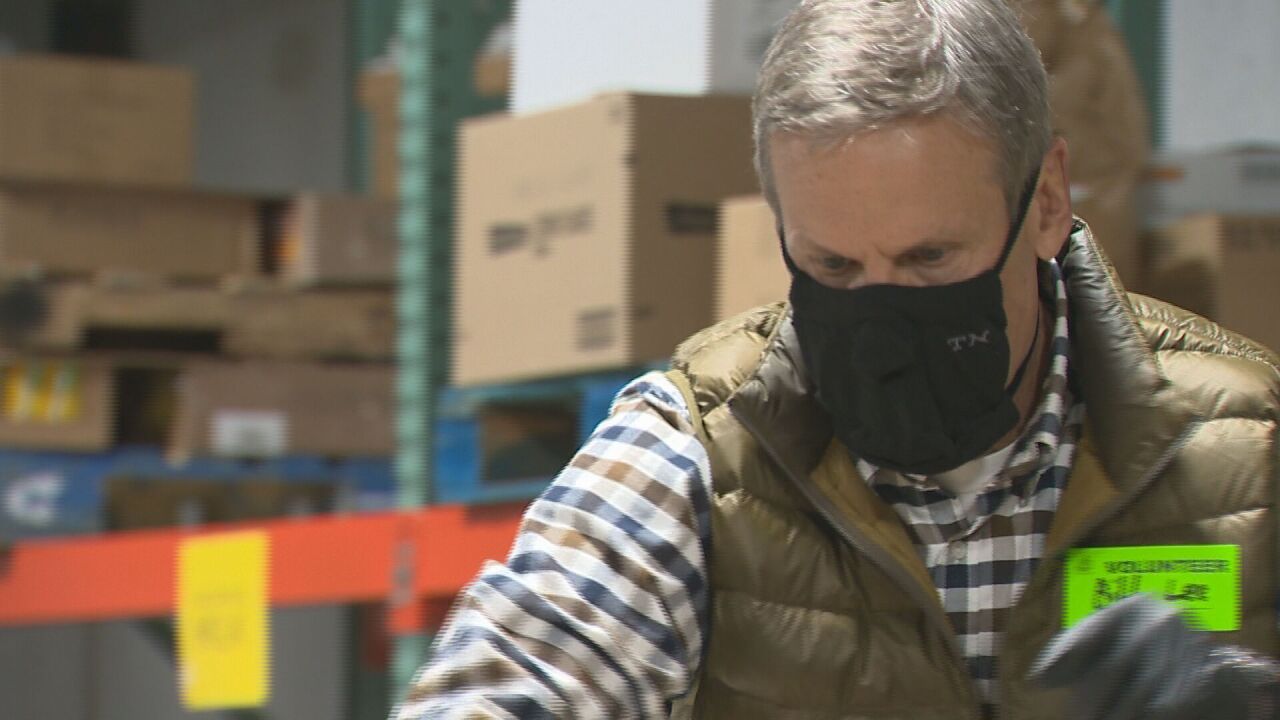 NASHVILLE, Tenn. (WTVF) — Hundreds of thousands of Tennesseans have picked up free face masks provided by the state, never suspecting that those masks might carry their own health risk.

But an exclusive NewsChannel 5 investigation has discovered that those face masks - meant to slow the spread of COVID-19 - were treated with a controversial substance that is registered as a pesticide.

That substance is an antimicrobial designed to ward off odors.

"I wouldn't wear one," said Dr. Warren Porter, a professor of environmental toxicology at the University of Wisconsin at Madison and a board member for the environmental group Beyond Pesticides.

"Nobody wants to breathe in COVID, but I wouldn't want to be breathing in something that I also knew could be poisoning my body in a relatively short period of time and might be having multi-year effects on my health."

"We wanted to get a free mask to Tennesseans who felt like they couldn't afford a mask," Lee told reporters in early May.

The governor's team boasted that the sock masks, as they came to be known, are "washable, reusable, and treated with Silvadur, a non-toxic silver antimicrobial good for 25 industrial washes."

But a search of the web reveals filings with the U.S. Environmental Protection Agency where Silvadur is registered as a pesticide that is "harmful if inhaled" and "toxic to fish."

(After this story was posted, a PR firm representing Renfro Corp. said Monday that the company uses Silvadur 930. That product, also registered as a pesticide, "causes moderate eye irritation" and is "toxic to fish." It is listed as being approved for "non-food contact uses in industrial and household woven and non-woven fibers.")

Silvadur is a DuPont product that uses silver technology that is supposed to keep fabrics fresh.

Under "how it works," DuPont says Silvadur "delivers silver ions when organisms land or form on a treated fabric."

These ions "continually release to safely kill microbes that cause odor."

Late Friday, a spokesperson for DuPont chemical company issued a statement insisting that the pesticide is "used at such low levels that the use of the fabric poses no risk to consumers."

But Professor Porter said, when positively charged silver ions are released on and in the human body, "these antimicrobial functions are also anti-cell functions."

NewsChannel 5 Investigates noted that DuPont says that Silvadur is "trusted and safe."

"Well, I'm afraid the literature would not agree with that."

"You start messing around with DNA, which is the genetic material controlling your cell operations, you interfere with the messaging and bugger up the communication that goes on in cells, like I say, you've got a molecular bull in a china shop," Porter said.

"There are all kinds of ways that it can disrupt cellular activity."

The EPA report lists nanosilver in medical breathing masks as a "high" risk of exposure.

We asked Porter, "Is there something particularly vulnerable about having it over your nose and mouth?"

NewsChannel 5 Investigates reached out to the Governor's Office and Lee's COVID-19 Unified Command for comment at 8:07 a.m., asking for a response by noon.

At 12:31 p.m., Unified Command spokesperson Dean Flener responded, "We’re working on it and should have to you soon."

At 2:04 p.m., the spokesperson finally responded: "Thank you for your patience. Please direct your questions to Renfro."

Emails sent to Renfro Corp. were not answered, and no one was available to answer the company's main phone number. Efforts to submit an inquiry through the company's online portal repeatedly resulted in error messages.

NewsChannel 5 Investigates asked Professor Porter, "If you were advising the governor of the state of Tennessee, what would you advise him about these masks?"

"Well," he responded, "I would advise him to try to get his money back."

After the story aired, the chemical conglomerate provided the following statement:

"Safety and health are core values at DuPont. We are, and have always been committed to upholding the highest standards for the wellbeing of our employees, our customers and the communities in which we operate. As a science-based company, DuPont undertakes extensive product stewardship and risk assessment protocols to ensure the safe and appropriate use of its products and materials.

'DuPont Silvadur is a safe and trusted technology used to control bacteria, mold and mildew that cause odors on fabric for more than a decade with no adverse health effects. The antimicrobial material applied to treated fabrics, such as face masks or coverings are at such low levels that the use of the fabric poses no risk to consumers.

"Silvadur has been approved by EPA to control bacteria, mold and mildew that cause odor on fabrics. Based on EPA regulations, Silvadur is registered with the agency and classified as a pesticide. The independent International Oeko-Tex Association conducted a thorough evaluation of the technology, and confirmed SILVADUR™ 930 FLEX Antimicrobial is recognized and listed as an Active Chemical Product, with biological activity, as a formulation that has been assessed to be harmless to human health, provided it is used as indicated and designated.

"DuPont Microbial Control products, including Silvadur, are not manufactured from nanotechnology nor are nanometer-sized particles intentionally added during any stage of the process. Any reference or reporting that our products are nano-based is false and misleading."

All the major health authorities are in agreement that we all need to wear nose and mouth coverings when we're going out in public around other people.

If you don't want to wear one of the sock masks, we've got instructions here about how you can make your own masks using materials you probably have around the house.