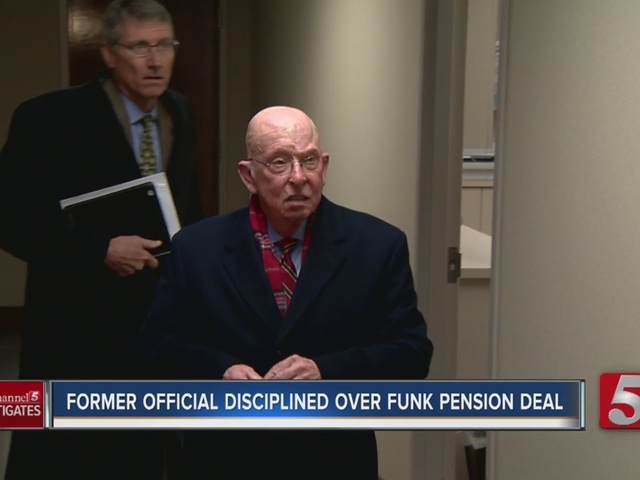 The former head of a state agency has been censured for his "misconduct" in hiring DA Glenn Funk for a part-time job.

The former head of a state agency has been censured for his "misconduct" in hiring Davidson County DA Glenn Funk into a part-time job before Funk took office in 2014.

James W. (Wally) Kirby violated an ethical rule that prohibits lawyers from engaging in "dishonesty, fraud, deceit or misrepresentation," according to the censure issued by the Tennessee Board of Professional Responsibility.

That's the agency that regulates the conduct of Tennessee lawyers.

A public censure is a rebuke and warning to an attorney, but it does not affect the attorney's ability to practice law.

The censure stems from an arrangement, first exposed more than a year ago by NewsChannel 5 Investigates, that was designed to give Funk a more lucrative pension. Kirby created a part-time job for Funk at the Tennessee District Attorneys General Conference that required little or no work.

After those stories, the prosecutors who make up the DA's Conference suspended Kirby for a month without pay. He subsequently decided to retire.

Kirby has always insisted that he did not believe he did anything wrong.

Faced with a legislative investigation, Funk agreed to switch to the less lucrative pension that he would have received without the part-time job. He also reimbursed the state for the cost of health insurance that he received while on the payroll of the DA's Conference.

An investigation by Tennessee Attorney General Herbert Slatery concluded that Funk broke the law, but the AG declined to prosecute since Funk had agreed to reimburse the state.

According to documents reviewed by NewsChannel 5 Investigates, an ethics complaint was also filed against the Nashville DA.

But it's not clear whether the Board of Professional Responsibility has taken any disciplinary action against Funk or whether it might do so in the future.

Funk's attorney, Bob Boston declined to comment when asked about those specific possibilities.

"As a matter of longstanding practice, I do not comment on legal matters involving current or former entity or individual clients, whether they relate to ongoing or past representation," Boston said in an email to NewsChannel 5 Investigates.

Last year, Boston submitted a confidential letter to the Board, insisting that there was "nothing improper" in Funk's conduct.

The letter was obtained from the files of the Tennessee attorney general in response to a public records request.