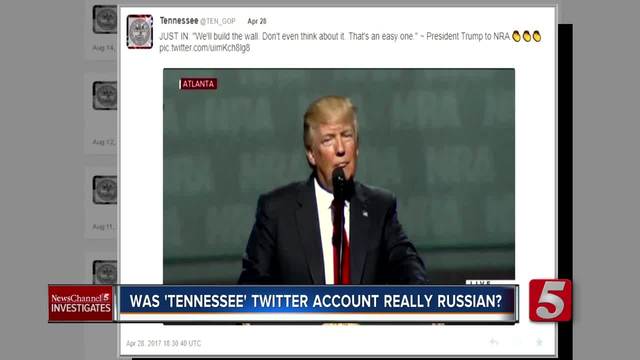 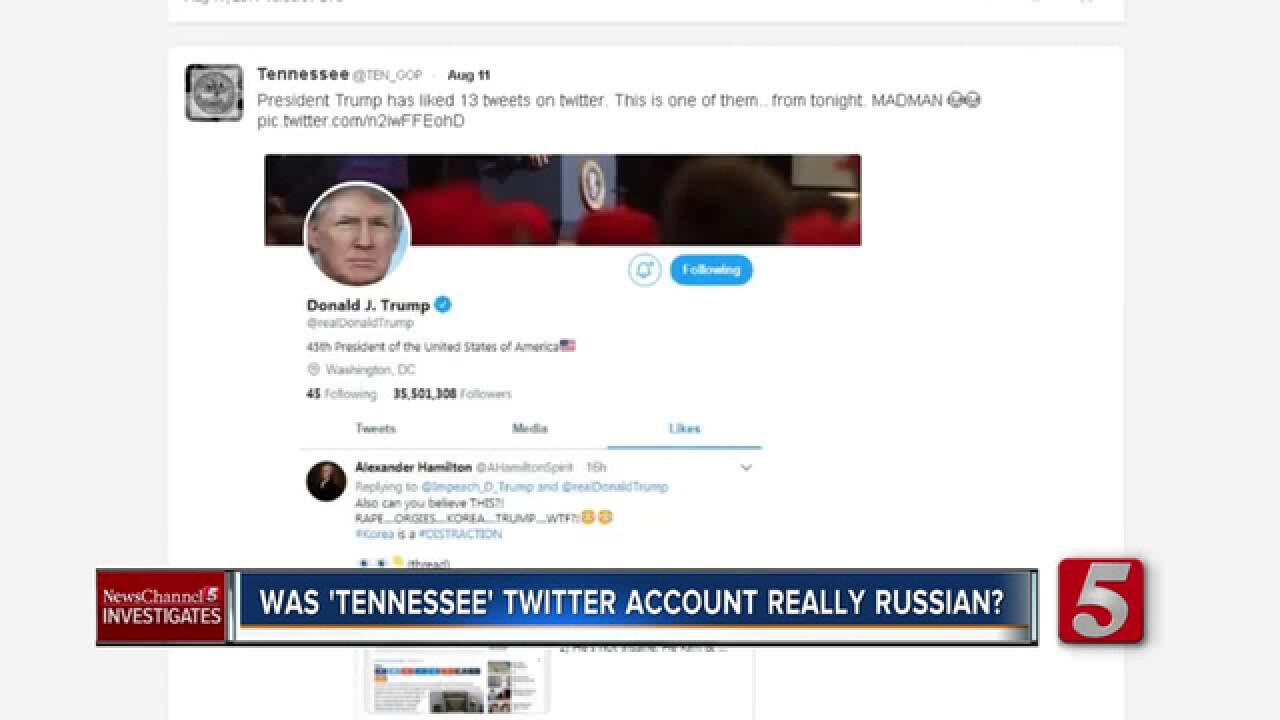 That's the allegation coming from an independent news organization inside Russia.

The account, which went by the name @TEN_GOP and claimed to be the "unofficial Twitter of Tennessee Republicans," has now been suspended.

But it developed a following that included Tennessee conservatives and may have reached into the highest levels of Donald Trump's campaign for president.

The account has now been suspended. But, back in spring, I sent message asking operators to show they weren't Russian. Never heard back /2 pic.twitter.com/yWmexQnPyA

The Twitter account emerged  in late 2015 when the battle for the U.S. presidency was well under way.

Twitter archives show that it recirculated a false story that Hillary Clinton had been fired from the Watergate investigative committee in '75, suggesting she was "still a liar."

It clearly took sides in Clinton-Trump matchup, tweeting disproven lies about her. /3 pic.twitter.com/FWJ58ZVnZj

Much of its messaging was anti-Muslim and anti-immigrant /4 pic.twitter.com/3K2h9OO2Eq

After the election, it continued to bash Clinton and establishment Republicans like Sen. John McCain, while promoting the agenda of Donald Trump.

After Election Day, it continued to trash Clinton and establishment Republicans, while promoting Trump's agenda /5 pic.twitter.com/otL1utrmrD

Among those who repeatedly shared the account's messages was pro-Trump commentator Ann Coulter, as did some prominent Tennessee Republicans.

Then, back in May, mysterious posts emerged on Twitter suggesting the account was really Russian, noting that its followers included former Trump adviser, General Michael Flynn.

Questions first emerged about @TEN_GOP on Twitter back in May. Efforts to authenticate video were not successful 11/ https://t.co/eaUN2cnhgB

Now, the independent Russian magazine RBC claims that the account was part of a Russian "troll factory" designed to influence U.S. elections.

The news organization also identified other social media accounts that, it says, were linked to the Russian operation.

Here is the graphic from the RBC report describing Russian social-media ties /6 pic.twitter.com/jj2Zq9sfxr

With Facebook and other social media sights promising to come clean about foreign activities, the @TEN_GOP account could become one of those points of investigation.

After this story was first posted, the former executive director of the Tennessee Republican Party took to Twitter to share concerns he had about the @TEN_GOP account.

"That account pushed some of the most hateful rhetoric last cycle. Glad its misdeeds are finally being reported on," Brent Leatherwood tweeted.

That account pushed some of the most hateful rhetoric last cycle. Glad its misdeeds are finally being reported on. https://t.co/m8nMheDhgV

He later added, "No idea whether it was Russian or not, but it certainly pushed ideas that weren't Tennessean. In fact, they were anti-American sentiments."

Interestingly, whoever set up the account did not use a standard abbreviation for Tennessee. Tennessee is usually abbreviated as TN or Tenn.

And, even though, it claimed to be an account for Tennessee Republicans, there was nothing on its Twitter feed about the pressing issues in Tennessee politics.

Back in the spring, NewsChannel 5 Investigates sent a message to the account operators asking them to identify themselves if they were indeed Tennesseans.

However, they never responded.