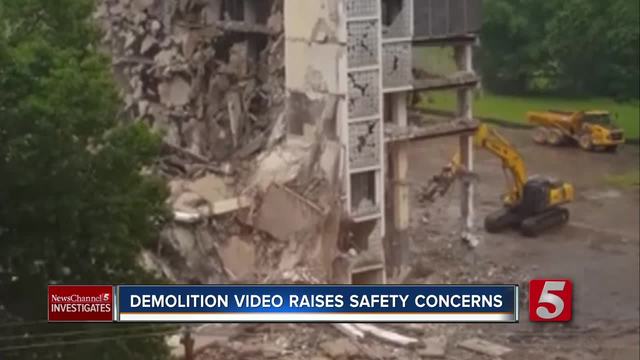 Dramatic video from a local demolition project has state regulators investigating the safety of workers at the construction site. The video shows what witnesses thought was a potentially dangerous mishap. It occurred in the shadow of Saint Thomas West Hospital near Belle Meade. 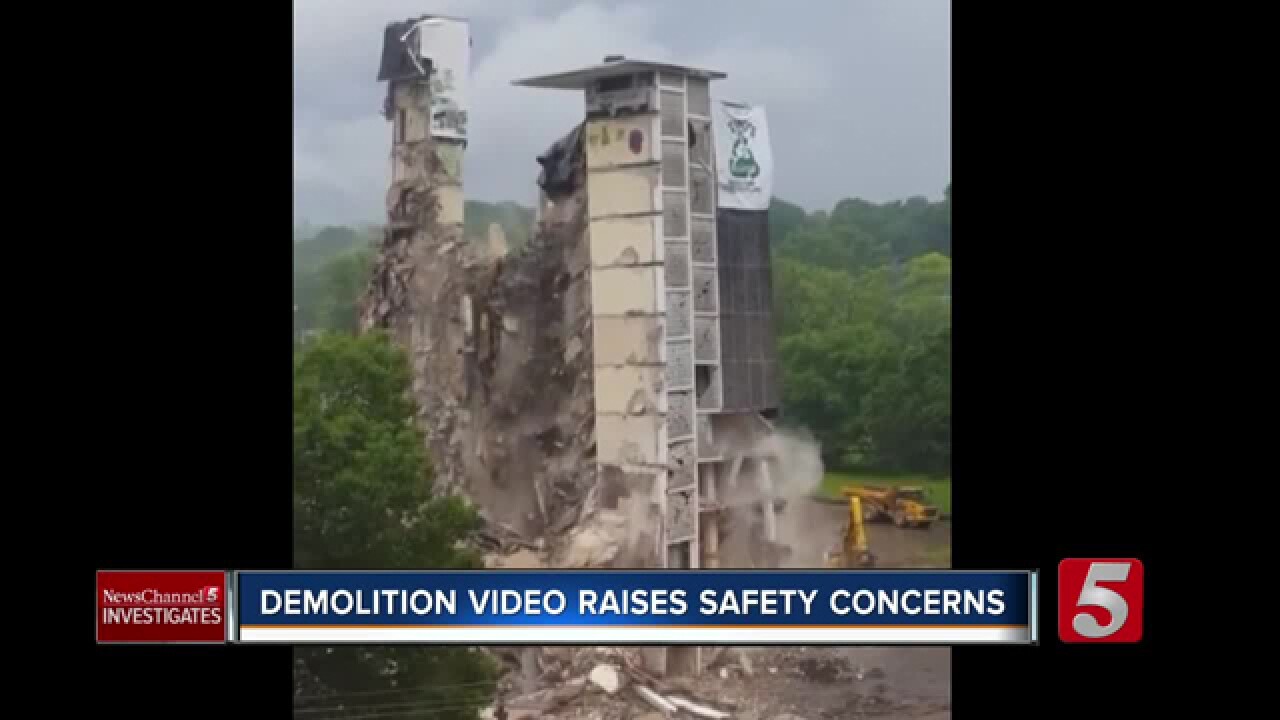 Dramatic video from a local demolition project has state regulators investigating the safety of workers at the construction site.

That video, obtained by NewsChannel 5 Investigates, shows what witnesses thought was a potentially dangerous mishap.

It occurred in the shadow of Saint Thomas West Hospital near Belle Meade where workers were bringing down a once-futuristic, 11-story apartment building.

But the methodical task of hauling away debris from the old Imperial House reveals no hint of the drama of the demolition itself.

"All we could think of is somebody got hurt right there," said Dean Graves who shot video from a nearby medical office building where he works as an IT professional

He watched as workers in heavy-duty excavators knocked down key support beams, causing parts of the building to crumble into a cloud of dust and debris.

They were chipping away at the building, and it was coming down fairly easy," Graves recalled.

"But that last part was not coming down very easily. So you could tell they were having some trouble with it."

Then, as the building begins to crumble, the excavator attempts to make a quick retreat, as the core of the building topples like a tree in the forest toward the worker.

"I was in there with another doctor at the same time," Graves said. "We both thought the same thing: that's coming over on top of him. I mean that's exactly what our thought was."

On the video you can hear one man saying: "Hope he's ok 'cause that came back over on him."

The other responds, "Sure did."

Graves told NewsChannel 5 Investigates, "It looked like he was hit."

"I did see a lot of the workers go over there. I don't think he was hurt terribly bad or else I think there would have been a lot more scurrying."

After NewsChannel 5 Investigates shared the video with the state, the Tennessee Occupational Health and Safety Administration (TOSHA) opened an official investigation.

"The images of this building demolition raise serious concerns for the assistant commissioner regarding the safety of workers at that site," said Chris Cannon, spokesperson for the Tennessee Department of Labor. TOSHA is part of that deparment.

While the owner for the contractor, Tiny's Demolition, never returned our call, a worker there insisted that what we see in the videos was a legitimate way to bring down a building without using explosives.

"It's called tripping," he explained.

"Is that a safe practice?" we asked.

The worker claimed that TOSHA had closed its investigation after finding no wrongdoing.

In fact, the state tells NewsChannel 5 Investigates that this is still very much an open investigation.

Dean Graves says he heard talk that the worker in the excavator was taken to the nearby St. Thomas emergency room to be checked out.

But, if that happened, the state says it was never reported to them.