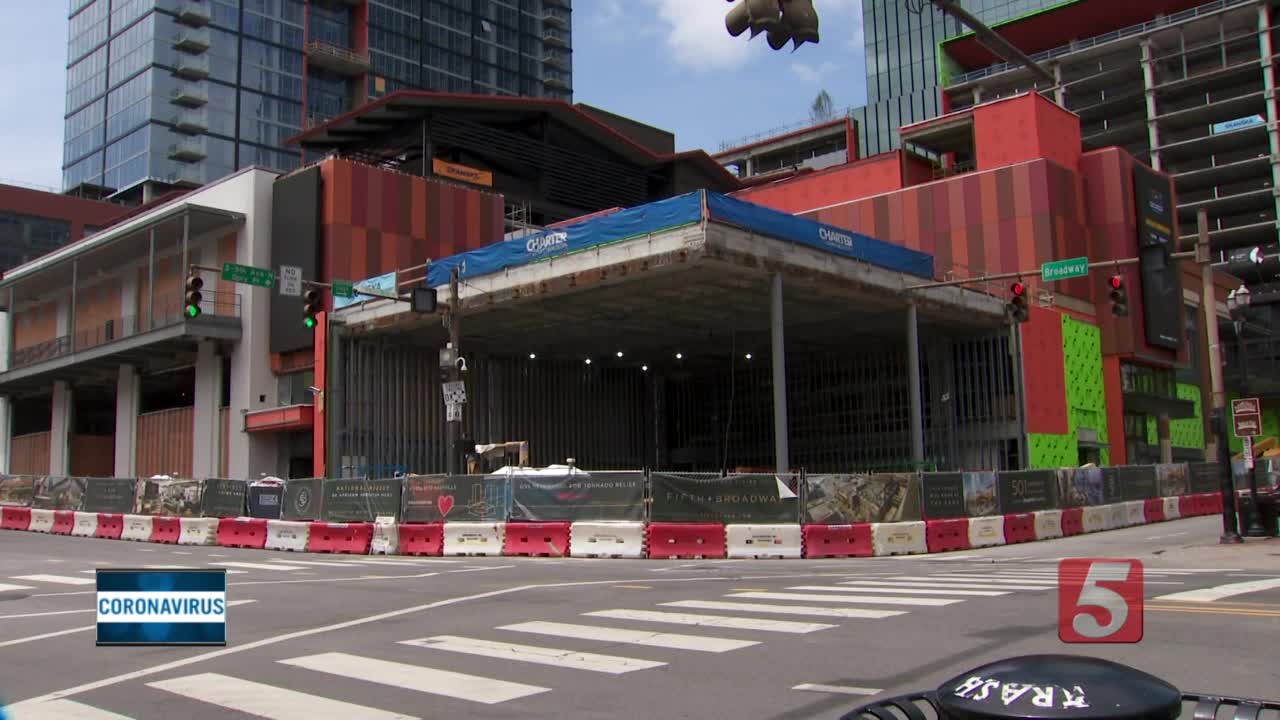 Construction workers at 5th and Broadway voice concerns after at least two workers tested positive for COVID-19. The site reopened Tuesday after being closed for three days for "extensive cleaning." 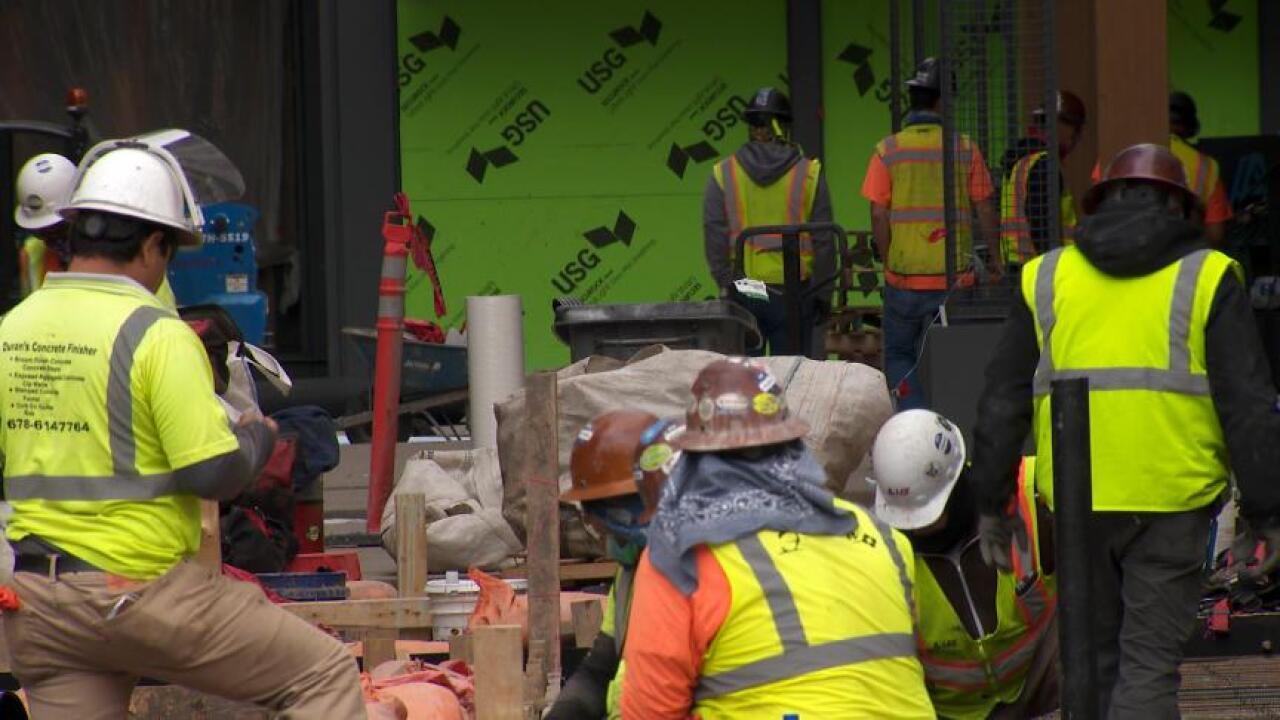 NASHVILLE, Tenn. (WTVF) — The general contractor overseeing of one of Nashville's largest construction sites closed it over the weekend for extensive cleaning.

Skanska suspended operations at 5th and Broadway for three days following concern from employees after at least two workers tested positive for COVID-19.

Workers at the site contacted NewsChannel 5 Investigates concerned about a lack of transparency involving COVID-19 issues.

Parts of the 6 acre site across from the Ryman Auditorium are scheduled for completion later this year.

One worker hid his identity and came forward to speak with NewsChannel 5 Investigates.

"Why are you hiding your identity?" NewsChannel 5 Investigates asked.

"For fear of any type of retaliation against me," the worker responded.

"The reason I'm reaching out is so we can hopefully get more transparency and actual facts," the worker said.

In early April, workers secretly recorded a contentious meeting in which managers told them about two positive COVID-19 cases on site.

"Some of us are hearing about this for the first time three weeks after the incident. Why?" workers asked managers in the video.

The manager told workers, "Guys, I am just as concerned about this as you."

A representative from Skanska, the general contractor at 5th and Broadway, said they had made a mistake by not telling workers immediately after learning a worker had tested positive.

A worker in the meeting said, "We've got to have information to come in here and put our lives on the line."

The manager in the meeting responded, "Absolutely, Absolutely."

The manager also said, "The decision made going forward is to be completely transparent."

Skanska sent a statement to NewsChannel 5 Investigates saying the positive test came from an "overnight delivery" person who worked in a separate building from the workers in the video.

The company said "Safety is priority one" and "We have since updated out protocols to have regular communication with all groups across the site."

Ethan Link, with the Central Labor Council of Middle Tennessee, said he has heard from workers at many downtown sites, but he singled out 5th and Broadway.

"No one really knows how safe they are right now," Link said.

"If you went and asked ten different workers on that project what they know about COVID exposures, I think you will get ten different answers. And that's a problem," Link said.

The worker told NewsChannel 5 Investigates it is not uncommon for people to be sent home because they are showing symptoms, but then there is no communication about whether the person was actually sick or it was a false alarm.

"We touch things for a living. We go around the building and we tough everything in the building," the worker said.

He is worried about bringing the virus back to his family.

NewsChannel 5 Investigagtes asked, "Why don't you just walk off the job?"

The worker responded, "Because you can't get unemployment if you just quit. So I have to provide for my family."

Skanska said it closed the entire 6 acre site through Monday "for extensive cleaning."

The company said it has "mandatory temperature checks", "mandatory face coverings" and has "zero tolerance for working sick."

Link pointed to the large number of complaints the state has received from workers across the Tennessee.

"Companies right now are self policing these guidelines," Link said.

He said the Tennessee Occupational Safety and Health Administration should provide much more oversight.

"OSHA needs to be very much more involved in those downtown construction sites," Link said.

Workers on site say the uncertainty is taking a toll.

"I hear about people arguing with their families, their loved ones, their wives, people who take care of their parents. They're worried about bringing it back home," the worker said.

The full statement from Skanska as well as responses to some of our questions is below:

Safety is priority one for Skanska. We want nothing more than for our employees and subcontractors to be informed, healthy and aware. This is a 6.2-acre construction site with three separate components (apartment tower, office tower, and retail and entertainment complex). When we received word on April 2nd of an overnight delivery to the apartment tower by someone who tested positive for COVID-19, we immediately identified and quarantined the individual who had direct contact, fully traced the areas of impact, closed the floors of the apartment tower on which he was present, and informed those who were working on the apartment tower. We have since updated our protocols to have regular communication with all groups across our site.

The following answers to your questions will fill in more details about the timeline and overview our safety protocols.

Apparently the worker who tested positive was onsite on March 25. He tested positive on April 2. Workers were told after that. What is the communication timeline for that case?
On April 2:
· Skanska received notification from a subcontractor that one of their workers had tested positive for COVID-19.

· The subcontractor informed Skanska that the individual had made an overnight delivery to the Fifth + Broadway apartment tower jobsite site and it was determined they had come into contact with one other person. That person was immediately notified and told to self-quarantine for 14 days.

· Skanska verbally informed the other subcontractors working on the apartment tower of this positive test result.

· Following CDC recommendations, the floors the subcontractor employee visited were closed and isolated on April 2nd for four days.
On April 6:
· Floors reopened after isolation.

· Skanska sent a follow up email notification to subcontractors working on the apartment tower outlining incident and protocols.

What exactly is being constructed at that site and how many workers are present? When is the scheduled completion date?

Three different components over 6.2-acres: an apartment tower, an office tower, and a retail and entertainment center. The apartment complex will be completed first in the coming months.

What precautions are being taken on that site?

· Mandatory temperature check at the gates

· Cancellation of all large gathering on site meetings

· Four medics on site every day

· Hand sanitization centers on every floor where work is being done

· Encouraging social distance for all workers on site and in elevators

What do you say to workers who say there is not enough transparency?

COVID-19 is a new phenomenon that we are continually learning about daily. We continue to develop best practices in accordance with all legal requirements and evolving CDC guidance. The safety and well-being of everyone on site comes first. We are very proud of our track record of safety on this large scale, multi-year project. Our intent is to be transparent and proactive. Since the April 2nd positive test, our Local Coordination Response Team has added additional communications check-points to ensure immediate notification, no matter what component of the project site may have a suspected case. In addition to a mandatory “all-hands” call with all subcontractors, Skanska sends out emails to workers onsite almost daily with relevant COVID-19 updates, including every time a worker from the site gets tested for COVID-19, test results (positive or negative), and area closures for high-grade sanitization.

Has the project been shut down because of COVID-19?

The project has not been shut down by any governmental agencies. We have worked cooperatively and transparently with local government and public health agencies throughout the COVID-19 pandemic. Over the weekend, we have decided to take the opportunity to suspend operations for the entire 6.2-acre project site for 72 hours for extensive cleaning. No workers are allowed on site during this period. During this time, an advanced cleaning of primary footpaths, gathering spots and all other areas of density will be conducted. The site will be fully operational again on Tuesday, May 5th. Once it reopens, all elevated safety measures will continue, including mandatory temperature checks for all workers at the entrance gates, where medical clearance bands will be issued.