Tenneco Workers Worried They Put Their Kids At Risk 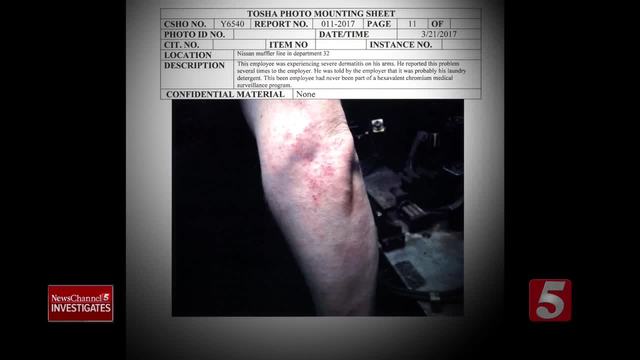 Workers at the Tenneco plant in Smithville, Tennessee have been told they were exposed to dangerous levels of hexavalent chromium - which can cause lung cancer. 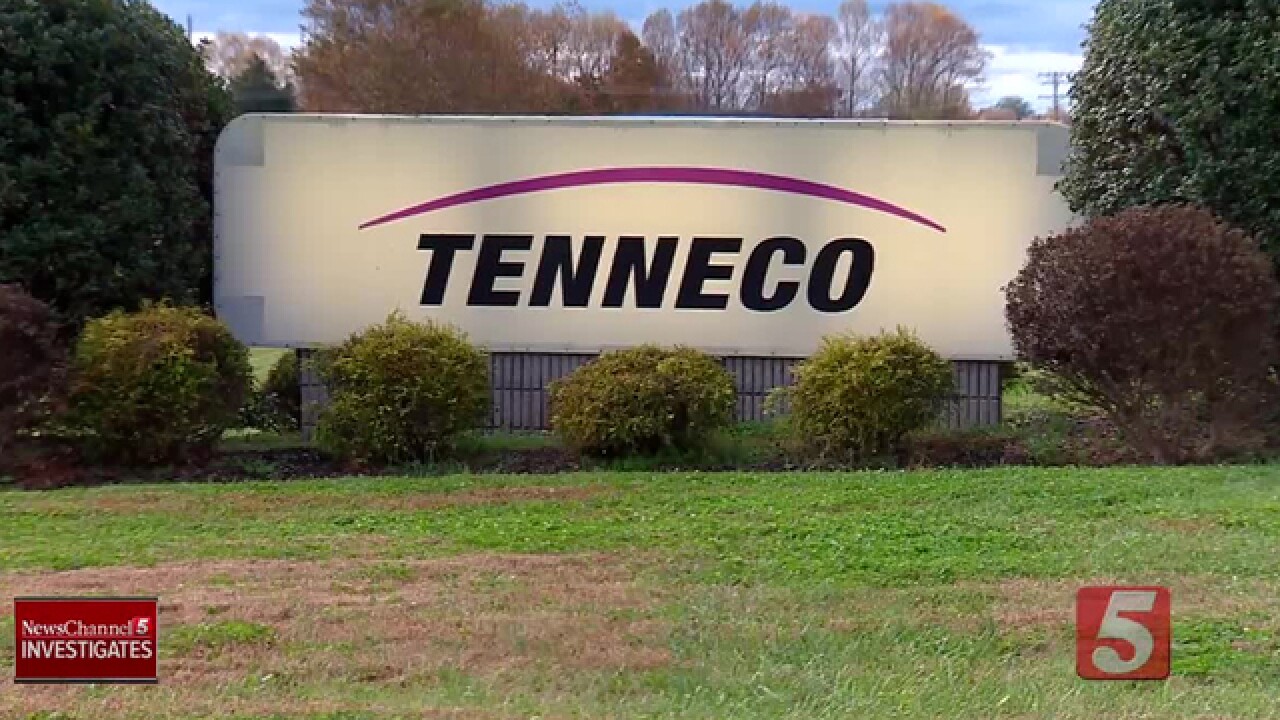 Workers at an auto parts manufacturer in Smithville, Tennessee have been exposed dangerous levels of a hexavalent chromium - which can cause lung cancer.

They told workers the exposure may also have impacted their families because they may have taken cancer causing dust home on their uniforms.

The Tennessee Occupational Safety and Health Administration (TOSHA) cited the plant for 20 serious violations in March, many involved exposing employees to hexavalent chromium.

NewsChannel 5 Investigates discovered Tenneco, which is a global company headquartered outside of Chicago, Illinois, has a other violations involving hexavalent chromium at its plants.

Ryan Johnson has been a welder at the Smithville plant since 2011.

"First thing I see in the morning is my daughter. She comes running up to me and I hold her," Johnson said.

He hugs his daughter after finishing his overnight shift.

"​I'm afraid that I've actually given her a little bit of exposure to it," Johnson said.

The plant held a series of remarkable meetings beginning last spring in which they told employees that some will likely get cancer because of air quality issues at the plant.

But even more disturbing they told employees their families could also get cancer just from being around them.

​This last safety meeting it was confirmed to us that we are taking it home to our families," Johnson said.

Workers can breath in the dust and get it on their clothes.

"The last thing I want to do is have my daughter in my arms while she's hugging me and her sitting there breathing in the dust right off my uniform," Johnson said.

During TOSHA's inspection in March, regulators found welding booths with "minimal ventilation" and no warning signs about hexavalent chromium.

Johnson says he is already suffering symptoms of over exposure.

​"The thing is the nose bleeds and the dermatitis," Johnson said. "Everything else will be internal."

Inspectors took pictures of one welder's arm and wrote that he suffered from severe dermatitis.

The employee said his supervisors told him "it was probably his laundry detergent."

NewsChannel 5 Investigates asked Johnson, "Do you worry you will get cancer?"

Johnson said, "I'm not going to lie. It terrified me when they first told me about this."

Tenneco paid a $21,600 dollar fine for the violations at its Smithville factory just last month.

But we found the company has been cited for improper testing for chromium at its Michigan plant.

Their largest fine came in Hartwell Georgia, where they paid $90,000 for exposing employees to the cancer causing mineral.

NewsChannel 5 Investigates asked, "Why does this keep happening?"

Steve Blow with Tenneco's corporate communications responded, "It's happened at two plants, so clearly in those instances there were some things that could have been done better and those fixes were put into place."

We asked, "Is the Smithville plant a safe place to work?"

Blow responded, "It is."

We followed, "Even with those over exposure levels?"

The spokesperson said, "With the safety equipment and the safety measures we put in place, it is a safe work environment."

After Hartwell, Georgia fine in 2014, OSHA sent out a news release stating Tenneco's repeated violations indicated it was not concerned with employee health.

It stated Tenneco was being placed on its Severe Violator Enforcement Program, which is reserved for serious repeat offenders.

​But Tenneco officials said they met with OSHA gave them more information.

As a result the company was never put on the program.

Leo Chang has worked at the Smithville plant since September.

He believes the company goes into rural communities because people there are desperate for jobs.

NewsChannel 5 Investigates asked, "Does it make you angry?"

​Chang responded, "Oh you better believe it. This is unacceptable."

Ryan says they now use masks but questions whether they're really effective.

He changes clothes and washes his face and hands before coming home.

The company has asked TOSHA for more time to correct ventilation at the plant.

Johnson said, "There's no better paying job than this anywhere around."