Dream Hotel focuses on a complete hotel experience for guests 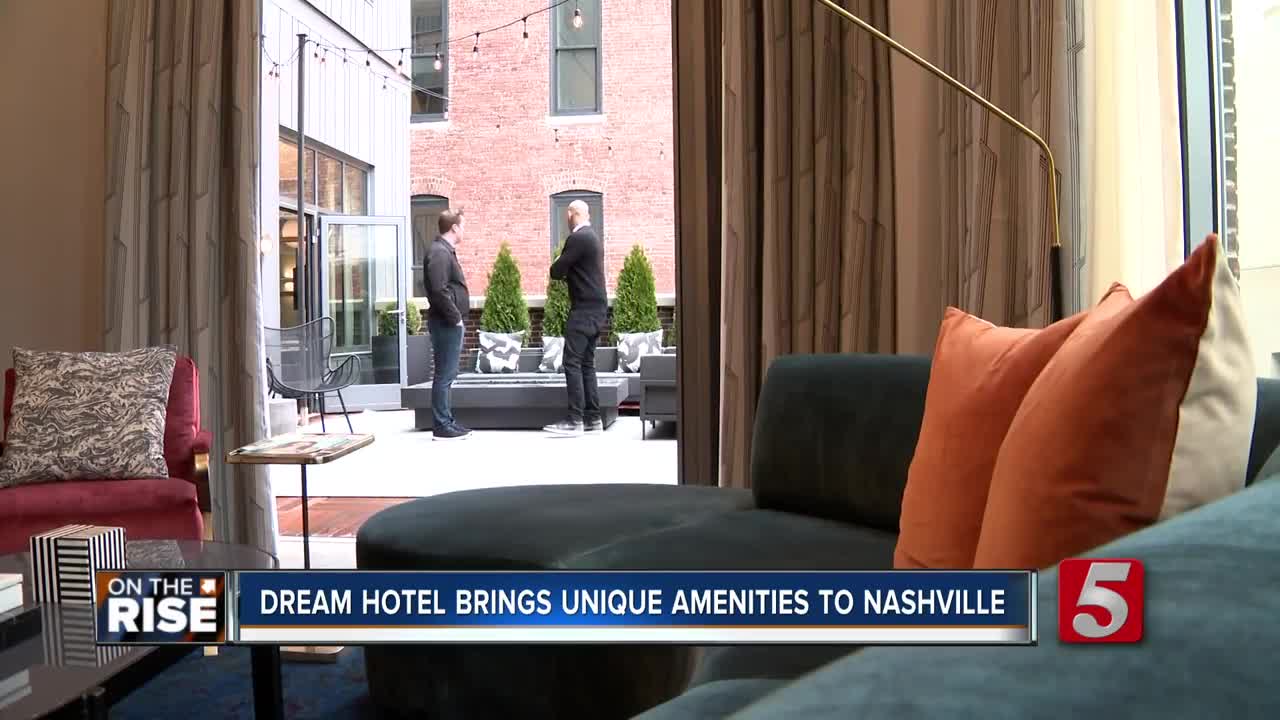 NASHVILLE, Tenn. — Dream Nashville has officially opened in Nashville, bringing another hotel and plenty of food, bars, and nightlife options to the Printers Alley area in an increasingly competitive hospitality market.

“Our job is to try to offer an experience to the hotel guest who’s very savvy and he’s looking for something a little more than a place just to rest their head,” Michael Lindenbaum, executive vice president for Dream Hotel Group, said. “What we try to do is bring this sort of symphony of experience together in one place.”

That symphony of experience includes 8,000 square feet of entertainment space, including seven dining and nightlife options, ranging from a full-service restaurant to night clubs.

“(We have) a live music and entertainment theater downstairs, we have a cocktail den with an upright piano, we have a gourmet sandwich walkup window for that sort of late-night bites that are needed,” Lindenbaum explained.

For Dream Nashville, they didn’t just want to bring another hotel to Nashville, but they wanted to bring something special to Music City, a city which they knew was a target market for hospitality.

“We had our eyes on Nashville for a long time, we’ve been reading about the growth in Nashville for many years, and we were hoping that we could find a project,” Lindenbaum said. “Nashville has 40% of its business coming from groups. Now those groups are sometimes corporate during the week, Tuesday, Wednesday, Thursday, and leisure on the weekends. Obviously, bachelorette capital of the world, starting to see that season kickoff.”

With 168 rooms, including 21 suites that include amenities such as poker tables, custom beer on tap, and even an outdoor grill with an on-call barbecue butler in one room, the rooms themselves are unique. They’re even more unique since they are all located in historic Printers Alley, where the history dates back more than a century.

“We repurposed and renovated an existing hotel, the first boutique hotel in Nashville built in 1981 called the Utopia,” Lindenbaum said, adding that they took the historic preservation of the buildings and the area as a whole extremely seriously. “We were trying to think about, hey, how can we be really respectful to the businesses that are already here that are wildly successful as well as how could we offer maybe some additional programming?”

Other amenities include a collaboration with The Lincoln Motor Company to offer guests complimentary car service within a 5-mile radius of the hotel during the gusts stay.

The iconic London fashion brand AllSaints opened a store in the hotel with an entrance coming from Printers Alley that also serves as the entrance to one of the entertainment venues.

theory11 is working with the hotel to bring magic shows to guests.

A coffee and pastry shop has taken their game to another level by allowing guests to get pictures and logos ‘printed’ into their coffee, and at the bars, the hotel stamps ice cubes with “1891” to celebrate the history of their building.

The main entrance for Dream Nashville is located on 4th Avenue, with a valet service available, and they celebrated their grand opening on Thursday with a performance from The Chainsmokers.