Opioids Cause Problems For Booking, Jails 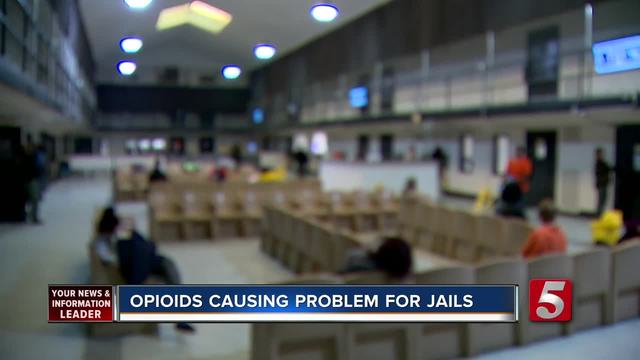 Opioids caused Hill Detention Center in Nashville to quadruple the amount of ambulance calls for bookings where the person arrested had overdosed on drugs.

Opioids caused Hill Detention Center in Nashville to quadruple the amount of ambulance calls for bookings where the person arrested had overdosed on drugs.

According to Sheriff Daron Hall, law enforcement are encountering more people who try to consume drugs before their arrest to avoid potential charges. However, the act of eating prescription pills or using heroin results in overdoses that have to be treated at booking, or often times, by hospital staff.

"It's not unusual for people who are being arrested to ingest what they've been using to avoid the arrest, believe it or not," said Hall. "And that ingestion, a few hours later, can kill them."

From the arrest to serving jail time, Hall said jails have seen an increase in the number of overdoses they have to deal with. Jail nurses keep naloxone on hand to treat people who they think have overdosed on drugs. Often times, it's difficult to tell who has overdosed or who is just drunk.

"The first 72 hours of someone's stay is critical. And you're almost directly observing their behavior and that's not an easy way to make a judgment call sometimes," said Hall.

Staff at the Hill Detention Center said this takes a heavy toll on the employees.

"In the summer time it's more prevalent than the winter time," said Sgt. Lionel Farley. "Sometimes they're in an excited delirium or they'll show tiredness or sometimes an aggression will take over them."