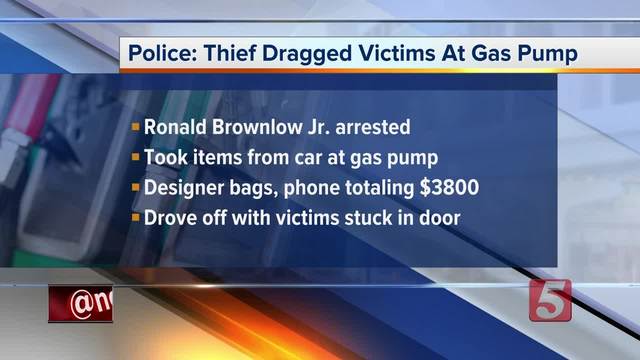 A man and woman were injured after they tried to chase down a thief at a gas pump.

The pair confronted Ronald Brownlow Jr., 51, after he allegedly stole several designer items from the woman's car at the gas pump. According to a police affidavit, the man stole five Louis Vuitton purses, a cosmetic bag and an iPhone from the car, worth a total value of $3800.

Police said Brownlow closed the door of his car on the man and woman when they approached him. He then dragged them with his car.

Police later watched the incident on surveillance cameras at the gas station.

The woman suffered several large, bloody wounds on her legs. The man suffered a wound above his left eye.

Brownlow is charged with aggravated assault and theft.