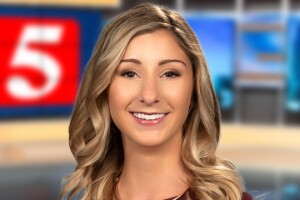 In June of 2018, Hannah earned two awards from the AP for her series and feature reporting.

Before moving to Nashville she worked in Central Pennsylvania as a general assignment reporter at WGAL. Hannah covered big stories like the Penn State sex abuse scandal, the line of duty death of a US deputy marshal and Bill Cosby’s sexual assault trial. She also produced the station’s first mini-series, which spotlighted student life at the Milton Hershey School in Hershey.

Hannah grew up in Rhode Island and graduated from The Newhouse School at Syracuse University. Her career first took her to Burlington, Vermont where she worked at WPTZ as a reporter and anchor. During that time, she covered the Shawshank Redemption-style prison escape in Dannemora, New York that resulted in a three week manhunt. The assignment made national headlines.

Hannah says another highlight in her career was when she traveled to London for the 2012 Summer Olympics and worked for NBC.

When not at work, she enjoys photography, the ocean, road trips, her cat named Puppet and spending time with family.